US a partner in bloodshed with Jerusalem move, Erdoğan says 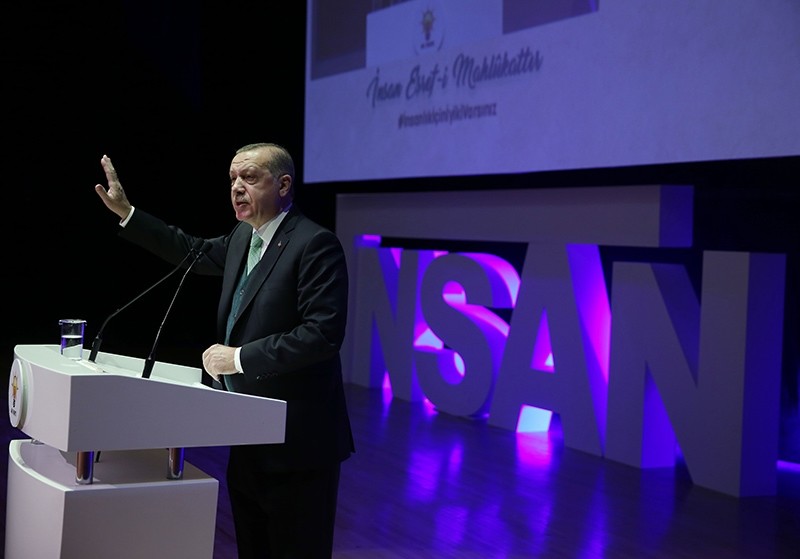 President Recep Tayyip Erdoğan said Monday that the U.S. is responsible for the bloodshed in Jerusalem after clashes erupted in the city following U.S. President Donald Trump's decision to recognize it as the capital of Israel.

"Those who turn Jerusalem into a prison for Muslims and members of other religions will never be able to clear the blood off their hands," Erdoğan said at an event held in the capital Ankara.

Stressing that Washington is also responsible for the bloodshed in the area, the president said of Trump's decision to move the U.S. Embassy in Tel Aviv to Jerusalem: "The U.S. has become a partner in bloodshed by recognizing Jerusalem as Israel's capital. We definitely do not recognize this decision, we will not recognize it. President Trump's statement does not bind us, nor the world of Islam."

Emphasizing that an Israeli state did not exist in the 1940s, Erdoğan said today the picture is entirely different. The president contended that the West divided Palestine in time and turned it into a state composed of tiny pieces. "I wish that the reactions of the Western countries against the United States' Jerusalem decision constitute a breaking point in their inconsistent Israeli policy," he added.

Erdoğan underlined that the continuation of vandalism and oppression in Jerusalem is not possible. The president warned that those who deem themselves as the owners of the city will not even be able to find a tree to hide themselves behind.

The president vowed that the struggle will not be finalized until a Palestinian state with the borders of 1967 is established. "This struggle will not end until the establishment of a sovereign and independent Palestinian state, whose capital is the city of east Jerusalem, within the borders of 1967. There is a role of the U.S. and European politics that supports Israel's unjust occupation and settlements in what is happening today."

The ongoing Jerusalem dispute will be a decisive point in determining who is sincere in its quest for peace, the president said. "In this case, nobody who is not on the side of the oppressed and righteous can say a word about human rights or global and regional peace. We will follow the declarations and statements on the subject of Palestine and Jerusalem, and we will give everyone their note accordingly."

The president's tone over the weekend was even harsher. "Israel is a perfect invader state," Erdoğan said. He also called Israel "a terrorist state." "We won't leave Jerusalem to the mercy of a child-murdering country."

U.S. President Trump stoked the flames of a new crisis in the region after he signed a decision to move the U.S. Embassy in Tel Aviv to Jerusalem, and recognizing the latter as the capital of Israel. The sensitivity of the Jerusalem site comes from the fact that it is to Jews known as the Temple Mount and to Muslims as Haram al-Sharif (Noble Sanctuary). The site includes the Al-Aqsa Mosque, the third-holiest site in Islam, and the golden Dome of the Rock. It was also the site of an ancient Jewish temple, the holiest place in Judaism.

Jerusalem was first put under international sovereignty and control with the 1947 U.N. Partition Plan, which recommended the division of historical Palestine between Jewish and Arab states in order to end the conflict in the region. The U.N. opted for a special status, as Jerusalem is holy to Jews, Christians, and Muslims. However, during the 1948 Arab-Israeli war, Israeli forces declared western Jerusalem part of their state, ignoring the U.N. recommendation.

Erdoğan also touched upon the topic of Turkey's 11.1 percent growth rate in the third quarter of 2017.

Turkey became the fastest growing economy among G20 countries after boasting an 11.1 percent growth in the third quarter of 2017, according to a Turkish Statistical Institute (TurkStat) report released Monday.

"This growth rate is the best response to those who try to portray Turkey as a weak country."

Erdoğan added that Turkey aimed to reach at least 7 percent of economic growth by the end of the year.