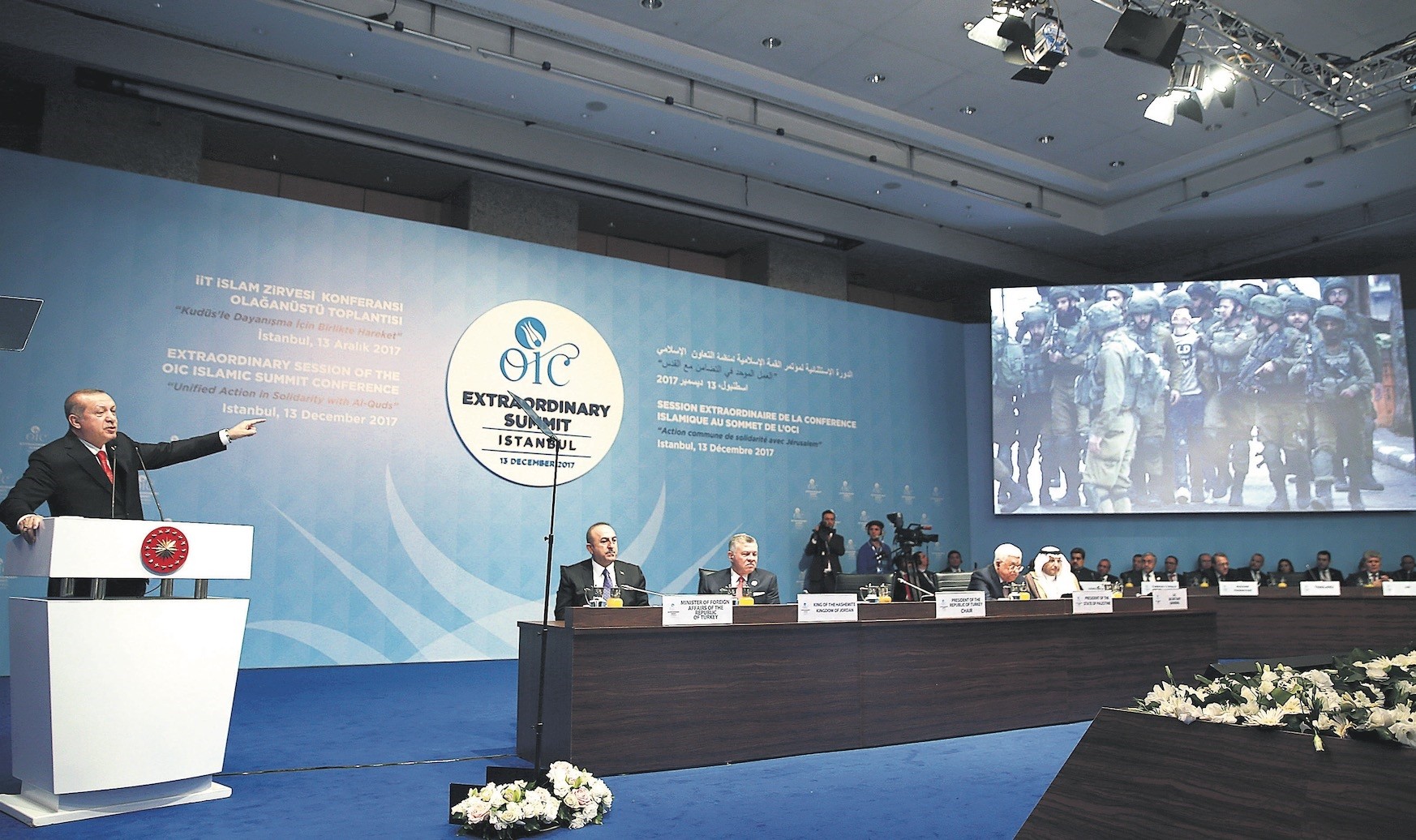 President Erdou011fan gives an opening speech at the Extraordinary Summit of the Organisation of Islamic Cooperation (OIC), Istanbul, Dec. 13.
by Daily Sabah with Agencies Dec 14, 2017 12:00 am

Leaders of the Muslim world gathered at an emergency summit in Turkey yesterday where they announced in a declaration that they recognize Jerusalem as Palestine's capital "under occupation" and urged the U.S. to withdraw from the peace process. The Organisation of Islamic Cooperation (OIC) said in the declaration that the leaders "reject and condemn in the strongest terms the unilateral decision by the president of the United States recognizing al-Quds [Jerusalem] as the so-called capital of Israel, the occupying power; reject it as null and void legally, and consider it an attack on the historical, legal, natural and national rights of the Palestinian people, a deliberate undermining of all peace efforts, an impetus for extremism and terrorism, and a threat to international peace and security."

The statement continued that OIC member country leaders "declare East Jerusalem as the capital of the state of Palestine and invite all countries to recognize the state of Palestine and East Jerusalem as its occupied capital." The statement also declared that the OIC "hold[s] the U.S. administration fully liable for all the consequences of not retracting from this illegal decision and regard it as an announcement of the U.S. administration's withdrawal from its role as a sponsor of peace and its realization among all stakeholders and an encouragement of Israel, the occupying power, to continue its policy of colonialism, settlement, apartheid and ethnic cleansing it has been practicing in the occupied Palestinian territory since 1967, and in the city of al-Quds [with the] Noble Sanctuary at its core."

The summit began with an opening speech from President Recep Tayyip Erdoğan, as Turkey is currently the OIC term president.

"I call on all states that respect international law and equity to recognize Jerusalem as the capital city of Palestine that is under occupation," Erdoğan said.

Turkey called on the OIC to convene after the U.S. President Donald Trump last week announced that he recognizes Jerusalem as Israel's capital instead of Tel Aviv, and that the U.S. Embassy will be relocated to Jerusalem.

Erdoğan restated Turkey's opposition to Trump's move, saying that the U.S. administration has rewarded Israel for its "terrorist activities" and that Trump's Jerusalem move is not binding for Ankara, calling it "null and void." He also said that Muslim countries would never give up on the sovereignty and independence of Palestine.

"While the occupying state is being recognized, there is no logical reason for the party that wants peace, that lives in one-fifth of historical Palestine to not be recognized," Erdoğan said, reiterating that Jerusalem and the Al-Aqsa Mosque compound are red lines for the Muslim world.

He also used historical maps of Palestine, showing how the Israeli occupation of Palestine has taken place over time from the U.N. partition of 1947 to present. Erdoğan had also used the same maps throughout the week in several speeches, arguing that once large Palestine has been invaded by Israel despite international law and resolution and that Palestinians have been stuck in small pieces of land as a result of Israeli settlements.

Jerusalem was first put under international sovereignty and control with the 1947 U.N. Partition Plan, which recommended the division of historical Palestine between Jewish and Arab states in order to end the conflict in the region. The U.N. opted for a special status, as Jerusalem is holy to Jews, Christians and Muslims. However, during the 1948 Arab-Israeli War, Israeli forces declared West Jerusalem part of Israel, ignoring the U.N. recommendation.

Erdoğan also criticized Trump for ignoring Israeli atrocities during recent attacks on Palestinian protesters. He said: "Mr. Trump, what else should I tell you?" as he pointed to the overhead slide displaying a picture of a 14-year-old Palestinian from Hebron in the occupied West Bank, being violently dragged away by at least a dozen Israeli soldiers.

Erdoğan went on to accuse the U.S. of "standing by those who make peace impossible" and "playing into the hands of all fanatics" at a time of an intense fight against terrorism.

"Israel is the only state supporting the illegal decision of the U.S. We thank everyone that has stood against it. Everyone I have spoken to, including the pope, has confirmed their stance against the decision," he said. "Peace in our region and in Jerusalem will only be established through the efforts of upright, honest and fair people from every nation and faith."

OIC Secretary-General Yousef bin Ahmad al-Othaimeen reiterated his call on countries that do not recognize Palestine as a sovereign state to do so. Denouncing the U.S. move on Jerusalem, Othaimeen said it destroys the U.S.'s role as mediator in the peace process. He warned that the move will ignite violence in the region. "Jerusalem has been an inseparable part of Palestine since 1967," he said.

The OIC was established during a historic summit in Rabat, Morocco in 1969 following an arson attack on Al-Aqsa Mosque in occupied Jerusalem. The mosque was set on fire by an Australian Christian named Michael Denis Rohan on Aug. 21, 1969. The shrine and a 1,000-year-old pulpit were totally destroyed along with several historical sites. Rohan had joined a U.S.-based group called the Church of God and believed that setting fire to the mosque would hasten the coming of the messiah.

He was later declared mentally unstable and is reported to have died in psychiatric care in 1995.

Foreign Minister Mevlüt Çavuşoğlu addressed a pre-summit meeting where he said OIC countries "are here to say stop to tyranny."

Abbas: US will not be allowed in future peace talks

Ahead of the announcement of the official declaration, Palestinian Authority President Mahmoud Abbas said the U.S. administration will not be included in future peace talks and he accused Trump of playing with Jerusalem.

"Trump wants to give Jerusalem as a present to Israel, as if he is donating one of the U.S. states, as if he is the only person with the authority to decide," Abbas said.

"The U.S. has lost its mediator role in the Israeli-Palestinian peace process, and we will never allow in the future for the U.S. to take part in the process. We want the OIC to support us in this decision."

Abbas also urged participants at the OIC summit to make "very clear and strong decisions" with the aim of protecting the places of worship of both Muslims and Christians.

Abbas said: "To be an internationally recognized state, three things are needed: Government, people and borders. Israel has government, has people, but has no borders."

The United States is seeking to "maximize Zionist interests" and neglecting legitimate Palestinian demands, Iranian President Hassan Rouhani said in his speech at the summit.

"Islamic countries should unanimously emphasize their principled position in opposing the recent U.S. move in talks with partners of the U.S., especially European countries," Rouhani said.

Rohani said the U.S. had never been an honest mediator in the peace process and called on the Islamic world to unite against the "Zionist regime."

"Iran is ready to cooperate without preconditions with all Islamic countries to defend Jerusalem.

Zionist movements should be continuously monitored and the OIC should meet if necessary to take measures at the level of ministers or heads of state," he said.

Jordanian King Abdullah II, who is the formal custodian of Jerusalem's Muslim holy sites, said Trump's recognition of Jerusalem is a "dangerous and destabilizing decision," and that the region "cannot enjoy peace without the two-state solution."