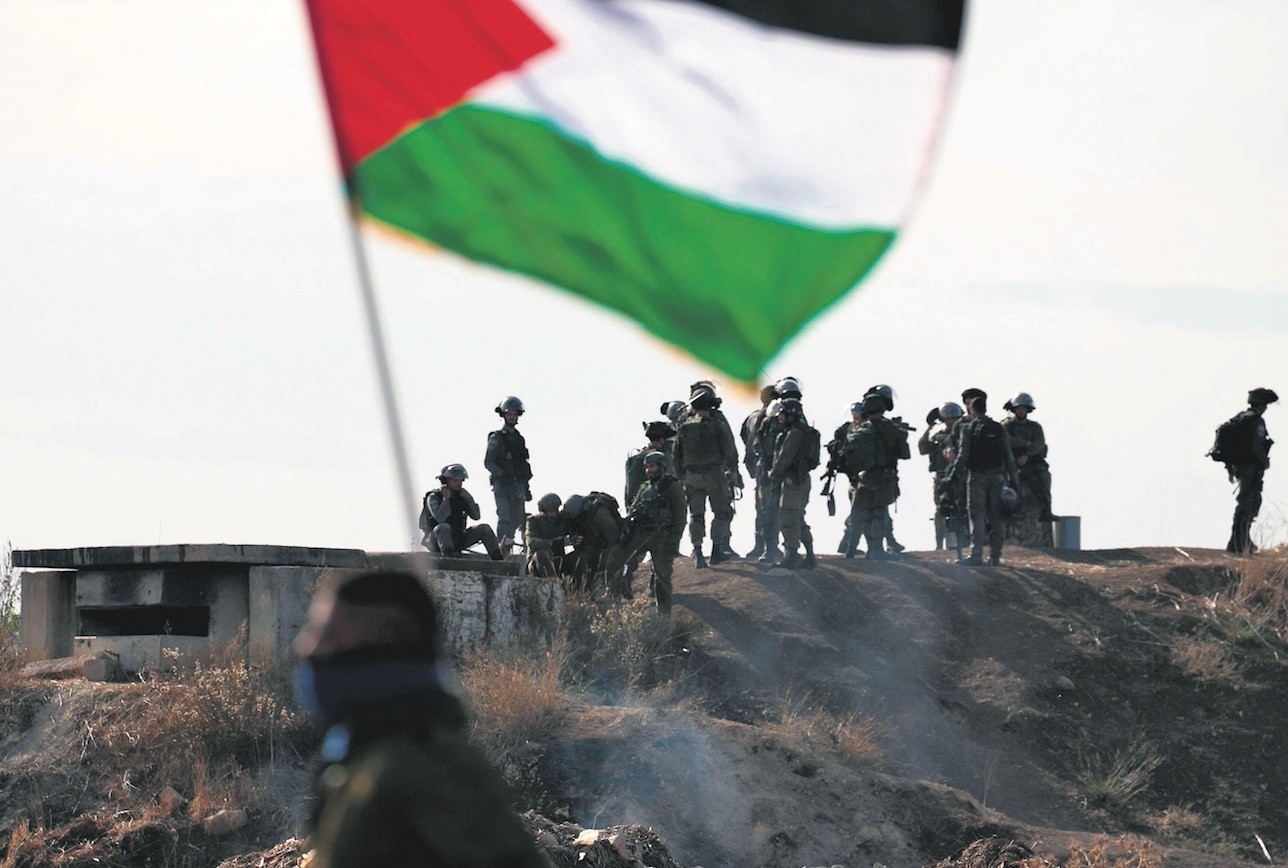 Palestinian protesters clash with Israeli security forces in the West Bank town of Tulkarem, following a demonstration against U.S. President Trump's decision to recognize Jerusalem as the capital of Israel, Dec. 11.
by Daily Sabah with Agencies Dec 15, 2017 12:00 am

Experts say that Washington's unileteral decision to recognize Jerusalem as Israel's capital will undermine U.S. influence in the region and drive Muslim countries to embrace a common stance

The Organization of Islamic Cooperation (OIC) decided to recognize east Jerusalem as the capital city of Palestine in response to U.S. President Donald Trump's recognition of Jerusalem as Israel's capital last week. Experts have said Trump's decision weakens the U.S.'s role in the region, if other global powers follow the OIC. "The U.S. undermines its own hegemony with one-sided and unjust policies, which led Muslim countries to unite and present a common stance," Muhittin Ataman from Ankara Social Sciences University said. Following an extraordinary summit in Istanbul called by President Recep Tayyip Erdoğan on Wednesday, the OIC, declared east Jerusalem the capital of Palestine "under occupation" and urged the U.S. to withdraw from the peace process and back down from its Jerusalem decision, while underlining that the decision has no legal value, as it is considered "null and void."

The international community also expressed strong opposition to the Trump administration, saying the dispute over Jerusalem should be dealt with through U.N. resolutions, as well as negotiations between Palestinians and Israelis, rather than a unilateral step by the White House. Ataman said that countries opposing Trump's decision might attempt to establish diplomatic missions in east Jerusalem, which he said would be opposed by Israel.

In addition to leaders of the Muslim world, Russia, China, the United Kingdom and the EU said the Jerusalem move is a roadblock for the two-state solution and that it would further fuel instability in the region.

Speaking at a news conference in Ankara, Turkey, Russian President Vladimir Putin said on Monday the U.S. move "doesn't help the Mideast settlement and, just the other way round, destabilizes the already difficult situation in the region."

The decision might "finish prospects for the Palestinian-Israeli peace process," Putin said during a joint press conference with Erdoğan. The Russian president added that Moscow believes that the status of Jerusalem can only be settled through talks between Palestinians and Israel in line with UN resolutions.

Jerusalem was first put under international sovereignty and control with the 1947 UN Partition Plan, which recommended the division of historical Palestine into Jewish and Arab states to end the conflict in the region. The UN opted for special status, as Jerusalem is holy to Jews, Christians and Muslims. However, during the 1948 Arab-Israeli War, Israeli forces declared West Jerusalem part of Israel, ignoring the UN recommendation. In the 1967 Six-Day War, Israel again targeted Jerusalem, taking control of the eastern part of the city, which was previously under Jordanian control.

The OIC Istanbul Declaration is a turning point for Palestine and a strategic blow to Trump's Jerusalem decision, head of the Council on American-Islamic Relations (CAIR) said Wednesday.

"Turkish President Erdoğan and the OIC's final declaration in Istanbul, recognizing east Jerusalem as the capital of Palestine is one clear result that has now triggered an international campaign of counter-recognition of Trump's decision," Nihad Awad was quoted as saying by Anadolu Agency (AA) at the Global Policy Institute, a think tank in the U.S. capitol.

China's position on Palestine is slightly different than the Russian stance, as it has been a strong supporter of Palestine.

Beijing supports an independent Palestine on the basis of the 1967 borders with east Jerusalem as its capital, Chinese Foreign Ministry spokesman Lu Kang has said. Speaking after the OIC extraordinary summit, he said Beijing understands the concerns of Muslim countries over the status of Je

Ataman contended that the decision would weaken the hegemony of the U.S. in the global arena "as the other global powers, including Russia and China, might be willing to make use of the common stance of Muslim countries against the U.S."

The leaders of the European Union, U.K. and Canada have also expressed commitment to the two-state solution and that their governments would not follow the White House decision.

Rebuffing the call by Netanyahu to EU leaders to recognize Jerusalem as Israel's capital, Mogherini said: "He can keep his expectations for others because from the European Union member states' side, this move will not come," she said.

Last week, Britain's Prime Minister Theresa May said in a statement that Trump's decision is "unhelpful in terms of prospects for peace in the region."

"We disagree with the U.S. decision to move its embassy to Jerusalem and recognize Jerusalem as the Israeli capital before a final status agreement," she said. "We believe it is unhelpful in terms of prospects for peace in the region. The British Embassy to Israel is based in Tel Aviv, and we have no plans to move it."

Turkey has argued that Trump's decision acts as a reward for Israeli atrocities against Palestinians in the occupied territories. Erdoğan has called Israel a "terrorist state" and an "invader."

Yaşar Hacısalihoğlu from Yeni Yüzyıl University said that he considers the OIC decision "a first step to a new process in the region and a reflection of President Recep Tayyip Erdoğan's political leadership." He added: "Jerusalem is a significant issue that puts the global norms of justice and conscience into question" and also a symbol of the common stance of global conscience.

The OIC was established during a historic summit in Rabat, Morocco, in 1969, following an arson attack on Al-Aqsa Mosque in occupied Jerusalem. The mosque was set on fire by an Australian Christian named Michael Denis Rohan on Aug. 21, 1969. The shrine and a 1,000-year-old pulpit were totally destroyed along with several historical sites. Rohan had joined a U.S.-based group called the Church of God and believed that setting fire to the mosque would hasten the coming of the messiah.

He was later declared mentally unstable and is reported to have died in psychiatric care in 1995.

Palestine is set to receive $10 million in donation from Ankara, according to the government's Official Gazette, a daily printed record of legislation and notices.

The donation is part of an earlier agreement signed between Turkey and the state of Palestine. The funds will be used to support social and economic development projects, meet urgent needs as well as boost institutional capacity.