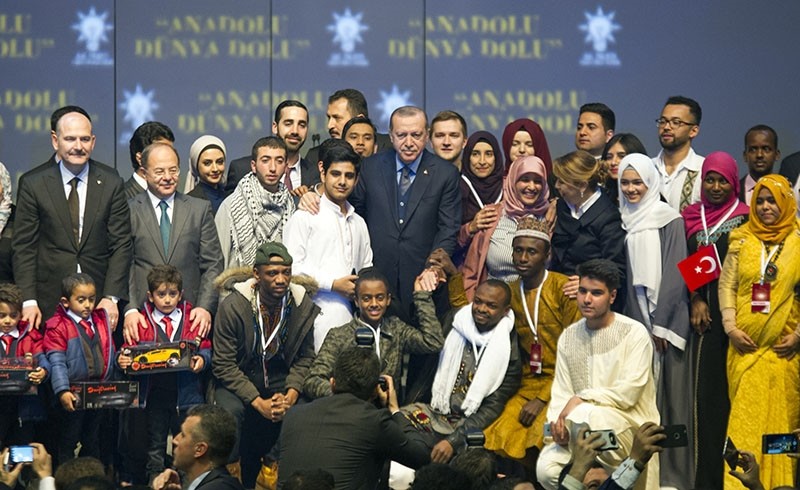 Ankara has spent $30 million in the last seven years for the refugees hosted in the country and Turkey will continue its open-door policy, despite the lack of sufficient support from the international community, particularly European countries, President Recep Tayyip Erdoğan said yesterday in an event organized to mark International Migrants Day in capital Ankara.

"As Turkey, we welcomed our 3.5 million brothers and sisters who fled from Syria and Iraq and came to our country just for the sake of Allah [God]. The total number of Syrian refugees in Europe, however, is 987,000. Germany claims that it spent 16 billion euros for the refugees within its borders in 2016," the president said while adding that Turkey spent $30 billion in total in seven years.

Recalling the promise the EU gave to Turkey last year was 6 billion euros aid, Erdoğan emphasized that the amount Turkey received so far is 900 million euros. "In terms of the U.N., we received 600 million euros. What if we were in need of this aid?" Erdoğan further asked.

In March 2016, Turkey and the EU signed a refugee deal that aimed to discourage irregular migration through the Aegean Sea by implementing stricter measures against human traffickers and improving the conditions of Turkey's 3 million Syrian refugees.

The deal included a 6 billion-euro ($6.8 billion) aid package to help Turkey care for millions of refugees hosted in the country and the EU promised to initially allocate 3 billion euros ($3.5 billion) in its first tranche for projects to support Syrian refugees.

"Today, although Turkey is the country that has the highest number of the refugees in the world, it is also a country where refugees suffer any of the ugly events they had to endure in other countries. Anatolia has been a home for refugees for centuries. When the Jews in Spain could not find a land to go, our predecessors welcomed them. When Polish people could not find any place to go, we showed them a place right behind Istanbul," Erdoğan said, emphasizing the importance of Anatolia as a migration route. He added that today we see the same example in the Syria and Iraq cases.

As EU officials continue to praise Turkey's role in the Turkish-EU refugee deal and stress the bloc's commitment to it, Turkish politicians have criticized the EU for failing to keep its promises.

The agreement also allowed for the acceleration of Turkey's EU membership bid and visa-free travel for Turkish nationals within the Schengen zone that is mostly comprised of EU member states.

"When our brothers from Syria and Iraq got into trouble, they immediately turned their heads to Anatolia, which was a right move for them. In better times, you can find many friends but it is remarkable to also be behind them in bad times," Erdoğan stated.

Turkey, for the third consecutive year, has hosted the largest number of Syrian refugees worldwide, as the number of people displaced from their homes across the world due to war and persecution climbed slightly to a record 65.6 million last year, according to a new U.N. report released recently. Turkey has taken in the largest number of Syrians with a total of 2.9 million at the end of 2015. It has since exceeded 3 million, the United Nations High Commissioner for Refugees said.

This number accounts for around 45 percent of all Syrian refugees in the region, according to the U.N.

"Today, more than 5 million of our citizens live in Europe. As we welcome everyone who comes to our country, we also support our brothers and sisters who go abroad in every respect. The West has an understanding of seeing a person's death as a tragedy while interpreting the death of a million people as a statistic," Erdoğan indicated while adding that a civilization which seizes the money of people who come to their borders is a civilization that does not have any more words to offer to humanity.

"Those who see themselves as developed and modern are unfortunately as disgraced, as we, Turkey, giving credit to our stance on migrants," he further expressed.

"Today, it is stated that 700,000 migrants are trapped in Libya, which leads to the emergence of slave markets where people can be bought and sold for TL 1,000 (approximately $260). If people are forced to work for an endless time and without any limits, this is called modern slavery," the president said.

Syria's six-year civil war remains the largest single cause of displacement, with 12 million people — around two-thirds of the population — either uprooted within the country or fleeing abroad, the group said. They were followed by some 7.7 million Colombians, 4.7 million Afghans, 4.2 million Iraqis and 3.3 million South Sudanese.

The UNHCR's new Global Trends report on displacement said at the end of last year, 300,000 people more than the preceding year had been displaced. Out of the 65.6 million worldwide total, 22.5 million are refugees, 40.3 million are internally displaced and 2.8 million are asylum seekers.