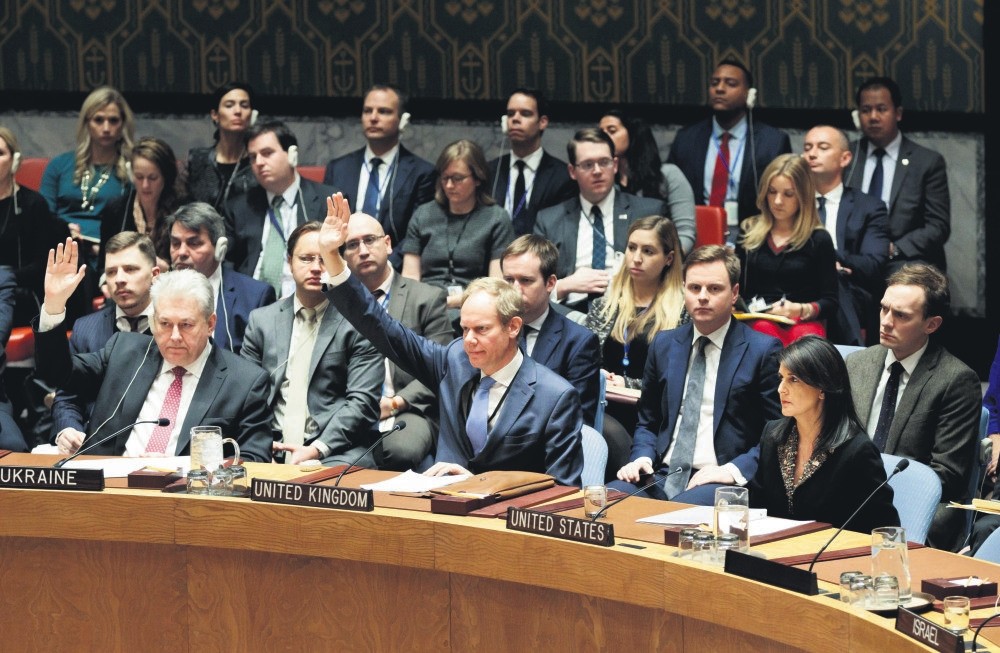 Nikki Haley (Front-R), the U.S. ambassador to the United Nations, was the only one to veto the U.N. Security Council resolution about Presiden Trumph's Jerusalem desicion, New York, Dec.18.
by Daily Sabah with Agencies Dec 20, 2017 12:00 am

As the only country to veto the U.N. Security Council resolution on Jerusalem, the international community criticized the U.S. for losing its objectivity on the issue

On Monday, the U.S. stood as the only country to veto the U.N. Security Council resolution that rejected the establishment of diplomatic facilities in the contested city of Jerusalem. The international community united strongly and opposed Washington's decision to recognize the historic city as Israel's capital, leaving the super power alone in the international arena. Fourteen council members voted in favor of the drafted resolution, presented by Egypt that would have demanded U.S. President Donald Trump to reverse course on the decision. The U.S.'s ambassador to the U.N., Nikki Haley, called the Security Council resolution "an insult" that won't be forgotten, saying the U.N. forced the U.S. to cast a veto simply because of its right to decide where to put its embassy.

The vetoed resolution would have demanded that all countries comply with the 10 resolutions on Jerusalem, dating back to 1967, including requirements that the city's final status be decided in direct negotiations between Israel and Palestine. It would also have affirmed that "any decisions and actions which purport to have altered the character, status or demographic composition of the holy city of Jerusalem have no legal effect, are null and void and must be rescinded." Haley told the council "the United States has never been more committed to peace in the Middle East," and called accusations that the U.S. is setting back the prospect for peace "scandalous."

The veto by the U.S. Ambassador Haley against other members of the Security Council received immediate reaction from the international community, which said the U.S. has lost its impartiality in the peace process between the Palestinians and the Israelis.

Turkey was among the first to condemn the veto move, saying despite the U.S., the whole world has acted in unity over Jerusalem.

Speaking at a symposium in Ankara, presidential spokesman İbrahim Kalın pointed out the issue yesterday, saying although Trump's decision to recognize Jerusalem as Israel's decision and move the U.S. embassy from Tel Aviv was essentially wrong, bad and unlawful, in the end good came out of it since it helped the world remember the Palestinian question.

"I'd like to draw your attention that the voting is very important. The Security Council meeting to declare the U.S.'s decision unlawful by the U.N. was rejected 14 to one. This decision was rejected by the veto of the U.S. This alone is a very important indicator itself as America has become lonely here. The whole world has acted in unity over Jerusalem. Therefore, yesterday's voting is very important for showing a global alliance, and a consensus has formed on the issue of Jerusalem," Kalın said.

He underlined that the countries that took part in the voting declared that they will not move their embassies in Israel to Jerusalem.

Kalın also noted that Monday's vote was once again a de facto confirmation that Trump's decision was null, and it is very questionable that the U.S. administration has not noticed its mistake and has not backed down despite all warnings.

"The U.N. General Assembly will convene Thursday and vote on this issue. In the case of a two-thirds majority, and we think with great probability that this majority will be found, it will be confirmed in the U.N. that the Jerusalem decision by the Trump administration is unlawful," he added, noting that this will be a major milestone and a turning point in the Palestinian issue.

"The United States' veto of a United Nations Security Council resolution calling for the U.S. to rescind its declaration of Jerusalem as Israel's capital showed once again that Washington has lost objectivity," the statement said.

Meanwhile, President Recep Tayyip Erdoğan and British Prime Minister Theresa May also held a phone conversation following the veto as both the leaders agreed that new tensions that will put the peace process in danger should be avoided.

On Dec. 6, President Trump announced his decision to recognize Jerusalem as Israel's capital and relocate the U.S. Embassy from Tel Aviv to the holy city.

Iran condemned the White House decision yesterday, calling "provocative and unwise." Iran's Foreign Ministry spokesman Bahram Ghasemi said the U.S. administration "showed its lack of compliance with international resolutions by its provocative and unwise decision to recognize Al-Quds as the capital of the Zionist occupying regime."

He said Washington's veto, despite the rest of the council supporting the resolution, "proved that it seeks a compromise by trampling on the legal rights of all Palestinians."

British Ambassador Matthew Rycroft said, "The status of Jerusalem should be determined through a negotiated settlement between the Israelis and the Palestinians, and should ultimately be the shared capital of the Israeli and Palestinian states."

With the Palestinians rejecting U.S. mediation, Russia said it was ready to take over.

Russia's Deputy U.N. Ambassador Vladimir Safronkov said the issue of "moving as quickly as possible toward direct Israeli-Palestinian negotiations" is becoming more important, and he reiterated Russia's proposal to hold a summit between the Palestinian and Israeli leaders.

"We are ready to become an honest mediator here," he said.

The resolution that was vetoed would have called on "all states to refrain from the establishment of diplomatic missions in the holy city of Jerusalem," citing a 1980 council resolution.

The vetoed resolution would also have reiterated a call to reverse "the negative trends on the ground that are imperiling the two-state solution" that would see the states of Israel and Palestine living side by side in peace, and it would have called for intensified and accelerated international and regional efforts to achieve Middle East peace.

Egyptian Foreign Ministry spokesperson Ahmed Abu Zeid expressed his regret in a written statement, saying Egypt is saddened by the veto of this important decision which heeds the conscience of the international community and openly rejects the U.S. recognition of Jerusalem as the capital of Israel.

Abu Zeid noted that the Arab group in the U.N. will gather to assess the situation and discuss the steps to be taken for the protection of Jerusalem's status.

Palestine's presidential spokesperson Nabil Abu Rudeina also condemned the U.S. veto, calling it a mockery of the international community and a concession to Israeli occupation and aggression, according to Palestine's official news agency WAFA.

Abu Rudeina stressed that this veto would lead to further isolation of the U.S. and is a provocation of the international community.

"This counterstance against unilateral steps on Jerusalem's recognition as the capital of Israel shows that we are not alone, and our actual concern should be the free world," Merzuk Ali El Ganim, Kuwait's parliament speaker, said in a written statement.

Ali Karadaghi, secretary-general of the International Union of Muslim Scholars (IUMS) headquartered in Qatar, on the other hand, described the decision on his Twitter account as "terror and a challenge for all countries."

On the other end of the spectrum, the U.S. has only received support from Israel. Israeli Prime Minister Benjamin Netanyahu praised U.S. Ambassador Haley after the veto.

Following the Trump's latest move, U.S. Vice President Mike Pence postponed his trip to the Middle East for the second time since the announcement was made. The trip to Egypt and Israel, due to begin yesterday, has been pushed back to mid-January.

Pence's visit was set to have a rocky start as aides to Palestinian Authority President Mahmoud Abbas said the president would not meet with Pence over Trump's call.

Abbas had originally planned to host Pence, a devout Christian, in the biblical West Bank town of Bethlehem.

White House officials also said Pence had no plans to visit the contested city's Church of the Holy Sepulcher – the site where Christians believe Jesus was crucified and resurrected.

No welcoming party was expected for the vice president in Egypt either as leading Muslim and Christian clerics in the Arab country refused to meet with him during his trip.