Jerusalem vote reflects what Muslims can do when united, Erdoğan says 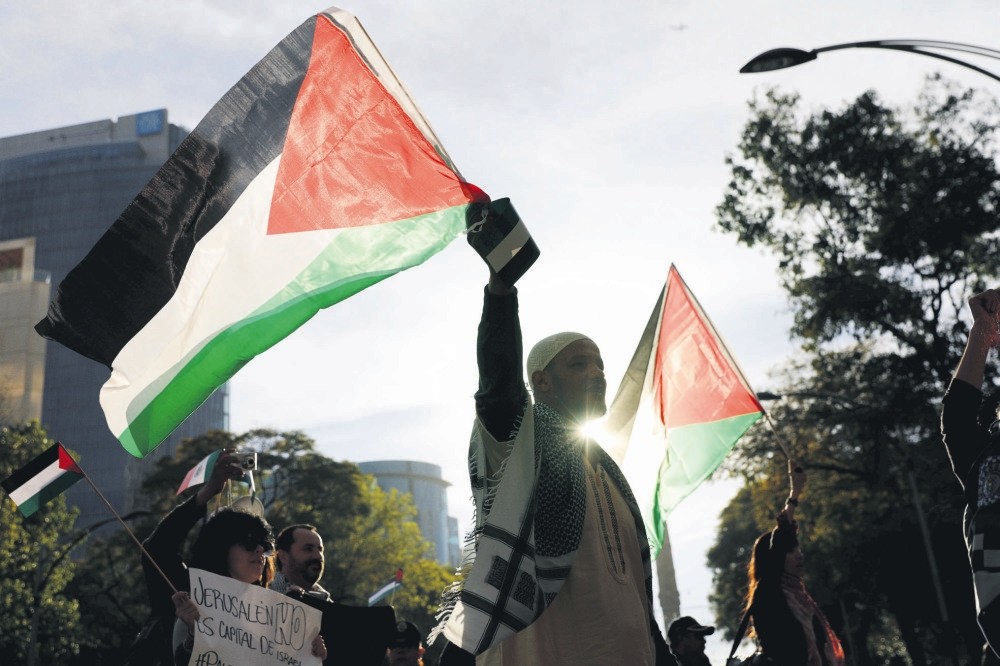 The approval of the Jerusalem vote at the United Nations General Assembly has shown what the Muslim world can do in unity, President Recep Tayyip Erdoğan said on Sunday during his address at the Sudanese parliament in a special session held to welcome him. "With the emergency summit on Jerusalem, which had resulted in success, it has been proved how strong the Muslim world can be when they act together," the president said. Last Thursday, the UNGA had convened in an emergency session after Turkey and Yemen proposed a draft Jerusalem resolution against U.S. President Donald Trump's decision on Dec. 6 to recognize the historic city as Israel's capital.

The resolution was passed by 128 votes in favor, nine against and 35 abstentions. Prior to the vote, the resolution was voted on in the U.N. Security Council but did not pass when the U.S. used its veto power.

"No one should expect us to remain silent about the killings of Rohingya Muslims, the oppression Palestinians have faced for years, the humanitarian crises in Syria, Iraq, Libya, Yemen and Somalia, as well as the problems in the coastal countries and the Chad Lake basin," he said.

The president said the U.S. administration has made a controversial decision at the expense of pushing the whole region into further crisis and without consulting the move with Turkey, as the term president of the Organisation of Islamic Cooperation (OIC), or the Pope, as the city is holy to Christians, as well.

The U.N.'s history regarding Palestine dates back to 1947, a year before Israel was founded. Since then, the U.N. has released nearly 100 resolutions in relation to Palestine and its conflict with Israel, the first one recommending the partition plan in 1947 with Resolution 181. The U.N. opted for a special status, as Jerusalem is holy to Jews, Christians and Muslims.

The Trump administration called on the states to vote against the decision at the U.N. General Assembly, even making threats of cutting financial aid, President Erdoğan said, adding that this had not turned out the way Washington wanted.

In his speech, Erdoğan thanked Sudanese President Omar al-Bashir for supporting the Jerusalem resolution and joining the emergency OIC summit in Istanbul on Dec. 13. The OIC declared Trump's decision "null and void."

In an exclusive interview with the Turkish language daily, Hürriyet, Kalın said Trump's decision had two dimensions: One was a domestic election promise, and the other was a grave miscalculation of the world's reaction.

"Several conflicts in the Islamic world, the dispute between Iran and Saudi Arabia, sectarian tensions, ongoing civil wars and terror might have had led them [Washington] to expect that no strong unity or solidarity would come from the Islamic countries," Kalın said.

"But Jerusalem united us all. It united Turkish politics, too, four political parties in [Turkey's] Parliament. It also united conflicting countries like Iran and Saudi Arabia. From Europe to Africa, for the Vatican to Christians in the Middle East, a consensus was formed.

"The main problem in the Palestinian question is Israeli occupation. The country itself and its supporters insistently resort to various tactics and strategies to make the world forget about the occupation," he said.

"Discriminating against Arabs and demonizing Palestinians was part of this policy, through which Israel legitimizes its violence in the eyes of the West claiming it faces an irrational, authoritarian, terrorist, anti-liberty and anti-women, patriarchal, emotional mass. This approach is poisoning the relations between Islam and the West, as well as between Muslims and Jews," Kalın said.