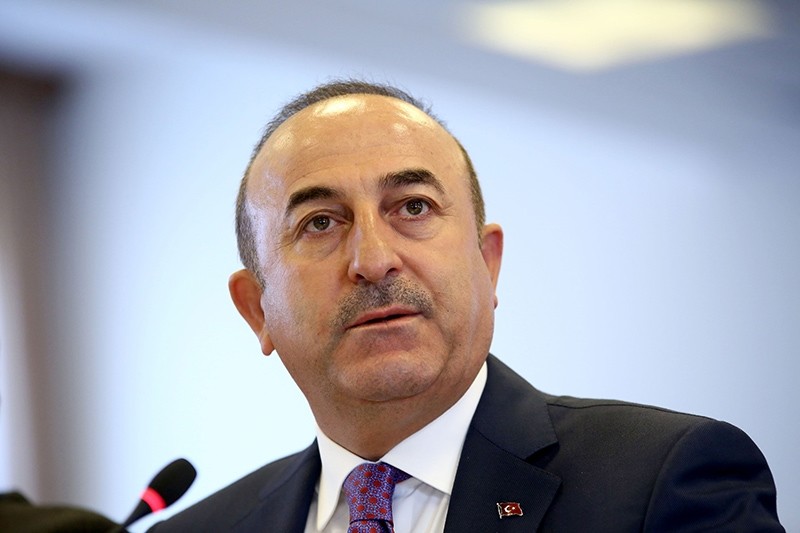 The worst of the crisis between Turkey and Germany is over and Ankara hopes 2018 will see a marked improvement, Foreign Minister Mevlüt Çavuşoğlu told German Press Agency (DPA) in an interview published Monday.

Ties between Ankara and Berlin have been strained since the foiled coup attempt in Turkey last year, as Turkish leaders slammed Germany for not showing strong solidarity with the government. Turkish politicians also accused Germany of ignoring activities of outlawed groups and terrorist groups hostile to Turkey. German politicians, on the other hand, stepped up their criticisms of Ankara, especially before their general elections in September, over the arrest of around a dozen German citizens, including a reporter, a translator and a human rights activist, on suspicions of aiding and abetting terrorist groups.

However, over the last weeks, there has been a certain thaw.

In an extended interview with DPA, Turkish Foreign Minister Mevlüt Çavuşoğlu explains why he is hopeful for a better 2018.

DPA: Sir, since your party, the Justice and Development Party (AK Party), came to power 15 years ago, the relationship between Turkey and Germany has never been as bad as it has in 2017. What do you expect for 2018?

M.Ç.: The first three quarters of 2017 were not very good, but we have made some progress since then. We have a good dialogue, particularly with [German] Foreign Minister [Sigmar] Gabriel. I think both sides are ready to normalize relations. So I am expecting a much better year in 2018.

DPA: So the worst part of the crisis is over?

DPA: One reason is the imprisonment of Germans in Turkey, which even led to the German government toughening the travel advisory for Turkey. Since the end of October, Turkish courts have in some cases released Germans from prison or lifted their ban to leave the country. Was that a coincidence or part of a government strategy to soften the tensions?

M.Ç.: As the government we can only ask the judiciary to speed up the process. In the end, the independent judiciary makes the decision. Look, there are more than 2,000 Turks in prison in Germany. Has Turkey created any problem in our relations because of that?

DPA: The German government says that it wants the Germans released because they were imprisoned because of political reasons.

M.Ç.: We told the German government that that's not true. Why should we put these people in prison? To get something from Germany? No.

M.Ç.: That was wrong, populist terminology on the eve of an election. I am sure he understood he made a mistake.

M.Ç.: He is a good friend of mine, a personal friend, but we don't have to agree on everything.

DPA: The biggest disagreement is the case of Welt correspondent Deniz Yücel who has been in pre-trial detention for more than ten months because of terror allegations. Why is there still no indictment?

M.Ç.: I am also not very happy that the indictment is still not there. But we can only encourage the judiciary to speed up the process. We have done that already. But they are telling us that it's a very complex situation and that the investigation is still ongoing. Therefore it is taking some time. But this is nothing personal. The accusations against Deniz Yücel are very serious. He has not been accredited to Turkey as a journalist since 2015. So he was not arrested for journalism because he was not accredited anyway. But whoever is imprisoned or whoever has problems in Turkey, he or she becomes a hero in Germany. Why? Is Germany the biggest human rights defender in the world? No. I can give you thousands of examples of human rights violations in Germany.

DPA: If the European Court of Human Rights (ECtHR) in Strasbourg rules that Deniz Yücel should be released from pre-trial detention, would Turkey implement this decision?

M.Ç.: It is up to the judiciary, of course, but we have always been executing the rulings of the Strasbourg court.

DPA: So you expect that also in this case the Strasbourg court's decision will be implemented?

DPA: President Erdoğan and you repeatedly criticized racism and anti-Turkish sentiments in Germany, your ministry even issued a travel warning ...

M.Ç.: ... after a travel warning from Germany for Turkey! The racist party [the right-wing populist Alternative for Germany, or AfD] won 13 per cent of the vote. Racism, discrimination and intolerance are rising in Germany. You saw that in the last elections.

DPA: Do you still stand by your travel warning? Are you still saying Germany is dangerous for Turks?

M.Ç.: This is a tricky question. You cannot punish Turkey through travel warnings. I had to reciprocate this travel warning. Not because I like it, but because it was the expectation from my citizens. Germany should understand this: If Germany moves one step towards us, Turkey will move two steps towards Germany. Not because we are afraid of Germany. This is not a weakness, this is coming from the heart. But if Germany threatens Turkey, Turkey will fire back.

DPA: What steps do you expect from Germany?

M.Ç.: Germany shouldn't be a safe haven for supporters of [Gülenist Terror Group] FETÖ and PKK [terror organization]. Look at what happened at the last demonstration. German police tried to stop PKK supporters and they brutally attacked the police. If the police tries to stop them a couple of more times, you will see what they will do in Germany as well. This is a terrorist organization. This is a snake. You cannot sleep with the snake in the same room. Today or tomorrow it will bite you.

We need to respect each other. And we expect from Germany to see Turkey as an equal partner.

DPA: How do you assess Germany's approach towards the Gülen movement, which your government holds responsible for the coup attempt in July 2016? In March, the head of the German secret service BND, Bruno Kahl, said in a Spiegel interview that "The Gülen movement is a civilian association for religious and secular education."

M.Ç.: This is Gülen propaganda. This is really nonsense and unacceptable. This institution knows that FETÖ is actually responsible for the failed coup. They have the evidence.

DPA: In spring you compared the ban on public campaigning for Turkish government officials in Germany and other EU countries with "Nazi methods." Do you regret those comparisons?

Our aim was not to intervene in the internal politics of any other country. We have citizens living in these countries. And we were campaigning for the most critical referendum in the history of the republic. Some European countries including Germany took a side in our referendum. They stopped us, but they encouraged the politicians campaigning for a "no." This is not acceptable in any democratic society.

DPA: The German government issued a regulation in June which says public appearances by foreign government representatives from non-EU states need prior approval and which bans election campaigning by such representatives. Will President Erdoğan still be addressing his citizens in Germany like he did in the past?

M.Ç.: I don't know. You will have to ask the president. But this is very undemocratic.

DPA: When is your next trip to Germany?

M.Ç.: I am going to visit Gabriel in January in his hometown in Goslar. He invited me. We are still working on a date, but it will be soon.

M.Ç.: We started negotiations for the full membership. If the EU decides not to accept Turkey, that's up to the EU. But I see that many countries are still in favor of Turkey's EU membership. There are only a few countries like Germany, Austria and lately Denmark that are against our membership.

DPA: When Gabriel was advocating for a continuation of EU membership talks in April he warned Europe could have no interest in Turkey being pushed towards Russia. Is an alliance with Russia or possibly other countries an alternative to the EU for Turkey?

DPA: The head of the EU commission, Jean-Claude Juncker, said in September that he sees no membership perspective in the foreseeable future because Turkey is moving away from the rule of law. The opposition in Turkey is warning of a dictatorship. Is democracy in Turkey in danger?

M.Ç.: Not at all. Democracy is so important for the Turkish people. In the last 15 years we have made tremendous achievements and progress. Are we 100-per-cent ok? No. The failed coup and our fight against this FETÖ organization have damaged the image of Turkey. Yes, we have the state of emergency that we had to bring in after the coup. But it is targeting only terror organizations, it is not limiting the rights or freedoms of individuals. You cannot call Turkey a dictatorship because of the state of emergency. Turkey holds democratic and fair elections, better than many other European countries.

We are passing through the most difficult years of our republic. We had to take some measures to eliminate this threat. When things are normal, we will get rid of the state of emergency. Of course we will go back to reforms.

When Juncker sees President Erdoğan he calls him his best friend. When we meet everything is nice. I would like to ask at what time of the day he made this statement and for what reason. Juncker is also my personal friend but he changes his opinion even within the same day.