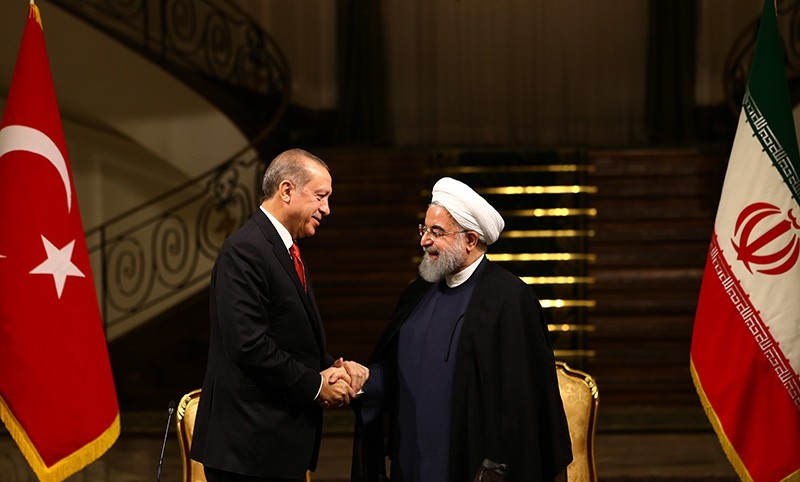 President Recep Tayyip Erdoğan discussed the ongoing protests in Iran with his Iranian counterpart Hassan Rouhani in a phone conversation Wednesday where he stressed the importance of stability and calm in Iran for Turkey.

According to presidential sources, Erdoğan told Rouhani that he backs the Iranian president's statement warning Iranians not to violate laws while exercising their right to protest. Rouhani thanked President Erdoğan in return, expressing hope that the protests will end in a couple of days.

Meanwhile, Foreign Minister Mevlüt Çavuşoğlu hit back at U.S. President Donald Trump and Israeli Prime Minister Benjamin Netanyahu's comments about the unrest in Iran on Wednesday, saying they should stay out of a country's domestic matters and let Iran solve the issue peacefully.

The minister said he was against any foreign intervention as it was a domestic matter, and Turkey hoped that stability and peace would soon be restored in Iran. His comments come after Trump and Netanyahu openly voiced support for the protests, and the U.S. leader called for a U.N. Security Council session on the matter.

Çavuşoğlu said Trump had made the call solely because of his anti-Iran stance, and the matter had no international dimension and hence Trump's move would yield no result.

The Turkish foreign minister also underlined that the current administration in Iran was chosen by the public through elections, and asserted that countries should refrain from making "double standard" comments when criticizing Tehran.

"It's clear as day who wants to stir up trouble in Iran. If there is to be a change, then it should be via elections," he said, adding that President Hassan Rouhani's statement about peaceful protests was very important within this context.

In addition, government spokesperson Deputy Prime Minister Bekir Bozdağ said in a tweet, "Turkey is against any move to come to power through unconstitutional and unlawful ways or by using force or external interventions."

Bozdağ called on the Iranian government and the people to be cautious against provocations and to secure peace.

Adding that Turkey is monitoring events in its neighboring country closely, he said, "Peace and stability in Iran is important for the Iranian people and our region."

He also said that any chaos or conflict in Iran will lead to unrest in the region.

The protests that began against poverty on Dec. 28 quickly escalated into anti-government nationwide riots, in which at least 20 protesters and one police officer were killed.

Thousands of government supporters also took to the streets to hold mass rallies with the aim to protest the violence that has taken place in anti-government rallies since Dec. 28.