FM Çavuşoğlu: US, Russia in a race to use YPG terrorists 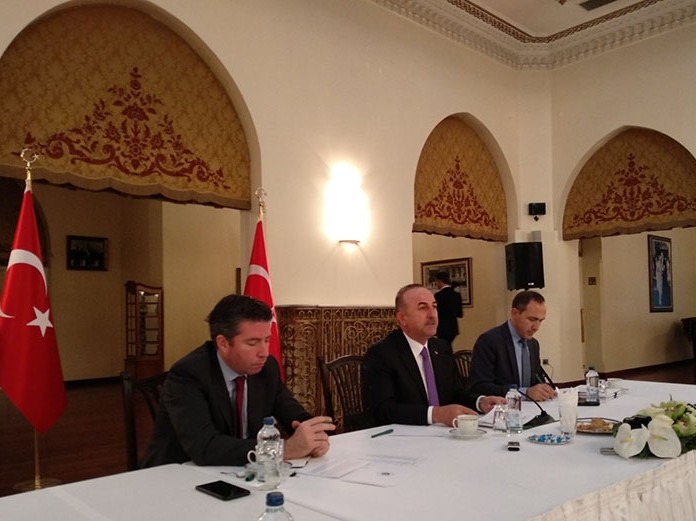 Foreign Minister Mevlüt Çavuşoğlu said yesterday that both Russia and the United States are in a race to use the People's Protection Units (YPG), the PKK terrorist organization's Syrian affiliate Democratic Union Party's (PYD) militia. He added, however, that Russia is closer to Turkey's position on the YPG unlike NATO ally the U.S.

Çavuşoğlu met with reporters in Ankara to explain Turkey's foreign policy outlook for 2018. The foreign minister said that Russia and the United States both support the YPG despite Ankara's opposition on the issue.

"Russia at least understands our sensitivity. We could not explain this sensitivity to our ally U.S." Citing U.S. President Donald Trump's promise that the YPG would not be given arms support any more, Çavuşoğlu said that no further concrete steps have been taken in this regard.

Çavuşoğlu stressed that Turkey is against the PYD's participation at the Sochi summit. Underlining that Russia is on board regarding refusing PDY participation, he said: "There are some confusing statements on this issue, but we made this decision together as three countries. Also, it would have negative impacts on the representation of the opposition there. There cannot be a solution where terrorist organizations are at the table."

Despite Russia assuring Turkey that PKK-affiliated groups are barred from attendance at the Sochi summit, a YPG commander said in late December that Moscow promised to invite 155 representatives from the YPG-controlled region in northern Syria.

Touching on the relations with the United States in 2017, Çavuşoğlu said that ties are moving in the wrong direction. Stressing that the U.S. remains a NATO ally for Turkey despite everything, Çavuşoğlu said that it is on Washington to keep ties on the right track. "If they do us wrong, we do not swallow it, we show the necessary reaction."

In the thorny issue of the U.S's arms support to the YPG, Ankara's argument is that the trucks of arms provided to the YPG would be eventually transferred to the PKK, which is listed as a terrorist organization by Turkey, the EU and U.S., and would pose great security threats to Turkey.

Emphasizing that the YPG controls a quarter of Syria, Çavuşoğlu contended that not a single Kurd can return to this area. The foreign minister said that the threat to the future of the Syrian people is tremendous. "Following Operation Euphrates Shield, 100,000 Syrian Arabs have returned [from Turkey to Syria]. But although the PYD controls one-fourth of Syria, 300,000 Kurds in Turkey could not return because the PYD even discriminates against Kurds," Çavuşoğlu said.

Commenting on a possible solution in Syria, Çavuşoğlu said that the Astana talks and Sochi summit would not be enough in themselves. He argued that the U.S., European states and other regional countries should also partake in the process. Underlining that more concrete steps have been taken for the resolution of the conflict in 2017, Çavuşoğlu said that Turkey's efforts to create de-escalation zones have paid off. He said that without a political resolution, the progress that has been made would be in vain. "We will pay more attention to the political resolution in 2018. We aim to reinvigorate the Geneva process with both Astana and Sochi in order to reach a sustainable resolution. How many summits have been held so far, how many resolutions have been reached? None, except the final declaration announced in the first Geneva summit. We are planning to yield results by integrating Astana, Geneva and Sochi. Transparent elections with the participation of everyone [is needed], then a truly political solution would be reached. We will continue the fight against Daesh and other terrorist groups. We have already started to hold talks with actors that could provide support in this line," Çavuşoğlu said.

Stressing that Turkey does not ignore the humanitarian aspect of the Syrian civil war, Çavuşoğlu said that Turkey has been playing a significant role in delivering aid across the border with the cooperation of international organizations. "We have started negotiations with all actors, particularly with the EU, which might provide support for the rebuilding of Syria following a political solution. We will make plans now so that we can rebuild Syria when there is a political solution," Çavuşoğlu said.

"The fight against terrorist groups continues," Çavuşoğlu said, adding that there is no difference between the YPG and Daesh and al-Nusra Front. "Everyone should struggle against the YPG," he said, if it poses a threat to the territorial integrity of Syria. Çavuşoğlu said Turkey will take action when there is a threat from Syria. Upon a question about a possible operation into Afrin, Çavuşoğlu said that it could be launched "suddenly."