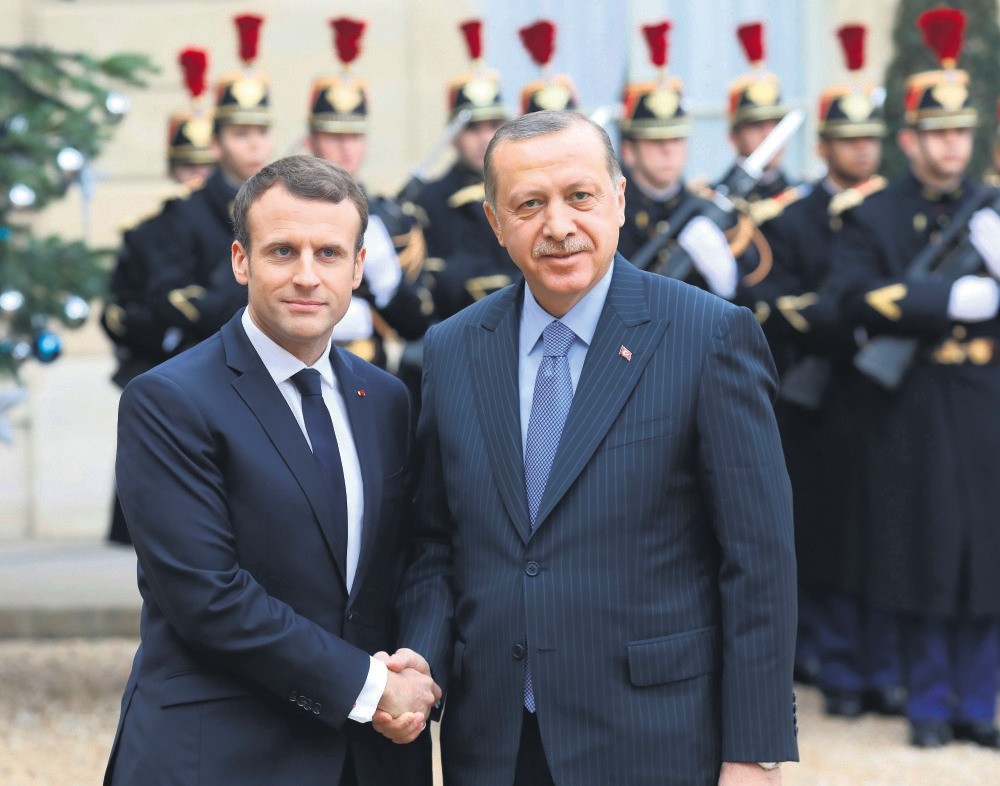 President Recep Tayyip Erdou011fan is welcomed by French counterpart Emmanuel Macron upon his arrival for their meeting and luncheon at the Elysee Palace, Paris, Jan. 5.
by Daily Sabah Jan 06, 2018 12:00 am

Relations with Europe are swiftly healing as Turkish authorities pay visits to critical EU states, including France and Germany

Turkish politicians are intensifying their positive remarks and willingness for a fresh start in the country's ties with the European Union in the new year with a recent visit by President Recep Tayyip Erdoğan to France, and Foreign Minister Mevlüt Çavuşoğlu's expected visit to Germany, two of the most significant players in the 28-member bloc.

President Recep Tayyip Erdoğan was in Paris on Friday to meet with French President Emmanuel Macron, which is seen as an important step toward normalizing relations with the EU.

Ahead of his visit, Erdoğan told French broadcaster LCI on Thursday, that Turkey and France will "take important steps" on economy and politics.

"I will make my first visit to Europe [for 2018] to [meet] my friend Emmanuel Macron," Erdoğan said, adding that France and Turkey have many important steps to take politically, strategically and economically.

Regarding his relationship with Macron, Erdoğan said they had "a good start."

He also said that he also had excellent contacts with former French presidents, including Jacques Chirac and Nicolas Sarkozy, during his 15 years in power.

"The steps we took up to now with Mr. Macron are all in the right direction, and I have a lot of hope in Mr. Macron, especially since we have trilateral cooperation between Turkey, France and Italy in the field of defense," he added.

Last week, Erdoğan said Ankara has no problem with Europe. He said there might be official visits to EU member states ahead as there have been positive signals and easing of strained relations between Ankara and EU countries. Erdoğan added that Turkey wants to have good relations with the EU and its member states.

Relations between Ankara and its EU allies have been strained, particularly since the July 15 coup attempt last year. Ankara says there has been a lack of support against the Gülenist Terror Group (FETÖ) and its members, many of who have sought asylum in Europe. In addition, the free movement of PKK sympathizers has also led Ankara to lose trust in its European allies. The PKK is recognized as a terrorist group, but its supporters are able to hold rallies in European cities freely, as well as conduct recruitment activities and collect financial support.

On Friday, he called for a fresh start in Ankara's rocky relationship with Berlin, holding out the prospect of closer economic cooperation, particularly in transport and energy, if ties improve. In a column written for the Funke media group of newspapers for publication on Friday ahead of a meeting with Gabriel, Çavuşoğlu called for an end to the "current crisis spiral in our relationship.""Both sides have an interest in a new start in the bilateral relationship as we live in a time full of challenges," he wrote. "It is not the time for bullhorn diplomacy."

Çavuşoğlu said Germany needs to develop a more empathetic tone in its dealings with Turkey. "Berlin did not seem to fully understand the trauma caused by the failed coup against President Erdoğan in 2016," he said.

Speaking at a press conference on Tuesday, Çavuşoğlu said that if the EU starts to act more respectfully toward Turkey, relations would be healthier. "It is not possible to come up with a solution with countries like Turkey otherwise. The Turkish public deserves this. From now on, this patronizing period has come to an end," he said, adding that the EU eventually started to understand this and should revise itself.

Ankara has criticized Berlin for not handing over asylum seekers it accuses of involvement in the failed coup while Berlin has been critical the jailing of German citizens in Turkey.

Çavuşoğlu said an improved relationship could mean that the two countries could work more closely in areas, including security and trade.

He stressed the importance of Turkey's role in stemming the wave of migrants to Germany under the migrant deal with the European Union and said he hoped that the EU would live up to its commitments to make it easier for Turks to get visas in return.

Turkey and the EU signed a refugee deal in March 2016 to discourage irregular migration across the Aegean Sea by taking stricter measures against human traffickers and improving the conditions of the nearly 3 million refugees in Turkey.

The deal employs a one-for-one formula under which failed asylum seekers in Europe are returned to Turkey, while Syrian refugees are resettled in EU states in a quota system.

Gabriel also said the EU should seek new ways of dealing with Turkey. According to Gabriel, the EU needs to find alternative ways of creating closer cooperation and partnerships with both Turkey and Ukraine as both countries are unlikely to join the 28-member bloc in the foreseeable future. The German foreign minister presumed that such a model could lead to a "new, closer form of customs union" between Turkey and the EU.

Gabriel also said that there were "clear signals of alleviation [of tensions]" and that steps "in the right direction" are being taken after the release of German nationals who were arrested in Turkey amid recent counterterrorism investigations. "We are making progress, step by step," he said.