Disagreements can be overcome with dialogue, FM Çavuşoğlu says after meeting with German counterpart 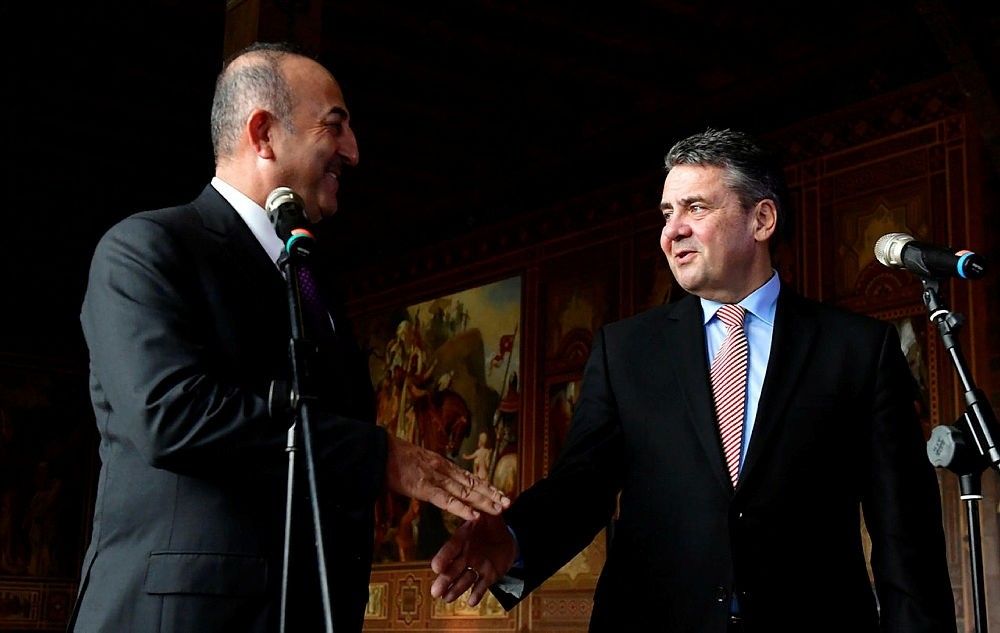 German Foreign Minister Sigmar Gabriel, right, and his Turkish counterpart Mevlu00fct u00c7avuu015fou011flu shake hands after giving a statement during their meeting at the Kaiserpfalz Imperial Palace in Goslar, Germany, Jan. 6, 2018. (AFP Photo)
by Daily Sabah with Wires Jan 06, 2018 12:00 am

Foreign Minister Mevlüt Çavuşoğlu said on Saturday he had agreed with German counterpart Sigmar Gabriel that "difficulties and disagreement" with Germany needed to be solved through dialogue and cooperation.

"We believe that we can develop our relations in mutual understanding, dialogue and sincere cooperation. In the future, we need to start operating various mechanisms between the two countries. There are consultation mechanisms between the two foreign ministries. We need to take steps to build confidence to improve our economic relations, we have to continue to take concrete steps," Çavuşoğlu said during a joint new conference with Gabriel, adding that the two countries did not have to agree on every topic.

Speaking about Turkey's bid for EU membership, Çavuşoğlu said the there was a disagreement regarding the country's accession to the bloc. He also stressed that topics such as the Customs Union between Turkey and EU should be overcome as it was beneficial to both sides.

Meanwhile, Gabriel said he agreed with Çavuşoğlu to do everything possible to improve the ties between Berlin and Ankara that have soured in a series of disputes.

Ahead of the visit, Turkey's top diplomat has expressed hope for better relations with Germany in the new year ahead of a meeting with his German counterpart Sigmar Gabriel on Saturday.

The two were set to hold talks in the central German city of Goslar, Gabriel's home town, in an effort to steer relations between the two nations "on a better course," according to the German Foreign Ministry.

The top diplomats plan to discuss difficult topics, such as Turkish-German journalist Deniz Yücel, who was detained on charges of being involved in terrorist activities in Turkey.

Çavuşoğlu also called on Friday for a fresh start in relationship with Germany, holding out the prospect of closer economic cooperation if ties improved.

"Both sides have an interest in a new start in the bilateral relationship as we live in a time full of challenges," Çavuşoğlu wrote in a column for Germany's Funke media group of newspapers. "It is not the time for bullhorn diplomacy."

The two ministers are also set to visit the Imperial Palace of Goslar and take a stroll through the inner city.

Ties between Ankara and Berlin have been strained since the defeated coup in Turkey last year as Turkish politicians criticize their German counterparts for failing to show strong solidarity with Ankara against the attempted military takeover.