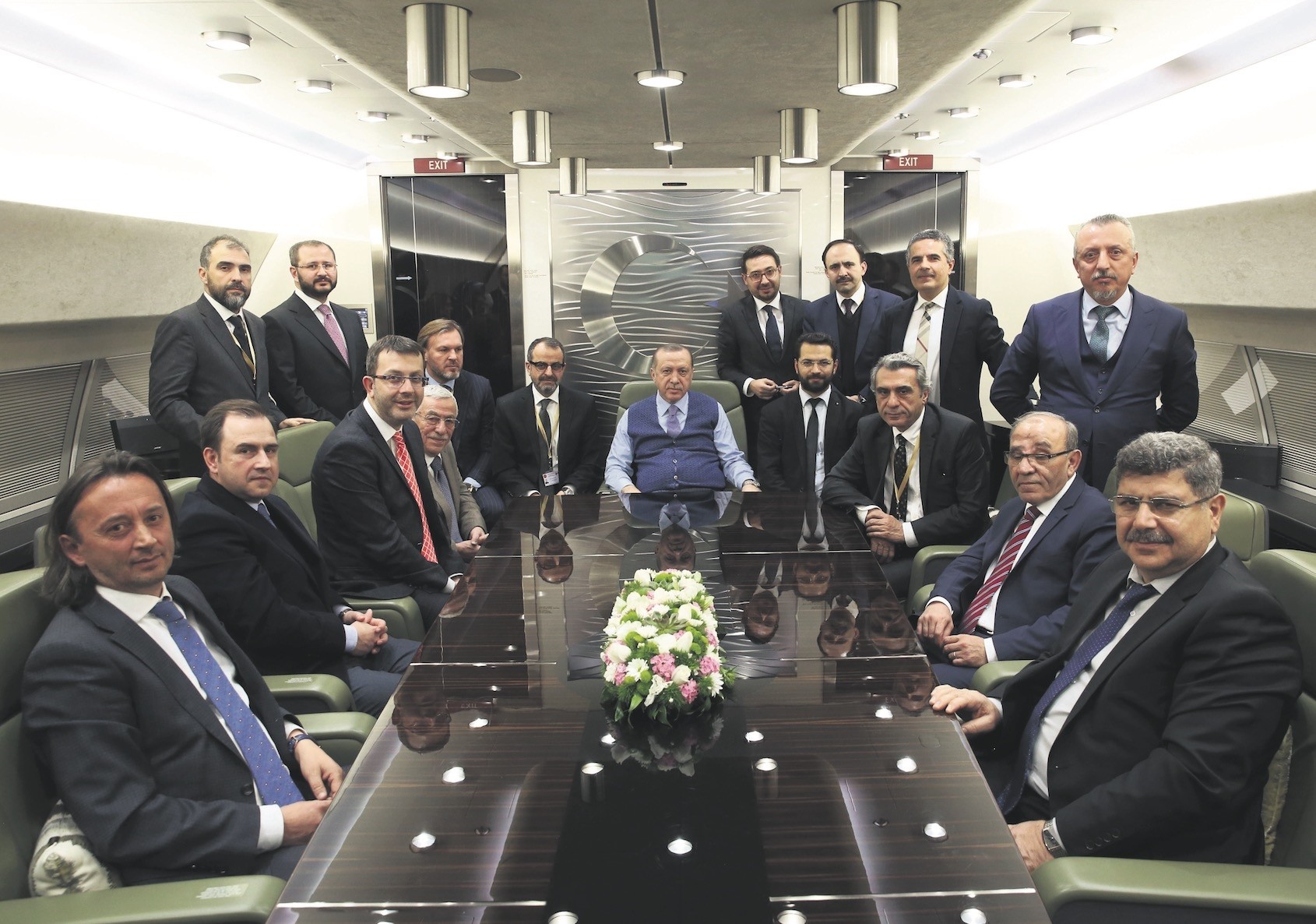 Opposing White Houseu2019s decision on Jerusalem, President Erdou011fan has said that Jerusalem is a u201cred line for Turkey and the Muslim world.u201d
by Serdar Karagöz Jan 08, 2018 12:00 am

President Recep Tayyip Erdoğan affirmed that Turkey will propose a joint diplomatic effort between the Organisation of Islamic Cooperation (OIC) and the European Union to overcome the Israel-Palestine dispute. On his way back from Paris, where he met French President Emmannuel Macron, Erdoğan told journalists accompanying him on the presidential plane, "I will make an offer as the [term president of] the Organisation of Islamic Cooperation on this [Israel-Palestine conflict] issue: Let's gather as the OIC and EU to carry out a common effort. What will this offer bring? We shall see." President Erdoğan's remark came in response to a question about whether the EU and the United Nations will take further action against the U.S. administration's aggressive steps on regional and global issues, including threats to cut aid to Palestine and states supporting the Jerusalem resolution in the U.N. General Assembly.

Following U.S. President Donald Trump's decision on Dec. 6 to recognize Jerusalem as Israel's capital instead of Tel Aviv, the international community shared a common stance against Washington's move. On Dec. 13, the OIC convened an emergency meeting in Istanbul where the leaders of the Muslim world declared the decision "null and void." In addition, the OIC declared, in a statement following the summit, that east Jerusalem was the capital of Palestine "under occupation" and urged the U.S. to withdraw from the peace process and back down from its Jerusalem decision.

The OIC was established during a historic summit in Rabat, Morocco, in 1969 following an arson attack on Al-Aqsa Mosque in occupied Jerusalem. The mosque was set on fire by an Australian Christian named Michael Denis Rohan on Aug. 21, 1969. The shrine and a 1,000-year-old pulpit were totally destroyed along with several historical sites. Rohan had joined a U.S.-based group called the Church of God and believed that setting fire to the mosque would hasten the coming of the messiah. He was later declared mentally unstable and is reported to have died in psychiatric care in 1995.

As one of the most vocal actors on the issue, the Turkish president said from the beginning that Jerusalem was a "red line for Turkey and the Muslim world."

European Union member states also took a common stance against the White House's decision on the historic city, proposing that Jerusalem's status is a matter that should be negotiated between the Palestinians and the Israelis, rather than an imposed unilateral decision.

"The European Union has a clear and united position. We believe the only realistic solution to the conflict between Israel and Palestine is based on two states and with Jerusalem as the capital of both," Federica Mogherini, the High Representative of the EU for Foreign Affairs and Security Policy, who is also the vice president of the EU Commission, said.

"The EU and its member states will continue to respect the international consensus on Jerusalem embodied in, inter alia, the UNSCR 478, including on the location of their diplomatic representations until the final status of Jerusalem is resolved," a statement released by Mogherini's office said, adding that the EU holds a "firm commitment to the two-state solution."

The EU sees the resolution of the Israeli-Palestine conflict through a two-state solution, as a fundamental interest for the Union, where a Palestinian state would be "living side-by-side in peace and security with Israel and its other neighbors."

The 27-member bloc has also opposed the illegal settlements by Israel on the occupied territories since 1967. On Jerusalem's status, the EU says that In terms of peace negotiations, a report, published by the EU in June 2016, said the diplomatic efforts in 2013 and 2014 by U.S. Secretary J. Kerry, which later failed, were strongly supported.

The report also said, "The EU – with the U.N., the U.S. and the Russian Federation – is a member of the 'Quartet,' which in 2002 launched a 'road map for peace' aimed at resolving the conflict. The EU has welcomed the Arab Peace Initiative as a significant contribution from the Arab countries. Regarding the Gaza Strip, the conflict in 2014 has demonstrated the unsustainable nature of the status quo and the need for a lifting of the Gaza closure regime in line with the UNSC resolution 1860 (2009) and for an end to threats to Israel."

On the illegal settlements in the occupied territories, the EU has repeatedly said that it is deeply concerned "about accelerated settlement expansion in the West Bank including east Jerusalem. This expansion prejudges the outcome of final status negotiations and threatens the viability of an agreed two-state solution. The EU considers that settlement building anywhere in the occupied Palestinian Territory, including east Jerusalem, is illegal under international law, constitutes an obstacle to peace and threatens to make a two-state solution impossible."

Trump's move was first challenged in the U.N. Security Council after a draft resolution on the issue was vetoed 14 to 1, signaling the White House on the decision.

Following the UNSC move, Turkey and Yemen also brought the issue to the U.N. General Assembly in a draft resolution, which was passed by 128 for, nine against, with 35 abstentions. Despite the White House explicitly threatening the international community to oppose the decision, the passing of the draft resolution on Jerusalem was interpreted as the international community's unified stance on the issue and as a shared opinion that Jerusalem's sensitive status should be protected.The dispute over the status of the historic city has long been an issue concerning the international community. Jerusalem was first put under international sovereignty and control with the 1947 U.N. Partition Plan, which recommended the division of historical Palestine between Jewish and Arab states to end the conflict in the region.

The U.N. opted for a special status, as Jerusalem is holy to Jews, Christians and Muslims. However, during the 1948 Arab-Israeli War, Israeli forces declared west Jerusalem part of Israel, ignoring the U.N. recommendation.

In the 1967 Six-Day War, Israel again targeted Jerusalem, taking control of the eastern part of the city, which was previously under Jordanian control. Palestinians claim east Jerusalem as the capital of a future state, while the international community has said, as agreed in the 1993 Israel-Palestinian peace accords in Oslo, that the status of Jerusalem should be decided in negotiations between Israelis and the Palestinians.

President Erdoğan also said that he hoped this year would be a new beginning in normalizing Turkey's ties with the EU. He acknowledged the recent period of strained relations with EU member states; however, he said that they are hoping to leave this period behind.

"We are looking forward for a speedy recovery in relations. Making enmities permanent in politics is never a win for the people, it is not beneficial," he explained.

The president highlighted that a wave of some opposition states who were against Turkey had damaged ties; however he emphasized that not all countries had made such moves against Ankara – like France.

Turkey-EU relations have been severely strained, particularly since the July 15 coup attempt in 2016. Ankara says there has been a lack of support against the Gülenist Terror Group (FETÖ) and its members, many of who have sought asylum in Europe.

In addition, the free movement of PKK sympathizers has also led Ankara to lose trust in its European allies. The PKK is recognized as a terrorist group by the EU, the U.S. and the U.K., but its supporters are able to hold rallies in European cities freely as well as conduct recruitment activities and collect financial support.

President Erdoğan said Turkey and the U.S. are not on the same page when it comes to counterterrorism and defining terror. He said the U.S. has its own definition of terror and fights terror on its own terms and this created a dispute between Washington and Ankara.

The two leading disagreements between Washington and Ankara are the extradition of Fetullah Gülen, the leader of FETÖ, and also the U.S.'s military support to the PKK terror organization's Syria affiliate, the Democratic Union Party (PYD) and its armed-wing, the People's Protection Units (YPG).

Turkey has demanded the extradition of Gülen, the mastermind of the failed coup, and provided more than 80 boxes of evidence. However, no steps have been taken yet. Ankara says the process has not moved forward as it has turned political, rather than being a legal one.

Commenting on the recent trial of Mehmet Hakan Atilla, an ex-executive of Turkey's state-owned Halkbank who was tried in New York for evading Iran sanctions, Erdoğan said that the completion of the case in such a short period of time, while no steps have been taken against Gülen, shows that the U.S. is standing behind FETÖ. "All these issues have severely damaged bilateral legal ties between Turkey and the U.S.," the president stressed.In terms of the U.S.'s support to the PKK's Syria affiliate, Turkey has reiterated over and over that the U.S. is supporting a terrorist group in Syria under the guise of fighting Daesh, which is ultimately threatening Turkey's national security.

He also said that Turkey will not allow the establishment of a terror corridor by the YPG along its southern border with northern Syria.