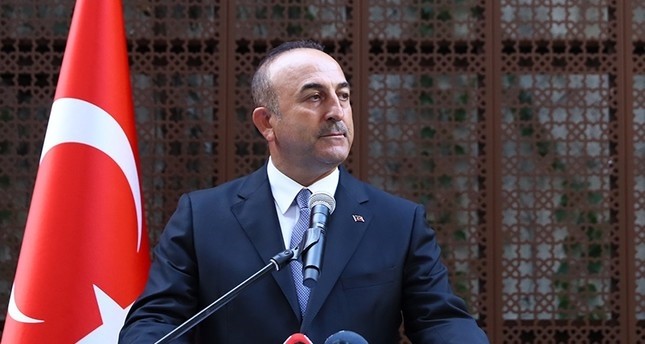 The United States' move to form a 30,000-strong army mainly comprised of the People's Protection Units (YPG) terrorists will have grave consequences in the region, such as creating great chaos, Foreign Minister Mevlüt Çavuşoğlu said late Monday,asserting that the country could not speak for the whole coalition.

Speaking to journalists in Canada's Vancouver city, Çavusşoğlu said: "The U.S. must clarify which side it is on, whether it chooses to be with its allies or terror groups?"

"The U.S. cannot issue a statement on behalf of the anti-Daesh coalition. The move to create an army from YPG terrorists will only cause chaos in the region," he asserted.

His remarks came after the U.S.-led international coalition against Daesh announced Sunday that it would establish a 30,000-strong new border security force with the U.S.-backed Syrian Democratic Forces (SDF), largely controlled and manned by the YPG - the offshoot of the PKK terrorist organization in Syria.

"We will take our own measures [against terror groups]. Regardless of who backs them; whether it is the U.S. or other countries, it doesn't matter to us," he said.

About a possible Afrin operation in Syria, he said that Turkey will fight against YPG/PYD terrorists in Syria just like it did against the PKK.

Turkey has long protested the U.S. support for the PKK/PYD terror group, while Washington has brushed off these criticisms, saying it needs the terror group's help to fight against Daesh in Syria.

The PKK has waged a terror campaign against Turkey for more than 30 years, leading to the deaths of more than 40,000 security forces and civilians -- including more than 1,200 since July 2015.