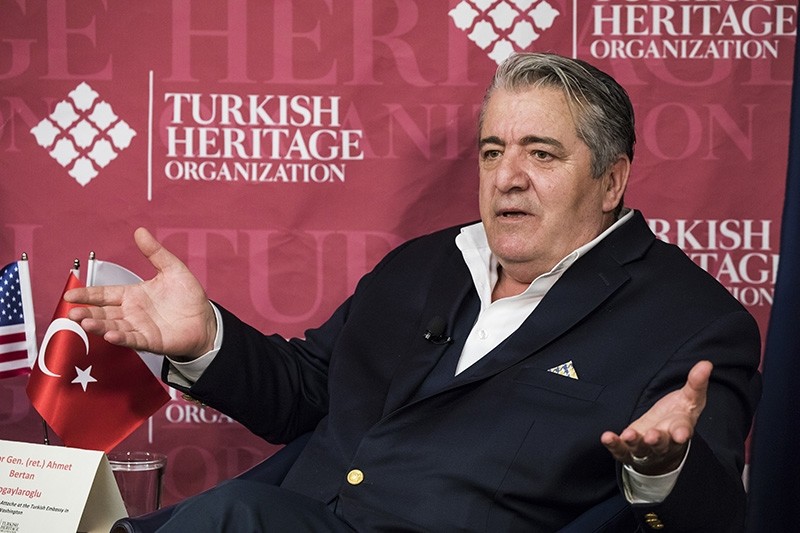 Ahmet Bertan Nogaylarou011flu speaks at the panel organized by the Turkish Heritage Organization in Washington (AA Photo)
by Ragıp Soylu Feb 01, 2018 12:00 am

A former Turkish general who is now leading one of Turkey's most important defense companies warned a Washington audience that the U.S. partnership with PKK's Syrian offshoot People's Protection Units (YPG) was pushing Turkey to the side of Iran and Russia.

"We can balance Iran and Russia in Syria. We have a working experience with them. Please review your Syria policy [that depends on YPG]. We can fulfill whatever your needs are in Syria. But don't push us to the other side. You are pushing us toward Iran and Russia's side," Retired Major Gen. Ahmet Bertan Nogaylaroğlu said at a panel hosted by Washington-based Turkish Heritage Organization, (THO) on Wednesday.

The general, a Deputy Chairman of Directors of Turkish Aerospace Industries (TAI), said that the NATO and the U.S. must show empathy towards Turkish concerns because 13 of the 16 major international problems determined by NATO were around Turkey. "Now we are under threat from Syria. We are on the front [facing] these problems. When will NATO come to our help?" he added.

Retired General James T. Conway, the former commandant of the U.S. Marine Corps, who also spoke at the same panel, was more worried about Turkey's Operation Olive Branch against the YPG targets in Afrin and its already known intentions against Syrian town of Manbij, where U.S. special forces accompany YPG-led Syrian Democratic Forces (SDF) militia. The general said Turkey wasn't very clear about its objectives in Afrin: "What is the end game? Who is going to control this territory? The intent should be clear."

Gen. Conway also reiterated the U.S. official view that there is a risk of confrontation between Turkish and American soldiers in Manbij.

The Turkish general, a former military attaché for the Turkish Embassy in Washington, disagreed. He said there were routine and established channels between two militaries and there is a military delegation based in Turkey. "We will come together, talk and find a solution in Manbij," he added.

The Pentagon released several statements saying that Turkey and the U.S. have necessary means to de-conflict Turkish and American forces since both countries are NATO allies and part of the coalition against Daesh.

Afrin has been a major hideout for the PKK/YPG since July 2012, when the Assad regime in Syria left the city to the terror group without a fight.