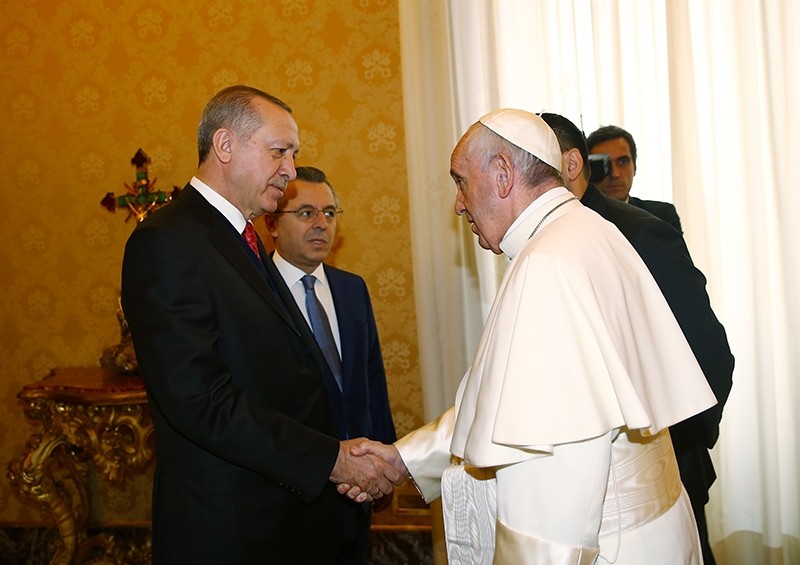 The holy city of Jerusalem's status should be maintained as per the United Nations resolutions and international law, President Recep Tayyip Erdoğan and Pope Francis agreed on during their closed-door meeting at the Vatican yesterday.

According to the Turkish presidential sources, during the meeting between the Turkish leader and the pope, which was said to be held in a warm atmosphere, it was pointed to the importance of stressing United States' Jerusalem decision's drawbacks, and agreed that it should not be put into practice.

In December, the U.S. President Donald Trump had decided to recognize Jerusalem as Israel's capital, instead of Tel Aviv, drawing a large criticism from the international community. The move was condemned and rejected by the Organization of Islamic Cooperation in the same month. The nonbinding resolution declaring the U.S. action on Jerusalem "null and void" was approved 128-9 in a victory for Palestinians. Amid Washington's threats, 35 of the 193 U.N. member states abstained and 21 were absent.

The visit marks the first time a Turkish president visited the Vatican in 59 years and second time ever.

The Vatican backs a two-state solution to the Palestinian-Israeli conflict, with both sides agreeing on the status of Jerusalem - home to sites holy to the Muslim, Jewish and Christian religions - as part of the peace process.

Palestinians want East Jerusalem as the capital of a future independent state, where as Israel has declared the whole city to be its "united and eternal" capital.

The Turkish president expressed his appreciation for the support by the pope on Jerusalem, while Pope Francis thanked President Erdoğan for efforts on Jerusalem and the humanitarian work for the refugees. Francis was one of the most prominent international leaders to criticize the U.S. decision last December to recognize Jerusalem as Israel's capital.

"The status of Jerusalem is a central issue for both Muslims and Christians, both the pope and myself are committed to protecting the status quo," President Erdoğan had told to Italy's La Stampa in an interview.

Erdoğan along with his wife Emine Erdoğan were greeted at the Cortile di San Damaso by the Prefect of the Papal Household Georg Ganswein with an official ceremony. The president later proceeded to his one-on-one meeting with Pope Francis at the Apostolic Palace, which began at 12 p.m. local time and lasted approximately an hour.

During the historic meeting at the holy city for the Catholic world, the issues of refugees, developments in Syria and the Middle East at large, terrorism and inter-religion relations were also discussed between the Turkish president and the pope.

In a statement released by the Vatican's press office, it was said: "During the cordial discussions the bilateral relations between the Holy See and Turkey were evoked, and the parties spoke about the situation of the country, the condition of the Catholic community, efforts in the reception of the many refugees and the challenges linked to this. Attention then turned to the situation in the Middle East, with particular reference to the status of Jerusalem, highlighting the need to promote peace and stability in the region through dialogue and negotiation, with respect for human rights and international law."

'Linking terror to religion is wrong'

During the meeting between Erdoğan and Pope Francis, the importance of joint efforts against xenophobia and Islamophobia were also discussed. Joint efforts against xenophobia and Islamophobia were discussed during the meeting, with the leaders stressing that equating Islam with terror is wrong. They instead stressed that all actors must avoid any provocative remarks promoting this false equivalency. The president highlighted Turkey's efforts on maintaining religious diversity in the country and ensuring that diverse religious groups can co-exist in a peaceful environment. He also communicated with the pope that a concrete example of these efforts is the recent renovation of 14 churches and a synagogue in Turkey.

Pope Francis, a strong proponent of inter-faith dialogue, visited Turkey in November 2014, holding talks with Erdoğan. While in Istanbul the pope acknowledged that current global crises had made Muslims vulnerable to being stigmatized. Francis denounced those who said "all Muslims are terrorists."

'Common steps can be taken for regional peace'

The establishment of peace and stability in conflict zones, as well as raising awareness on humanitarian crisis were also discussed between the two leaders, who agreed on the possibility of taking joint steps and continuing dialogue for future cooperation.

President Erdoğan also communicated the latest information on Turkey's Operation Olive Branch against the PKK terror organization's Syrian affiliate, the Democratic Union Party (PYD) and its armed wing the Peoples' Protection Units (YPG), in Syria's northwestern province of Afrin. The aim of the operation is to eliminate terror threats along Turkey's border with Syria, which have been a consisting threat to Turkey's national security.

The pope and president also exchanged gifts. Erdoğan presented a 24-piece miniature Iznik pottery, which had been made with a ceramics technique popular at the time of Ottoman Sultan Süleyman the Magnificent; he also gave him Mathnawi lectures, by the13th century philosopher Mawlana Jalaladdin Rumi, in Italian and English. During the 50-minute audience, Pope Francis gave Erdoğan a medallion embossed with an angel strangling a "demon of war" -- a symbol of peace and justice.