US will 'work on' its Manbij promises given to Turkey, Tillerson says 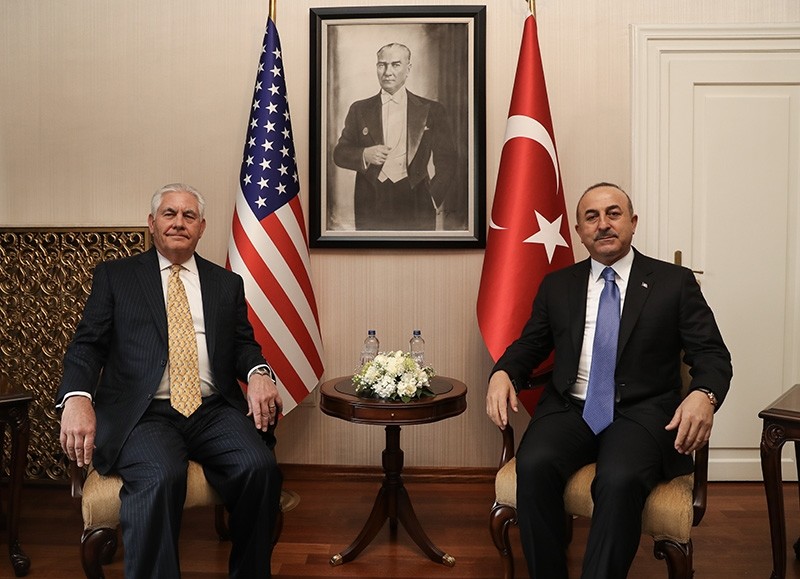 The U.S. will work on the promises it gave to Turkey on northern Syria's Manbij, U.S. Secretary of State Rex Tillerson said in his visit to Ankara in an attempt to soothe the highest tension between the two NATO allies in decades.

Speaking at a press conference with his Turkish counterpart Mevlüt Çavuşoğlu in Ankara, Tillerson said the U.S. and Turkey will no longer "act alone" in Syria. "We will work together... we have good mechanisms on how we can achieve this, there is a lot of work to be done," he said.

Tillerson also said that the U.S. recognizes Turkey's legitimate right to secure its borders, but reiterated Washington's call for Ankara to show restraint in its operation in Syria's Afrin.

Meanwhile, the joint statement released after the meeting reaffirmed the two countries' resolve to fight against Daesh, PKK and other terrorists organizations and their extensions.

Soon after the meeting began, Reuters reported that a senior Turkish official said that Turkey had proposed to the U.S. that YPG terrorists withdraw to the east of the Euphrates River in Syria and that Turkish and U.S. troops be stationed together in the country's Manbij area.

On Thursday, Tillerson also met with President Recep Tayyip Erdoğan at the Beştepe Presidential Palace Complex in Ankara. In the meeting, which lasted over three hours, Erdoğan "strongly and clearly" conveyed his concerns over the U.S. administration's support for YPG terrorists as well as Turkey's priorities and expectations on Syria, Iraq and regional developments, according to presidential sources.

While the meeting was ongoing, dozens of demonstrators, waving Turkish flags, marched to the building in protest of the U.S.' support to the PKK terrorist group's Syrian affiliate the YPG

The group of protesters from left-wing neo-nationalist and anti-American Youth Union of Turkey (TGB) were dispersed by police using pepper spray after repeated calls to stay away from the building, while two protesters were detained.

In addition to their role in various protests, the TGB is known for "sack" attacks on U.S. soldiers visiting Turkey. Putting sacks on U.S. soldiers is viewed as "vengeance" for the infamous "hood event" in Iraq. In 2003 a group of Turkish troops operating in Sulaymaniyah in northern Iraq as part of a special forces team, were detained by U.S. troops who raided their safe house, allegedly acting on a tip-off that Turkmens in the safe house would carry out an assassination of a local Iraqi politician. The U.S. troops put hoods on the captured military personnel, including a major.

The incident, which came at a time when tensions between the U.S. and Turkey were again high due to the Turkish parliament's rejection of involvement in the invasion of Iraq, caused public outrage in Turkey, and the soldiers were released after 60 hours in captivity.