Tillerson expected to convince US generals on Syria policy 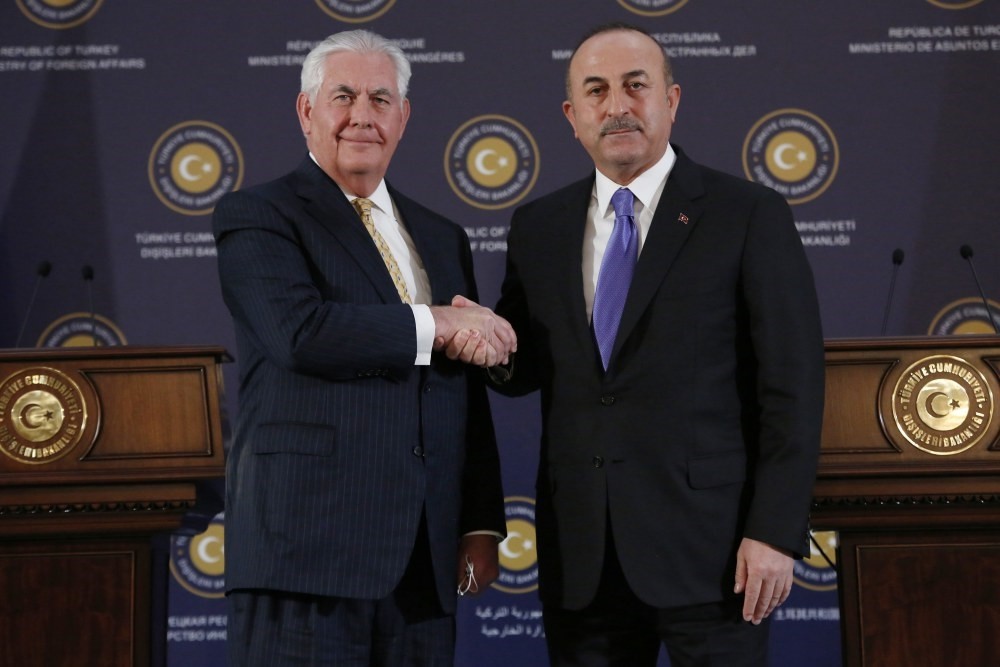 A new era in Turkish-U.S. relations is around the corner as long as Washington keeps its promises and ceases collaboration with terrorist groups

Foreign Minister Mevlüt Çavuşoğlu and U.S. Secretary of State Rex Tillerson's joint press conference showed that Tillerson's visit to Ankara may herald a new era in ties, yet he is now tasked with convincing U.S. generals and the Pentagon to thoroughly heed their promises and cease collaboration with terrorist groups.

"We find ourselves at a bit of a crisis point in the relationship," Tillerson said, acknowledging the state of ties. He further said that his two-day trip to Ankara, including a three-and-a-half-hour meeting with President Recep Tayyip Erdoğan, may bear fruit.

"We are not going to act alone any longer, not the U.S. doing one thing, Turkey doing another," Tillerson said. "We will work together. We have good mechanisms on how we can achieve this, there is a lot of work to be done."

Çavuşoğlu also said they agreed to normalize relations during Tillerson's visit. However, the foreign minister stressed that "there are of course steps to be taken for that [such as the Gülenist Terror Group] and the U.S. support to the YPG."

Recounting unheeded U.S. promises to Turkey, Çavuşoğlu said that Ankara would like to see its concerns taken seriously. In relation to this, he said: "We made a decision to establish a new mechanism."

Designed to salvage ties, the new mechanism is said to scrutinize main sources of concerns between the two countries to find solutions. "We brought forward proposals on how we can address all of the critical issues that are standing between our countries," Tillerson said. Çavuşoğlu added that these mechanisms do not mean prolonging the current crises. "On the very contrary, they will be mechanisms to get results."

A joint statement released following the press conference said that the first visit for the mechanism will be in mid-March. "In the spirit of our longstanding alliance, we reaffirm our commitment to resolving outstanding issues in the bilateral relationship. The two sides agreed to establish a results-oriented mechanism for this purpose. This mechanism will be activated no later than mid-March," it said.

Despite the reciprocal statements that ushered in a new term for ties, a handful of matters remain untouched. The presence of the PKK's Syrian affiliate People's Protection Units (YPG) in Manbij and U.S. arms supply to the terrorist group are two of them. "We need to be sure that the YPG withdraws east of the Euphrates. First, the YPG must vacate Manbij," Çavuşoğlu asserted.

Citing Washington's pledge in 2016 to make the YPG leave Manbij, which has not yet been kept, the foreign minister said that the city is 95 percent Arab. "Stability will never be established there with the YPG."

As for Manbij, Tillerson did not elaborate on the issue.

"The U.S. will work on promises given to Turkey on Manbij" he said.

Ankara has long called for YPG forces to move east of the Euphrates River in northern Syria. It has also previously said it might extend its counterterrorism operation to the town of Manbij, some 100 kilometers east of the Afrin region. U.S. troops are stationed near Manbij.

Previously, the U.S. administration under former President Barack Obama had promised Ankara that the YPG would move east of the Euphrates. However, despite warnings from Ankara, the promise was not kept and the YPG has remained in the town.

The issue recently reached an unprecedentedly fevered pitch as Erdoğan earlier this week warned the U.S., "We will annihilate every terrorist, starting with those standing next to them. And then they will understand it would have been better for them if they were not next to them."

Regarding Syria, Tillerson asserted, "There is no daylight between Turkey and the U.S."

Moreover, the joint statement said, "To this end, we will decisively stand against all attempts to create faits accomplis and demographic changes within Syria, and are dedicated to coordination on transition and stabilization of Syria."

FUND FOR YPG NOT MORE THAN NECESSARY

However, the reality on the ground seems different. The U.S. arms support to the PKK-affiliated YPG was another topic at the press conference and a main point on the agenda in his meetings on Thursday and Friday.

Tillerson was asked about the Pentagon's recent 2019 budget, which envisages a $550-million funding to the YPG. Again, the secretary dodged the bullet. He said a sum is allocated to the YPG as part of anti-Daesh campaign.

"No more is being provided than we believe is necessary," he added.

Nonetheless, the U.S. secretary will probably need to convince Washington to cease cooperation with the YPG or remarkably diminish it if the two sides are to enter a new era in relations. Pouring in $550 million to the cause of the YPG, which actively fights against the Turkish military in Afrin right now, and calling it "not any more than necessary" may not do the trick in the upcoming period.

READY TO EXAMINE EVIDENCE ON FETÖ

Tackling the Gülenist Terror Group (FETÖ) threat and extraditing its leader Fetullah Gülen, who lives in Pennsylvania, will also have to be addressed. During the press conference, Tillerson said that the U.S. is ready to examine and process any evidence that Ankara might present.

In response, Çavuşoğlu said that several U.S. states and the FBI gradually started to scrutinize some Gülenist schools, which in his opinion would help the U.S. understand FETÖ's shadowy activities.

Ankara accuses Gülen of masterminding the July 15, 2016 coup attempt in Turkey, and the Turkish government has been vehemently asking for his extradition since then. Ankara claims to have sent dozens of boxes full of evidence to Washington, linking Gülen and his group to the coup attempt. Yet Washington continues to drag its feet as Gülen enjoys a range of opportunities in the U.S.