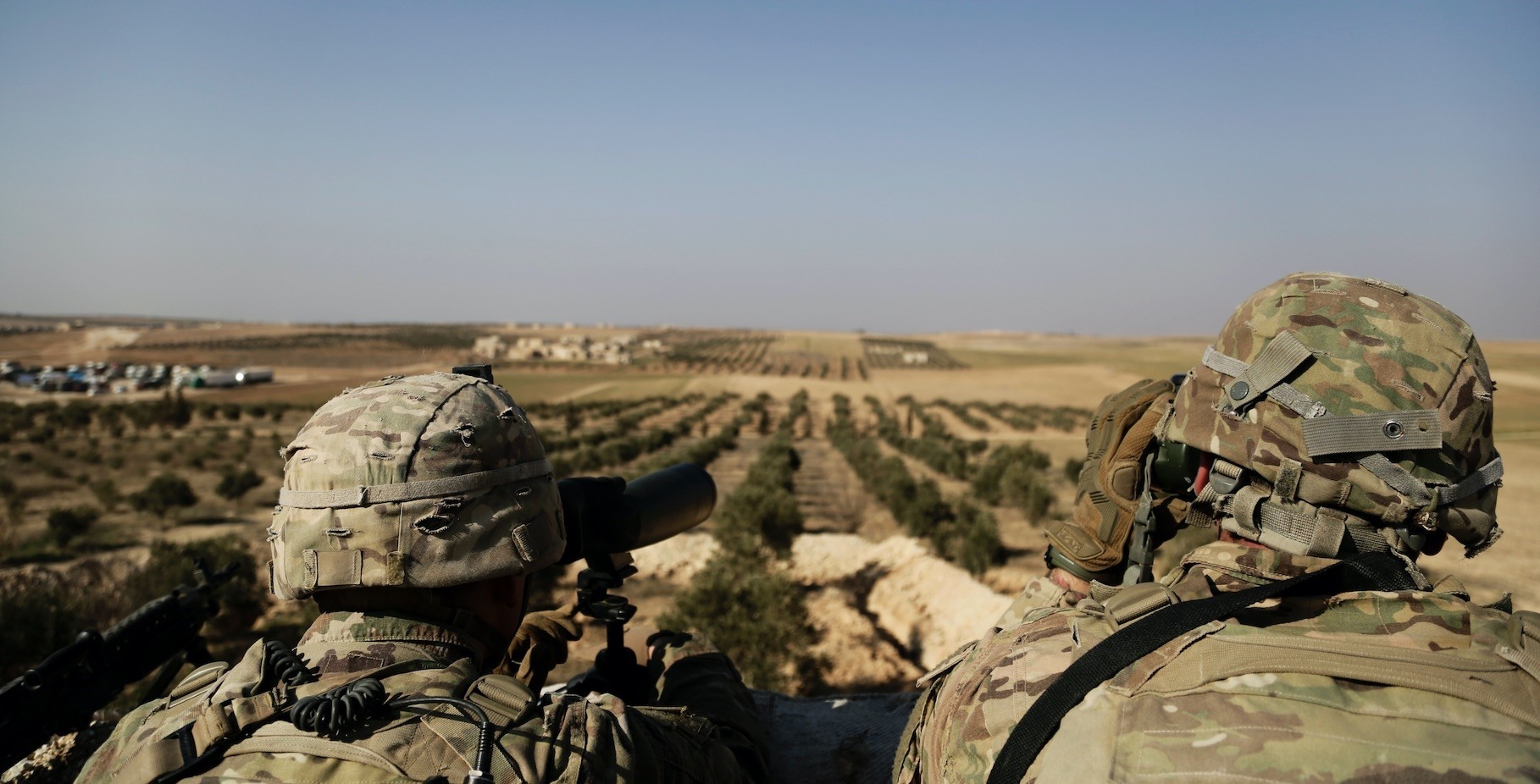 American troops look out toward the border with Turkey from a small outpost near the town of Manbij, northern Syria, Feb. 7.
by daily sabah Feb 19, 2018 12:00 am

While there has been signals of normalization in Turkish-U.S. ties, Ankara has vowed to continue operations against the PKK, and its affiliate groups along its southern borders, and that the rebuilding of trust will only be possible with Washingtons's concrete steps taken against the presence of the terrorist group in northern Syria

The reported offer made by Turkey to the United States on cooperation in Syria's Manbij is expected to speed up the normalization process in strained U.S.-Turkish relations; however, the threat of the PKK terror organization and its affiliates in northern Syria and northern Iraq must be eliminated fully, not just in Manbij, for Ankara to fully normalize ties with Washington in regional policies and partnerships, according to expert opinion.

"First of all, the U.S. had made a promise to Turkey on removing the People's Protection Units (YPG) [the armed wing of the PKK's Syrian affiliate, the Democratic Union Party, the PYD] from Manbij. This was not fulfilled. The possibility of cooperation over Manbij and the elimination of the YPG there, should not, however, mean the continuation of U.S. cooperation in other areas of northern Syria or with the PKK in northern Iraq and Iraq's disputed areas," Abdullah Ağar, a former military officer and security expert, told Daily Sabah. The U.S. administration under former President Barack Obama had promised Ankara that the YPG would move east of the Euphrates. However, despite warnings from Ankara, the promise was not kept, and the YPG has remained in the town. Meanwhile, the U.S. also continued to militarily support the group with more than 4,000 truckloads of weapons and military equipment.

Last week, U.S. Secretary of State Rex Tillerson visited Ankara where he met President Recep Tayyip Erdoğan and Foreign Minister Mevlüt Çavuşoğlu. During the discussions, Turkey's concerns over the U.S.-YPG partnership in Syria were conveyed to Tillerson, while the recent operation on Afrin, Syria, launched on Jan. 20, was also discussed.

During the joint press conference by Tillerson and Çavuşoğlu, both officials stated the necessity of opening a new page in relations and to work out disagreements through close communication and cooperation. Ankara, however, reiterated its position over the PKK and its affiliated groups, stating that the rebuilding of trust will only be possible with the U.S. taking concrete steps against the group.

"Accepting cooperation in Manbij against the YPG, while ignoring the U.S.-YPG partnership in other regions will be understood as legitimization of the YPG, a position that Turkey should not accept, as there is no difference between the PYD, the YPG and the PKK. They all constitute a national security threat to Turkey and their existence cannot be tolerated by Turkey," Ağar said, while underlining that the U.S. has committed a conceptual, geopolitical mistake and a crime according to its own laws by partnering with the PKK's affiliate groups in northern Syria.

On Friday, a Turkish official told Reuters that Turkey has proposed to the United States that the PKK's Syrian YPG withdraw east of the Euphrates river in Syria and that Turkish and U.S. troops be stationed together in the country's Manbij area. The official, who declined to be identified because the information had not been made public, said the United States was considering the proposal, which was made to Tillerson during his two-day visit to Ankara.

Ankara has underlined that operations to eliminate all terror threats posed to its national security will continue full speed. However, the Turkish leadership has also said they will not close diplomatic channels to find a solution to the ongoing crisis.

"We don't look at the identity or size of those who incite enmity, threaten our independence and future," said President Erdoğan yesterday in Ankara during his party's provincial party congress in the capital. "No decision on any matter concerning our region can be taken if Turkey is not included," the president also added. "The promises are of course important; however, we look at the actual result. We look at what happens on the field. We continue negotiations, but also the operations in the field," Erdoğan underlined. The YPG's ultimate aim is to establish an autonomous region in northern Syria by connecting the northwestern Afrin canton to the Kobani and Jazeera cantons in the northeast. As such, Turkey's operation aims to put an end to the group's autonomy plans, which Ankara terms a "terror corridor."

On Saturday, Defense Secretary of Defense Gen. James Mattis said the U.S. would work with Turkey on locals taking control of liberated areas in Syria. "We concur with Turkey on the need for locals taking control of the liberated areas, and we are going to work with Turkey on the locals taking control, and with Turkey on every other irritant or diversion or distraction or every area." "We have many areas of absolute concurrence, too," Mattis told reporters en route to Washington, according to a Department of Defense statement. While the U.S. partnered with the YPG in fight against Daesh under the umbrella group the Syrian Democratic Forces (SDF), Turkey has long argued that the fight against the terrorist group cannot be carried out with another one, referring to the PKK's Syrian affiliate. Turkey, the U.S. and the EU lists the PKK as a terrorist group; however, Washington and Turkey's Western allies have ignored the organic links between the PKK and the PYD/YPG, not listing the group in Syria as a terrorist group.

The foreign minister told the panel at the security conference that recent developments in the region proved that the YPG was pursuing its own goal in the region, instead of making Daesh its focus. "We saw in Raqqa how they cooperated, how they made deals," he said, referring to a secret deal last year that enabled thousands of Daesh fighters to leave the city, the former stronghold of the terrorist group in Syria, without a fight. "And now the YPG releases all Daesh elements, they stand shoulder to shoulder against Turkish troops," he said. Local media reported that the PYD/PKK released around 400 Daesh militants from prisons in Raqqa, Afrin and Deir ez-Zour on the condition of fighting against Turkey.

"We are not going to act alone any longer, not the U.S. doing one thing, Turkey doing another," Tillerson said on Friday during the joint presser with Çavuşoğlu.

"We will work together. We have good mechanisms on how we can achieve this, there is a lot of work to be done," he added. During the joint presser on Friday, Çavuşoğlu also said they agreed to normalize relations during Tillerson's visit. However, the foreign minister stressed, "There are of course steps to be taken for that [such as the Gülenist Terror Group] and the U.S. support to the YPG."

"We need to be sure that the YPG withdraws east of the Euphrates. First, the YPG must vacate Manbij," Çavuşoğlu also said. Citing Washington's pledge in 2016 to make the YPG leave Manbij, which has not yet been kept, the foreign minister said that the city is 95 percent Arab: "Stability will never be established there with the YPG." The two countries "agreed to establish a results-oriented mechanism," which will be activated no later than mid-March. Asked how this mechanism would work in Syria's Afrin and Manbij, Mattis said there was a "commitment" to work them out. "Yes, how would the mechanisms work, for example, in Afrin. That's exactly what we have to work out ... We are going to put them in place," he said.

According to Daily Sabah sources, as part of the new steps on the established mechanism, Çavuşoğlu will visit the U.S. in March.

"The U.S. will work on promises given to Turkey on Manbij," Tillerson had responded to Ankara's concerns over previously broken promises.

Commenting on the issue to Anadolu Agency (AA), President Erdoğan's key adviser and International Relations Professor at Yıldız Technical University Gülnur Aybet said Tillerson's recent visit to Ankara took place in a positive atmosphere, and the decision to establish a joint mechanism was a step in the right direction to improve relations with Turkey. Aybet said, however, that Washington has been contradicting itself with its policies since the beginning of the Syrian crisis. "The U.S. sometimes said the regime must change, but sometimes took a step back from this statement," Aybet said, adding that it also said it would stop cooperation with the YPG after the liberation of Raqqa, but did not do so.