Get rid of influence of US, Russia, establish dialogue with regional actors, CHP leader says 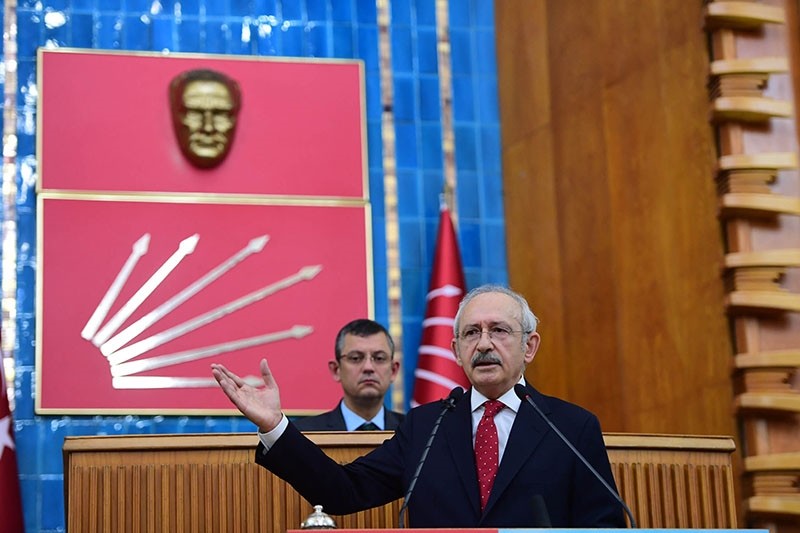 The main opposition Republican People's Party (CHP) Chairman Kemal Kılıçdaroğlu called on the government to fend off Russian and U.S. influence, saying that the two powers were the main source of weapons in Syria, urging the government to pursue dialogue with its neighbors instead of imperial powers, saying that it was the only way to resolve the solution and bloodshed of Muslims.

Addressing CHP deputies at the parliamentary group meeting, Kemal Kılıçdaroğlu said that Operation Olive Branch in Syria's Afrin has been ongoing successfully, and voiced support for the government's criticism on the U.S.' support for the PKK-affiliated People's Protection Units (YPG) in Syria, in addition to the Gülenist Terror Group (FETÖ), whose leader Fetullah Gülen is currently residing in the U.S. state of Pennsylvania.

Turkey has repeatedly urged the U.S. to stop its military support for the PKK's Syria affiliate People's Protection Units (YPG) but to no avail. So far, the U.S. has provided 2,000 planeloads and 5,000 truckloads of weapons and ammunition to the YPG terrorists. Likewise, until the beginning of Turkey's Operation Olive Branch, YPG terrorists were under the protection of Russian troops in northwestern Syria's Afrin.

The PKK is recognized as a terrorist organization by Turkey, the U.S. and the EU. However, despite the organizational links between the PKK and the YPG, the U.S. has continued supporting the group militarily in Syria.

Kılıçdaroğlu said that the government needs to engage in dialogue with Iran, Iraq and Syria in order resolve regional issues, instead of the U.S. and Russia, which back regional conflicts in order to wage proxy wars.

"Can't the heads of state of these four countries come together and solve their own problems? Can't they decide whether their own country lives in peace in itself and [has peaceful relations] with other countries? Do imperialist powers have to step in, and do we have to do this in company with them [U.S. and Russia] ? You can't do this with them, you can't bring peace and you can't bring calm [like this]. They will put weapons in your hands and send you to Syria," Kılıçdaroğlu said.

"Whose blood is being shed Is it the blood of Americans, no. The blood of Russians, no. It is Muslims' blood. Who provides the weapons? It's either the U.S. or Russia. Don't you see?"

Kılıçdaroğlu previously urged the government to initiate dialogue with the Assad regime, which is the internationally recognized government of Syria but subject to numerous international sanctions, especially from the U.S. and EU member states.

The government rejects engaging in dialogue with the Assad regime due to its oppressive policies culminating in the Syrian civil war since 2011, leading to the deaths of more than 600,000 people and causing millions to flee the country, primarily to Turkey with 3.5 million refugees.

"We don't know whether a minute for meeting was recorded. [Normally] you take notes, record the meeting and put it into state archives. Probably, they discussed the Zarrab case and Halkbank, and that's why they preferred this way [not recording] in order to prevent this things from being heard," he said.

According to presidential sources, Erdoğan "strongly and clearly" conveyed his concerns over the U.S. administration's support for the PKK-affiliated terrorists as well as Turkey's priorities and expectations on Syria and Iraq.