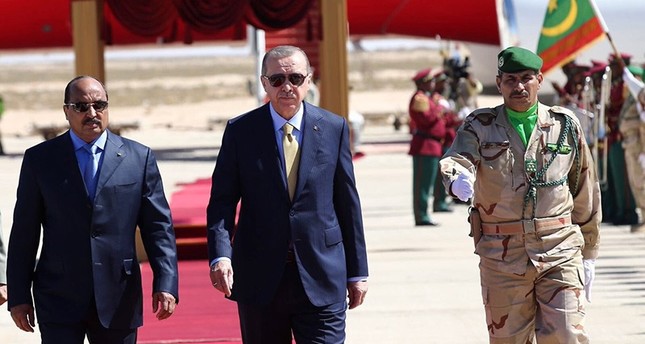 Turkish President Recep Tayyip Erdoğan arrived in Mauritania late Wednesday on the second leg of a four-country tour of Africa.

Erdoğan, also accompanied by a delegation of businessmen and investors, is expected to hold talks to boost trade ties.

During Turkey's first-ever official visit at the presidential level to Mauritania, Erdoğan will discuss bilateral relations, regional and international developments, and the fight against terrorism.

As part of the visit, the Turkish Cooperation and Coordination Agency (TİKA) will open an office in the country.

Governed by a semi-presidential system, the Islamic Republic of Mauritania has a significant place in West Africa, given its geographical location.

Located on the coast of the Atlantic Ocean, Mauritania connects Western Sahara, the Great Sahara and the Mediterranean and the country extends into an area of 1.03 million square kilometers. A neighbor to Algeria, Mali, Senegal and the Sahrawi Arab Democratic Republic, Mauritania has a population of 4.24 million according to official data.

Different ethnic groups like the Halpulaar, Takruris, Soninke, Wolof, and Bamara live in Mauritania. Though these various groups are considered cultural value, sometimes conflicts between them pose a risk for the country's stability.

Declaring independence in 1960, Mauritania became a member of the U.N. the next year.

The country has witnessed 16 coups in its short history and this is noteworthy since military influence is still being observed today. Three of these said coups were recorded to be "successful."

Taking office in 2009, President Aziz, who has a military background, was re-elected in the 2014 elections, securing 82 percent of the vote.

Nowadays, the government is preoccupied with the integration of emancipated slaves and the fight against terrorism and smuggling. It is closely cooperating with Western countries and other nations on the African continent to resolve these issues.

The national income per capita in Mauritania, which has an annual revenue of $4.8 billion, is around $400.

Since Mauritania has been able to achieve steady growth since 2010, it has prevented security problems in the region from spreading into the country.

The regulations issued by the administration in order to facilitate the entry of foreign investors into the country have contributed to the social development by giving impetus to this stability.

Among the most dynamic sectors of Mauritania's economy are construction, fisheries and trade.

Although agriculture is limited in Mauritania, where 90 percent of its land is located in the Sahara Desert, it is concentrated in the south of the country, accounting for 40 percent of employment.

Poverty is among the biggest problems in Mauritania. Fifty-five percent of the country's population is poor, while 30 percent is classified as extremely poor.

As a result of studies conducted by foreign companies in the region in recent years, serious amounts of oil and gas have been detected on the country's coasts.

It is reported that if the reserves are producible to the expected level and necessary investments are made, there may be serious changes in the country's economy within five to 10 years.

Reports suggesting that these changes could make the country a net exporter of energy indicate that this will also reduce poverty in the country.

Despite common cultural and historical ties between Mauritania and Turkey, political relations between the two countries experienced a real sense of progress after 2008.

Mauritanian President Aziz's visit to Turkey in 2010 after Former Minister of Foreign Affairs Ali Babacan's visit to the country and the mutual opening of embassies gave a great impetus to bilateral relations.With the objective of developing commercial relations between the two countries, the Joint Economic Commission mechanism and the Turkey-Mauritania Business Council were established. As a result, the volume of mutual trade increased from $22 billion in 2008 to $131.9 million in 10 years.

Turkish companies in Mauritania operate especially in fishing in addition to construction and furniture industries. Currently, more than 40 boats owned by Turkish entrepreneurs are fishing in Mauritania. There are also Turkish companies that produce fish products, including fish oil, in the country.Turkey imports fish, metal ores, feed, and raw and ready leather from the country. The main export items, on the other hand, are machinery and equipment used in iron, steel, cereals, industrial sectors, coffee, tea, spices, transportation vehicles, textiles, furniture, rubber, petroleum, processed oil and plastic products.