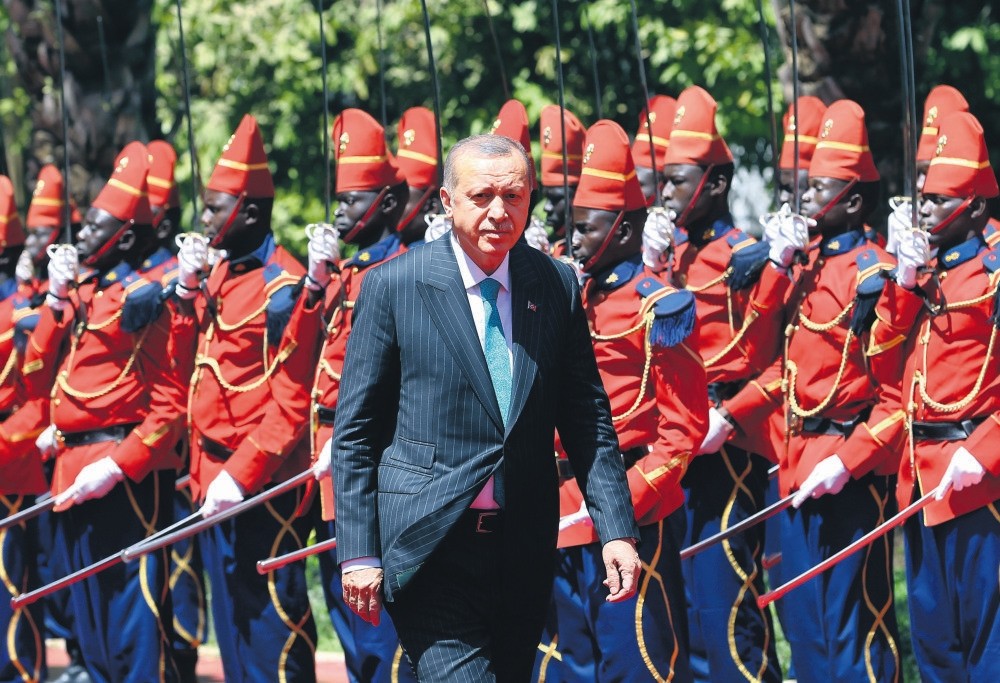 President Erdou011fan at the Palace of the Republic in Dakar, Senegal, during an official ceremony where he was welcomed by Senegal's President Macky Sall, March 2.
by Ali Ünal Mar 03, 2018 12:00 am

President Recep Tayyip Erdoğan said on Friday that relations between Turkey and Africa are in an ever-strengthening upward trend as part of Ankara's Africa policy and that there are ongoing steps to further develop relations on a win-win basis.

"We give great importance to Africa," the president told accompanying journalists in Senegal during his four-day trip to the continent where he visited Algeria, Mauritania, Senegal and Mali from Feb. 26 to March 6.

He added: "It is because Africa is significant to us that we have increased the number of embassies on the continent from 12 at one time to 42 presently."

Over the last 10 years, Erdoğan has paid more than 30 visits to 28 African countries – the most of any Turkish president. On his most recent trip, Erdoğan met his counterparts and other leaders. He was also accompanied by senior ministers and a large delegation of Turkish business figures. Many new bilateral agreements have been inked so far on the visit, particularly in tourism, mining, fisheries, energy, military training and the defense industry.

"We support Africa within the perimeters of our strength. For instance, we are going to provide $5 million to the G5 Sahel Force. We give support to the defense industry, as well. Of course, we are going to continue support of this kind," he said.

Erdoğan added that Turkey is not trying to compete with China's initiatives in Africa, given China's financial capabilities. Erdoğan said that he would also visit the southern parts of the continent, particularly South Africa, as it is one of the strongest countries in the region.

With Turkey's Africa initiative, the country's trade volume with African countries increased sixfold in the past 15 years, reaching $17.5 billion. Increased economic cooperation has also taken political relations to the next level.

"Africa for us is an essential continent. It cannot be neglected. We approach Africa with affection, not with a colonial mentality," he said. He added that relations, built on Turkey's historical ties to the continent, need to be taken to the next level.

He said that the cooperation and solidarity against the Gülenist Terror Group (FETÖ) during the failed July 15, 2016 coup attempt from the countries he visited and against FETÖ activities in these countries has been noteworthy.

Turkey waiting for US words to turn into actions

President Erdoğan said Turkey has not seen the realization of the U.S. administration's promises to Ankara on Syria, and particularly concerning the U.S. partnership with the People's Protection Units (YPG), the Democratic Union Party's (PYD) militia in Syria and the presence of the group in Manbij.

"The Americans have been telling us, since [former President Barack] Obama's term, that [the YPG] will not remain in Manbij and withdraw those who are there to the eastern parts of the Euphrates. In phone calls and bilateral meetings they have always promised us this, but in reality they did not withdraw the YPG from there," Erdoğan said in response to a question on U.S.-Turkish discussions on Manbij.

The president added that the issue was also discussed during the visit from U.S. Secretary of State Rex Tillerson in Ankara, and that Tillerson had offered to withdraw the YPG from Manbij and establish a joint mechanism for security of the town that would allow control in half of Manbij by U.S. forces and the other half by Turkish forces. "I responded, 'Neither you, nor us should control the security. Manbij should be owned by the people of Manbij," the president said.

Erdoğan added, however, that if the U.S. offer means the establishment a joint-security mechanism during the return of local Arabs to their homes, then Turkey can participate in it. "As I said, we want to see words turn into actions."

The U.S. has supported the PKK terror organization's Syrian affiliate PYD's YPG forces under the guise of Syrian Democratic Forces (SDF) in the fight against Daesh, which has brought relations between the two NATO allies to historic low. Ankara argues there is no difference between terrorist groups and that the YPG has clear organizational links with the PKK. The PKK is considered a terrorist group by the U.S., EU and Turkey.

On Jan. 20, Turkey launched Operation Olive Branch with the Free Syrian Army (FSA) in Syria's northwestern Afrin region to eliminate YPG elements posing a threat to its national security. Turkish leadership has also said that after Afrin, the next operation will be launched in areas east of the Euphrates and the YPG-held town of Manbij. There are also U.S. forces positioned in Manbij, which brings the risk of military confrontation between Turkish and U.S. forces, a possibility that has recently pushed Washington to engage with Ankara.

No going back from S-400 deal with Russia

The president said Turkey will not take a step back from its deal with Russia over purchasing S-400 defense missile systems and that Turkey's purchases are concerns only for Turkey.

"It has been 16 years [of leadership], if you count my prime ministerial term also. They should know us by now. For us, the words spoken are past recalling. That job is complete since we have agreed with the Russians," Erdoğan said, responding to the recent discussion on whether Turkey will reconsider the S-400 deal if the U.S. seeks to impose sanctions on Ankara.

"We expect from our strategic partners and allies to do what the rules of an alliance requires. For example, it is not possible for us to accept an ally of ours to provide weapons to a terrorist group, and also for free," Erdoğan said, criticizing the U.S. support for the People's Protection Units (YPG) in Syria.

In December, Turkey officially signed a $2.5 billion agreement with Russia for the S-400s - Russia's most advanced long-range anti-aircraft missile system.

Last year, Turkey, Iran and Russia agreed in the Kazakh capital Astana to establish de-escalation zones in the northern province of Idlib and parts of the neighboring Latakia, Hama and Aleppo regions. Under the Astana agreement, Turkey is set to gradually establish 12 observation points from Idlib's north to south, which would aim to monitor and sustain the current cease-fire agreement for the de-escalation zones, deliver humanitarian aid to people in need and ensure the secure return of displaced people.

Resources must be shared by Turkish, Greek Cyprus

Erdoğan also said the oil and natural gas resources in the Mediterranean Sea should be shared by both Turkish and Greek Cyprus in a just and equal way.

The president made the remarks upon a question on his recent phone conversation with the French President Emmanuel Macron, which Macron reportedly asked Turkey to be more lenient on the drilling issue near the divided island.

"We are asked to be softer on Cyprus and the exclusive economic region. I told him we act in accordance with international law. Both the North and the South have rights over the oil and natural gas that would be found there. We cannot accept a one-sided move here," Erdoğan said, also calling on the Greek Cypriot President Nicos Anastasiades to be more transparent on drilling deals and discuss them with the Turkish Cypriot leadership.

Turkey has been repeatedly saying that it won't allow the Greek Cypriot government to proceed with a "unilateral" offshore gas search as long as the rights of the Turkish Republic of Northern Cyprus to the natural resources of the island are being ignored.