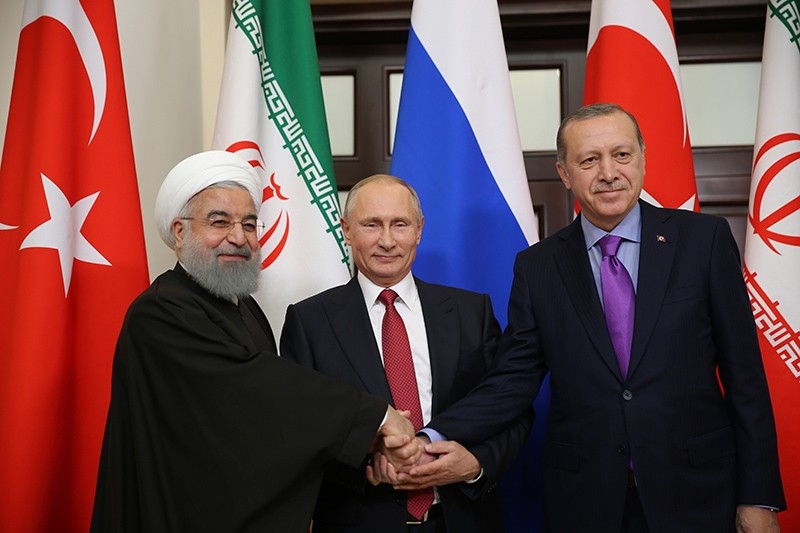 Russian President Vladimir Putin said Wednesday that agreements between Turkey, Russia and Iran regarding Syria are working despite the three countries having some disagreements over the situation in the region.

"Every country has its own interests. The first thing to always do is to respect their interests, making sure they respect ours. This is a complex process," Putin said when asked if any country could be trusted, in an interview with journalist Vladimir Solovyov included in a documentary, "World Order 2018."

"However complicated relations between countries of the region are, we entered negotiations [on Syria] with Turkey and Iran and acted as a guarantor of certain agreements, and these accords work," he said.

Last year, Turkey, Iran and Russia agreed in the Kazakh capital of Astana to establish de-escalation zones in the northern province of Idlib and parts of neighboring Latakia, Hama and Aleppo. Under the Astana agreement, Turkey is set to gradually establish 12 observation points from Idlib's north to south to monitor and sustain the current cease-fire agreement for the de-escalation zones, deliver humanitarian aid to people in need and ensure the secure return of displaced people.

Kazakh Foreign Minister Kairat Abdrakhmanov told reporters yesterday that the Russian, Turkish and Iranian foreign ministers plan to make a joint statement during their meeting on Syria in Astana on March 16, TASS reported.

"According to information I possess, the underwriter states [on the ceasefire in Syria] that the foreign ministers of Russia, Turkey and Iran plan to make a joint statement. This document may contain the key areas of development of the Astana process, including the possible date of the next round of talks," Abdrakhmanov said in Kazakhstan's lower parliamentary chamber.