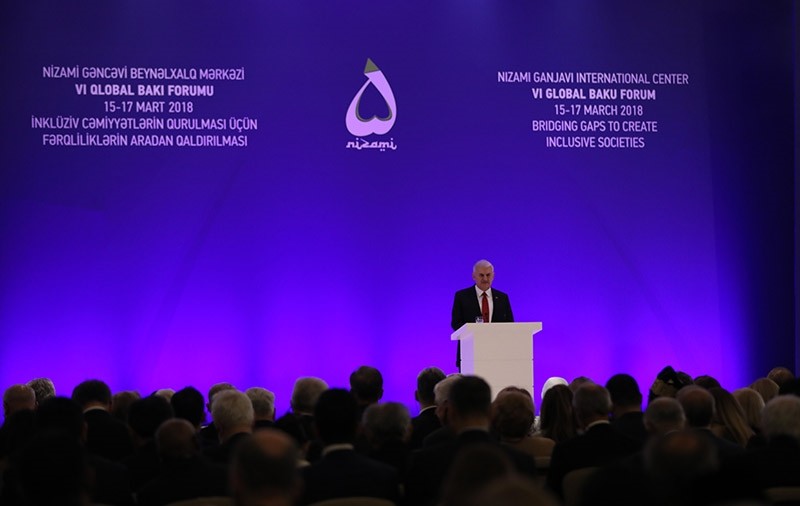 Reform for a U.N. powerless to end global conflicts is a "necessity", Prime Minister Binali Yıldırım argued on Thursday.

Speaking at the Sixth Global Baku Forum in Azerbaijan, Yıldırım said a U.N. based on problem-solving, not rivalries, was "an inevitable necessity."

"The U.N. Security Council is unable to give the necessary response to [international] rivalries while humanity is dying and chemical gas [weapons] are being used, and is unable to end this violence."

He urged the U.N. to establish a more "confidence building" structure and added: "Global peace and solidarity can only be established if everyone does not preserve double standards to conflicts and produce results based on humanity and human values."

Yıldırım asserted that Turkey is a "reliable" country for its allies and friends but also "an actor for peace and prosperity" for the region not only in the Middle East but also in the Balkan and Caucasus regions as well as in many parts around the world.

He cited as an example the fact that Turkey hosts over 3.5 million Syrian refugees.

"If we hadn't done this, the instability in the region was going to escalate and perhaps it would be impossible to control the ongoing terror events," he said.

Calling on the international community to increase global cooperation in efforts to establish peace and stability, Yıldırım stated the Nagorno-Karabakh conflict remained a "wound" for Azerbaijan.

"Though many international organizations such as the UN and OSCE [Organization for Security and Co-operation in Europe] accept this injustice and urged to fix this issue, they failed to take necessary steps on the issue," he added.

Azerbaijan and Armenia remain in dispute over the occupied Karabakh region. Karabakh broke away from Azerbaijan in 1991 with Armenian military support, and a peace process has yet to be implemented.

Azerbaijani President Ilham Aliyev also underlined the necessity of global peace and security. He stated the purpose of the global forum was to strengthen stability, security and coexistence.

"This is also a genocide against our culture. The conflict resolution must be based on international law and UNSC resolutions [...] Unfortunately, these resolutions are not implemented and no sanctions were imposed on Armenia."

He urged for the end of the "status quo" in Nagorno-Karabakh and added that nations can only have peace and prosperity if they are independent.

'Common will, against threats, a must'

Later in the day, the Turkish premier spoke at a panel entitled "Power: Big Powers and the Rest" at the forum and urged for a common approach by the international community in dealing against threats.

"Armed conflicts, terror, war, mass migration and cyberattacks are no longer a problem for specific regions but for all countries. It is unlikely for any country to combat these threats alone. Humanity must develop a common will in efforts to guarantee its future against these threats and must display more solidarity," Yıldırım said.

He once more criticized the international community over its "rivalry" stance in Syria, saying: "Over 70 countries are claiming that they are in Syria for a solution but a solution is yet to come. Because there are rivalries in the region [...]."

"Millions of innocent people are paying the price for an understanding that is based on who is to become influential in the region," he added.

Yıldırım said Turkey attaches great importance to the United Nations but reasserted that it "falls short" in finding a solution to global conflicts.

The forum was also attended by current and former state officials from 50 countries and welcomed 500 participants.