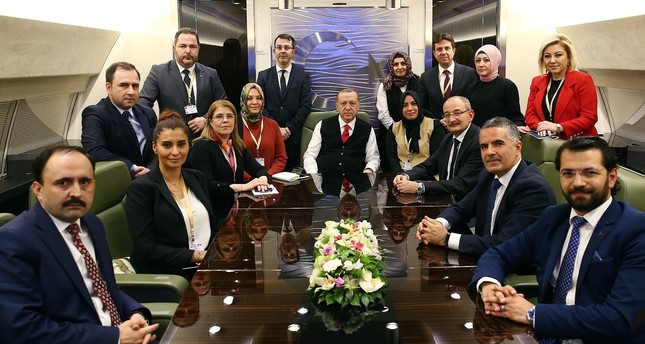 President Erdoğan spoke journalists accompanying him on the presidential plane on his return from Varna, Bulgaria.

Turkish officials expect more than just praise of Ankara's effective role in managing the refugee crisis as of part of the Turkey-EU migrant deal President Erdoğan has said, calling for more concrete steps from the EU and for it to fulfill its part of the migrant deal

Turkey's leading role and constructive efforts in dealing with the refugee crisis, which has troubled EU member states since the Syrian civil war broke out in 2011, was acknowledged by the leadership of the 27-member bloc during a joint press conference after the EU-Turkey Leaders Meeting in the Bulgarian Black Sea resort city of Varna late Monday. President Recep Tayyip Erdoğan told journalists accompanying him on his way back from Varna yesterday that acknowledgment of Turkey's efforts to stop refugees from crossing into Europe, however, has not led to fair sharing of the burden or concrete support for Turkey.

The EU has allocated only $1.85 billion from the first tranche of the two promised installments of 3 billion euros, Erdoğan said, and added that Ankara expects the funds to be allocated without the involvement of third parties directly to Turkish humanitarian institutions such as the Red Crescent and the Disaster and Emergency Management Presidency (AFAD), "Otherwise, some of the money goes to intermediary institutions as commission expenses," Erdoğan said. The president added that concern over avoiding additional expenses was communicated to EU leaders during the meeting and that Turkish officials will follow up on the issue. Also speaking at the joint press conference, European Commission President Jean-Claude Juncker praised the success of the Turkey-EU refugee agreement, saying that it has shown "visible results."

In March 2016, Brussels and Ankara reached an agreement to take stricter measures against human smugglers, discourage irregular migration over the Aegean Sea and improve the conditions of Syrian refugees in Turkey.

Under the EU-Turkey agreement, EU states have to mobilize an additional 3 billion euros in funding by the end of 2018.

European Council President Donald Tusk expressed gratitude for Turkey's support on containing the refugee crisis, saying it is impressive. Tusk thanked the Turkish people for taking in more than 3 million Syrian refugees. "The EU has lent substantial support to improve the livelihood of these refugees, and this evening, we reaffirmed the European Union's unwavering commitment to continue this support," he added.

The summit was held under the leadership of Erdoğan, Tusk and Juncker. Bulgarian Prime Minister Boyko Borisov hosted the summit as chairman of the EU Council.

However, the commission signaled that it would pay the additional 3 billion euros on March 14, but so far has not delivered. The agreement also promised acceleration in Ankara's EU membership process and visa-free travel for Turkish nationals in the Schengen zone, provided Ankara fulfills the criteria set out by Brussels. "We have already spent $31 billion on refugees. We displayed a 7-minute video clip on this to them [Tusk and Juncker]," Erdoğan said, but added that the EU leaders insisted the funds can only be allocated through projects and to meet the criteria Turkey will focus on. Erdoğan said that Turkey's EU Affairs Minister Ömer Çelik will be following up regarding visa-free travel as part of the migrant deal, and added that a committee will be coming to Turkey in April to discuss technical issues. Erdoğan said it was important for the sides to come together in Varna for the future of Turkish-EU relations and that "it is important to continue to keep communicating." "Of course, saying that everything was perfect and all the negativity is left behind would be deceiving ourselves. However, it was important for us to come together at the leadership level and sit at a table sincerely," Erdoğan said. He added that "a mutual understanding to continue dialogue" was also established.

Erdoğan also commented on the recent developments following the terrorist group PKK's withdrawal from Sinjar, Nineveh and the deployment of Iraqi forces in the area.

"Turkey has put forward its determined stance against terrorism with Operation Euphrates Shield and Operation Olive Branch … The Iraqi government knows our sensitivity [towards the issue]."

In mid-2014, the PKK established a foothold in Sinjar, on the pretext that it was protecting the local Yazidi community from Daesh terrorism. The president said that the Iraqi officials have told their Turkish counterparts that an operation against the PKK in the region has been launched, but Turkish intelligence will follow the developments. Erdoğan said Ankara expects Baghdad to remove the PKK from Sinjar. "If they are not removed from Sinjar, which is just 60 kilometers away from the Turkish border, then we will launch a cross-border operation," he said.

Erdoğan said an operation on Manbij or Tal Rifaat in northern Syria against the PKK Syrian affiliated People's Protection Units (YPG) may come at any time, but "these are not plans that can be announced in advance." "If we go, we will go one night suddenly. It would not be right, of course, to give away the road map, agenda, and wake the enemy up," Erdoğan said. After clearing the YPG from Syria's northwestern province of Afrin in Operation Olive Branch conducted with the Free Syrian Army (FSA), locals in other areas controlled by the YPG, including Manbij, have called on the Turkish military to liberate them.

No step back from hydrocarbon exploration

Erdoğan said that there will be no steps back from Turkey's stance on sharing the natural resources in the Eastern Mediterranean between Greek and Turkish Cypriots.

"We say that the rights of Turkish Cypriots, who are equal owners of the island of Cyprus, cannot be considered nonexistent. We say that Turkish Cypriots have rights over the natural gas and oil explored there based on international law," Erdoğan said.

Recently, tensions in the Eastern Mediterranean have escalated due to unilateral moves from Greek Cyprus, which has been commissioning Western energy companies to explore hydrocarbon resources off its shores in an area it declared its exclusive economic zone (EEZ). However, Ankara's reactions and measures in the area have prevented these moves since it considers them to be a violation of the sovereign rights of Turkish Cyprus.

He added that hydrocarbon resources found in the region should be shared equally between Greek and Turkish Cyprus.

He further said that the EU has not been impartial regarding the dispute over natural resources in the region.

Greek Cyprus has been trying to exclude Turkish Cyprus and Turkey, which has been conducting seismic surveys in the area and exercising its legal rights in accordance with international maritime law.

Share on Facebook Share on Twitter
Previous in Diplomacy Ankara does not have to take part in the spat between Western countries... Next in Diplomacy President Recep Tayyip Erdoğan and Qatari Emir Sheikh Tamim bin Hamad...
DAILY SABAH RECOMMENDS