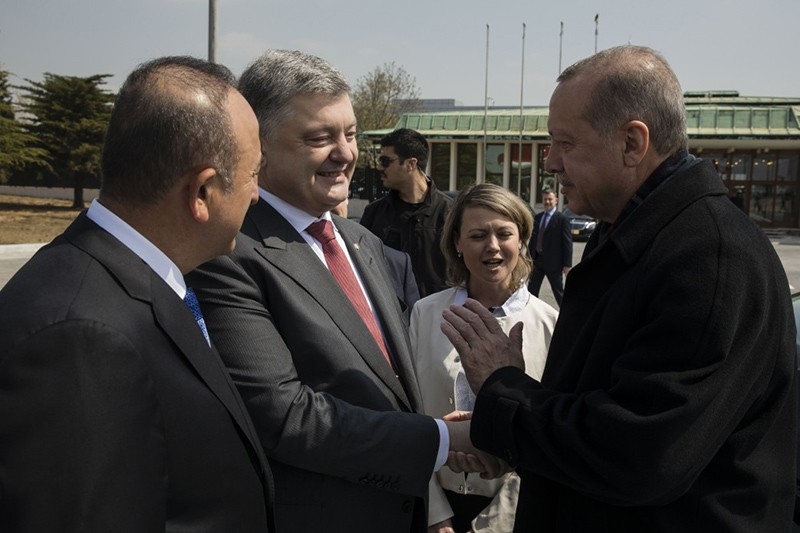 Photo courtesy of the Presidential Administration of Ukraine.
by Daily Sabah Apr 09, 2018 12:00 am

"President Petro Poroshenko informed the Turkish side on the situation in Donbass. … Turkey welcomed the deployment of the U.N. peacekeeping mission in the occupied area of Donbass and stated willingness to take part in this mission," the statement said.

Poroshenko arrived in Istanbul for talks with Erdoğan and Foreign Minister Mevlüt Çavuşoğlu. Erdoğan and Poroshenko discussed bilateral trade and opportunities for the implementation of common energy projects.

Poroshenko also met with Çavuşoğlu in Istanbul, during his one-day visit to Turkey.

"We discussed bilateral relations and regional matters with ally country Ukraine's President Petro Poroshenko and his delegation in Istanbul, where they came for one-day visit," Çavuşoğlu tweeted after the visit.

Ukraine has been wracked by conflict in its east since March 2014, after Russia's annexation of Crimea. The parties to the conflict signed the Minsk cease-fire agreement in February 2015, with mediation from France and Germany, but the fighting continued, claiming more than 10,000 lives, according to the U.N. The U.N. General Assembly has voted to proclaim Russian's annexation of Crimea as illegal. Along with many U.N. countries, the U.S., EU and Turkey do not recognize Crimea as Russian territory.