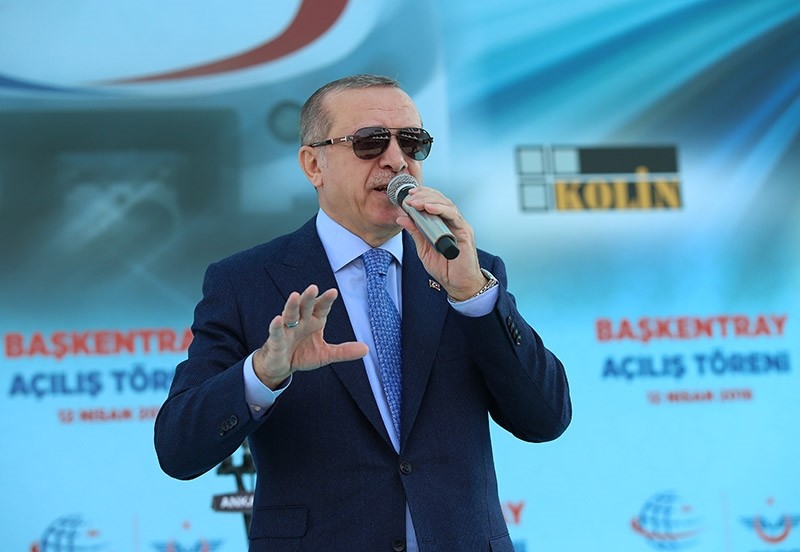 President Recep Tayyip Erdoğan spoke with his Russian counterpart Vladimir Putin on Thursday to discuss the latest developments in Syria and the showdown between the U.S. and Russia, a day after talking to U.S. President Donald Trump on Wednesday.

"I will discuss how we can put an end to this chemical massacre together," Erdoğan said during the inauguration ceremony of the Başkentray suburban line in capital Ankara earlier in the day.

Presidential sources said that the two leaders agreed to maintain the dialogue.

In his remarks in Ankara, Erdoğan criticized both the U.S. and Russia for their sstance in Syria. "Dividing Syria through terror groups is equally wrong as protecting the regime that attacks its own citizens with chemical and conventional weapons," the president said.

Erdoğan also underlined that Turkey does not intend to give up on its alliance with the U.S., its strategic relations with Russia on a range of fields from energy to security or working together with Iran to solve regional problems.

"We are very uncomfortable that some countries, which rely on their military power, are turning Syria into an arm wrestling arena," Erdoğan said.

Trump's posts on Twitter followed a warning from Moscow that the risk of a direct military clash between Russia and the U.S. in Syria "is higher than before", with a Russian envoy saying that U.S. missiles flying over the war-ravaged country would be shot down.

Meanwhile, Turkish Foreign Ministry Spokesman Hami Aksoy said that there are strong suspicions that the chemical attack in the Syrian town of Douma, in the Damascus suburb of eastern Ghouta was carried out by the Assad regime.

According to Aksoy, the attack that killed dozens and affected 500 others constitutes a crime against humanity and the perpetrators need to be punished to prevent similar attacks in the future.

When asked if Turkey will support possible military action by the U.S. against the Assad regime in response to the Douma attack, Aksoy said Turkey "continues to monitor the process closely."

He added that the use of Turkey's air bases during the potential strike against the regime will be discussed with NATO Secretary-General Jens Stoltenberg, who will arrive in Ankara on an official visit Monday.

The spokesman also said the U.S.-drafted United Nations Security Council resolution that would have set up an investigation committee into chemical weapons use in Syria, which was vetoed by Russia on Tuesday, was "a missed opportunity."

The comments come in the wake of Trump's tweet warning Russia to "get ready" for "new and 'smart'" missiles that "will be coming" to Syria.

Several countries led by the U.S., including France and the U.K., are weighing military strikes in response to the Douma chemical attack.

Meanwhile, Erdoğan also touched upon developments in the fight against the PKK terrorist group and its offshoots in Syria, said at least 4,123 terrorists had been neutralized since the launch of Operation Olive Branch in northwestern Syria's Afrin.

On Jan. 20, Turkey launched Operation Olive Branch to clear PKK-linked People's Protection Units (YPG) and remaining Daesh terrorists from Afrin, northwestern Syria. On March 18, Turkish-backed troops liberated Afrin town center, which had been a major hideout for the YPG/PKK since 2012.

Erdoğan said YPG/PKK terrorists will be eliminated "one by one", adding: "We will continue our presence and activities in Syrian territories until they become safe for everyone." He also slammed those who support "bloody Assad regime" and YPG/PKK terrorist organizations.

Erdoğan said that the number of "neutralized" PKK terrorists in northern Iraq reached 337.

Airstrikes on PKK targets in northern Iraq, where the terror group has its main base in the Mt. Qandil region, near the Iranian border, have been carried out regularly since July 2015, when the PKK resumed its armed terror campaign.