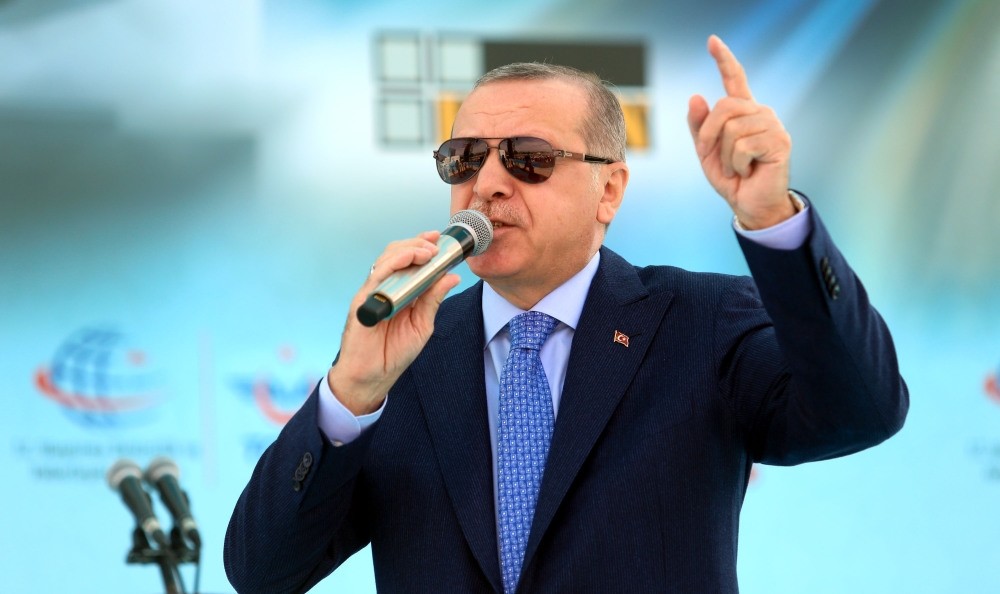 President Erdou011fan said yesterday that due to global powers' desire to show power, the Syrian war has turned into a larger security threat.
by Daily Sabah Apr 13, 2018 12:00 am

The escalation of tensions between the United States and Russia over Syria must not continue further, President Erdoğan said, adding that Ankara does not accept either support for YPG terrorists from allies, or Assad in Syria's future

The escalation of tensions between Russia and the United States over Syria is a matter of concern for Turkey, President Recep Tayyip Erdoğan said yesterday, urging the global powers to stop flexing their military muscle. "The developments in Syria have resulted in a global security crisis. The regime in Syria has a dark record in our eyes. We are uncomfortable with Syria being turned into an arm wrestling match," Erdoğan said in Ankara during an inauguration ceremony.

After the alleged chemical attack by Syria's Bashar Assad regime in Eastern Ghouta and Douma on April 8, which resulted in the deaths of dozens of civilians, the U.S. vowed to strike regime positions. Russia and Iran have been staunch supporters of the Syrian regime. U.S. President Donald Trump on Wednesday warned Russia on Twitter to brace for U.S. military engagement in Syria. He tweeted: "Get ready Russia, because they will be coming, nice and new and 'smart!' You shouldn't be partners with a Gas Killing Animal who kills his people and enjoys it!" Erdoğan spoke with Trump late Wednesday, and spoke with Russian President Vladimir Putin yesterday over the escalating tensions between the two historic rivals and the recent developments in Syria.

"I will speak with them on how we can put an end to chemical massacres together," Erdoğan said ahead of his talks with Putin.

The United Nations Security Council (UNSC) unanimously adopted a resolution on Feb. 24, calling for a month-long cease-fire in Syria, especially in Eastern Ghouta, to allow the delivery of humanitarian aid. Despite the resolution, the regime and its allies early this month launched a major ground offensive backed by Russian air power to capture opposition-held parts of Eastern Ghouta.

Russian Parliament Defense Committee Head Vladimir Shamanov also said late Wednesday that Turkey had served as a mediator between the U.S. and Russia in the Douma chemical attack crisis. "A dialogue between the chiefs of staff of the U.S. and Russia has begun. The connection has been made possible through our counterparts in Turkey," Shamanov added on a talk show on the national Rossiya 1 TV channel.

The U.S. has supported the Syrian Democratic Forces (SDF), which is predominately led by the PKK terrorist group's Syrian affiliate, the Democratic Union Party (PYD) and its armed People's Protection Units (YPG), under the pretext of the fight against Daesh. Russia and Iran, on the other hand, have backed the regime forces, both with ground forces through militia support, and also with air support.

Turkey has backed the Free Syrian Army (FSA), an entity formed of moderate opposition groups, in two major operations conducted in Syria. In Operation Euphrates Shield, the FSA was backed against Daesh terrorists in northern Syria, resulting in a 2,000 kilometer square area cleared of the terrorist group. The Syrian towns of Jarablus, al-Rai, Dabiq and al-Bab were cleared in the operation, which was launched in August 2016 and ended in March 2017. In Operation Olive Branch, the FSA was backed to eliminate the U.S.-backed YPG from the northwestern Afrin province. The offensive was launched on Jan. 20 and the province was cleared of terrorists on March 18. Erdoğan said at least 4,123 terrorists have been killed since the launch of Operation Olive Branch in Afrin.

President Erdoğan reiterated once again that Turkey will remain in Syria until all terrorist elements that pose a threat to its national security are eliminated.

"Daesh or the PYD, we see the presence of even one terrorist along our border as a threat," Erdoğan said.

"We want the games played in Syria and Iraq to be put aside. Due to this play, the world is facing one of the biggest threats of its recent past," the president said. The Turkish president added that those who support the Syrian regime and the PYD are following the wrong policies in Syria.

Turkey has long suffered from the civil war in the neighboring Syria, both from security related concerns and also the influx of nearly 4 millions of refugees into its borders. In the recent U.S.-Russia confrontation, however, taking a side militarily is not expected from Turkey, though it does not agree with Assad remaining in the near future of Syria.

Meanwhile, Turkish Foreign Ministry Spokesman Hami Aksoy said there are strong suspicions that the chemical attack in the Syrian town of Douma, in the Damascus suburb of Eastern Ghouta, was carried out by the Assad regime.

According to Aksoy, the attack that killed dozens and affected 500 others constitutes a crime against humanity and the perpetrators need to be punished to prevent similar attacks in the future.

When asked if Turkey will support possible military action by the U.S. against the Assad regime in response to the Douma attack, Aksoy said Turkey "continues to monitor the process closely."