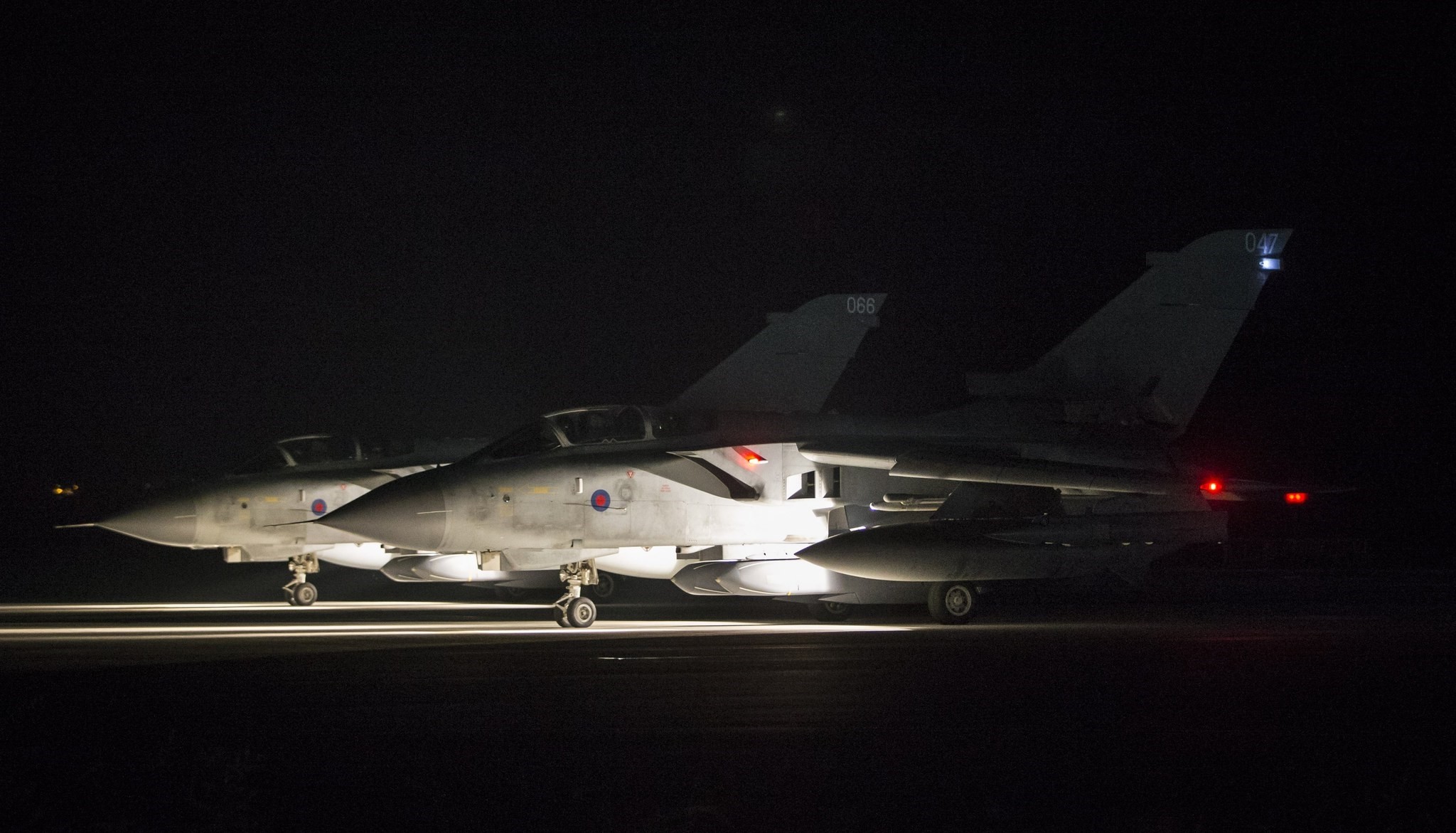 A handout photo by the British Ministry of Defence (MoD) showing two British Royal Air Force (RAF) Tornado taxing before take off at RAF Akrotiri, Cyprus, 14 April 2018 after conducting strikes in support of Operations over the Middle East.
by Daily Sabah with Agencies Apr 14, 2018 12:00 am

It would be "unthinkable" to remain unresponsive toward the Assad regime's chemical attacks in Syria, Ankara said Saturday as the Turkish foreign ministry welcomed the strikes launched by the U.S., the U.K. and France against Assad regime as an "appropriate response."

The statement said Turkey welcomes the operation, "which has eased humanity's conscience in the face of the attack in Douma, largely suspected to have been carried out by the regime."

"Turkey believes that it is of critical importance that such crimes do not go unpunished and that accountability is ensured in order to prevent the recurrence of similar crimes," the foreign ministry said.

Prime Minister Binali Yıldırım said that Turkey considers the overnight operations by the U.S. as "a positive development" but there is more needed to be done for a lasting solution in Syria.

"Those who want a lasting solution in Syria should work harder, take responsibility to end this bloodshed rather than conducting a one-time operation for show, conscience exploitation," Yıldırım said in an address to the AK Party supporters in Istanbul's Esenler district.

Presidential Spokesman Ibrahim Kalın also welcomed the strikes in a statement but said that only focusing on destroying chemical weapons would not be enough to end the instability in the region and the aim should be to end the war in Syria.

"Prevention of massacres through conventional and chemical weapons depends on a political solution in Syria," Kalın said.

Government spokesman and Deputy Prime Minister Bekir Bozdağ said the U.S. did not use the Incirlik Air Base located in Turkey's southern Adana province in the attacks. Bozdağ said that Turkish and American military chiefs of staff held a phone call prior to the operation.

Bozdağ added that political solution is a must in Syria.

The first target was a scientific research center outside of Damascus and the second was a chemical weapons storage facility outside of Homs, he said.

The third target was near to the second and was a chemical weapons storage facility and an important command post, he said.

The current wave of airstrikes, which would result in a "long-term degredation" to Syria's ability to research and produce chemical weapons, was now over, Dunford said.

U.S. officials said there was no indication so far that Syrian air defenses struck attacking Western aircraft or ships.

They characterized this year's strikes as more significant than the one waged last year, saying double the number of weapons were used this time.

"We were very precise and proportionate," Mattis said. "But at the same time, it was a heavy strike."

At the time, the Pentagon claimed that a fifth of Syria's operational aircraft was either damaged or destroyed.