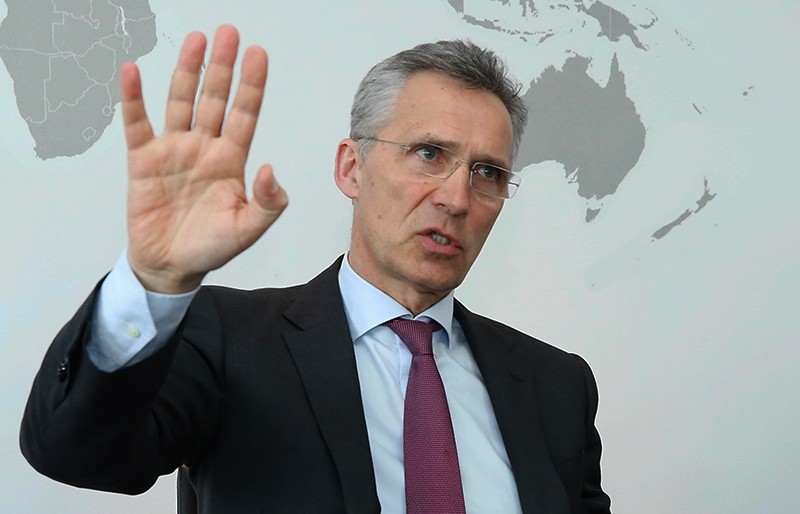 NATO Secretary General Jens Stoltenberg drew attention to already existing NATO presence in Turkey and called on all allies to provide more support to the country.

"We also provide political support, because Turkey is the NATO ally that has suffered the most from terrorist attacks. NATO immediately condemned the coup attempt that targeted Turkey's democratic institutions," the secretary-general said.

Stoltenberg spoke to Anadolu Agency (AA) at the NATO headquarters in Brussels ahead of his official visit to Turkey on April 16.

The NATO chief said the aim of his trip to Ankara is to "to prepare for the upcoming [NATO] summit in Brussels in July," and that he is expected to meet with President Recep Tayyip Erdoğan, Defense Minister Nurettin Canikli, and also Foreign Minister Mevlüt Çavuşoğlu. Stoltenberg said he highly values the visit to Turkey, as he sees the country it is "a highly valued and key ally for many reasons, not just for its strategic location." He added that during the visit he will "discuss the preparations for the important summit where we will address issues like how we continue to adapt NATO to a more demanding security environment."

He said that NATO functions with the solidarity principle "one for all and all for one" and added: "We have deployed missile batteries that are augmenting the missile air defenses of Turkey. We have Italy and Spain deploying Patriot batteries and also SAMP-T batteries, and we conduct surveillance flights with our AWACS planes over Turkey. We have also increased our naval presence in the eastern Mediterranean. There are also other NATO activities, including infrastructure, exercises, and we have our land command in Izmir." Stoltenberg said, while these activities and also political support is given by NATO, Turkey must still get more support from the allies "because Turkey is the NATO ally that has suffered the most from terrorist attacks."

Stoltenberg said that a training mission will be established in Iraq to provide training to Iraqi soldiers and "help to build military academies and schools to help Iraqis stabilize their own country, fight terrorism," while he added it is NATO's desire for Turkey to also play a key role in the program.

Turkey has been fighting Daesh, the PKK, and the PKK's Syrian affiliate, the People's Protection Units (YPG), terrorist groups simultaneously. However, the Turkish government has criticized NATO allies, particularly the U.S., for a lack of support in the fight against terrorism. The U.S. supports the YPG in Syria under the pretext of fight against Daesh, which has strained ties between Ankara and Washington.

"We're aware that there are some challenges related to the situation in northern Syria and around Afrin. NATO has been a platform for direct dialogue between Turkey and the U.S. We recognize Turkey's legitimate security concerns, which we expect to be addressed in a proportionate and measured way," NATO chief said.

"We all understand that Turkey has to address these threats. We welcome that Turkey has been transparent and briefed NATO several times on the operation in Afrin, both the military operations and the humanitarian assistance."

Stoltenberg reiterated the alliance's position regarding Turkey's purchase of S-400 missile defense systems, saying it was "a national decision." He also welcomed Turkey's agreement with Italy and France, in the EUROSAM consortium to start to develop missile and air defense systems as well as reports of talks between Ankara and Washington on the sale of Patriot batteries.

Stoltenberg's visit to Ankara is expected to focus on a wide range of issues, including Turkish-led Operation Olive Branch, the fight against terrorism and Syria.