Turkey says strikes on Assad 'well-deserved,' mediates to lessen tension between US, Russia 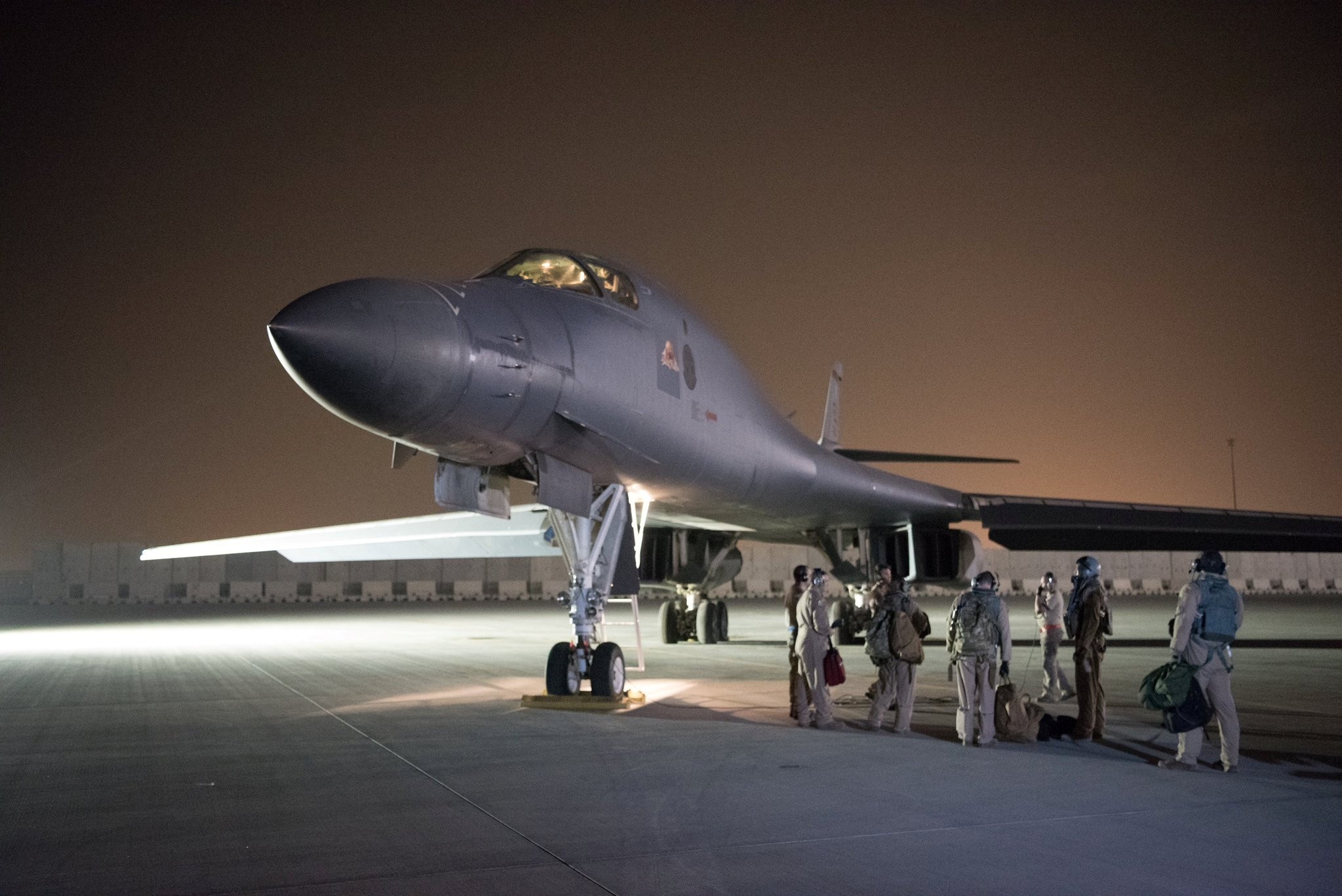 A U.S. Air Force B-1B Lancer and crew, being deployed to launch a strike as part of the multinational response to Syriau2019s use of chemical weapons, is seen at Al Udeid Air Base, Doha, Qatar, April 14.
by Daily Sabah Apr 16, 2018 12:00 am

The attacks against the Syrian regime for use of banned chemical weapons on civilians are justified, Ankara said after the U.S.-led airstrikes, while calling for a calming of tensions to avoid further instability

The U.S.-led airstrikes on Bashar Assad's military facilities in Syria, believed to be used for chemical attacks, were positive steps taken against the use of chemical weapons, Ankara has said, while urging the de-escalation of tensions between Washington and Moscow. On Saturday, President Recep Tayyip Erdoğan held several phone calls with the leaders of France, the U.K. and Russia, continuing the diplomatic efforts Ankara has been exerting to calm tensions between the U.S. and Russia.

Presidential sources said during the calls, Erdoğan reiterated Turkey's position on the use of chemical weapons, condemning the attacks, as well as the use of conventional weapons, and highlighting the need for an immediate political solution. The U.S., the U.K. and France hit Syria with airstrikes early on Saturday in response to a chemical attack that killed more than 70 civilians last week in Eastern Ghouta and Douma by the Assad regime, in the biggest intervention by Western powers against the regime. Erdoğan highlighted the importance of working together with France and Russia to resolve the Syrian crisis and the importance of not escalating tensions in Syria, presidential sources said, referring to Erdoğan's phone conversation with Emmanuel Macron and Vladimir Putin.

French President Emmanuel Macron shared information with Erdoğan about the airstrikes on Syria. The Turkish president underlined that the Assad regime's attacks with both chemical and conventional weapons should end, while stressing that a political solution is necessary to bring peace in the country. 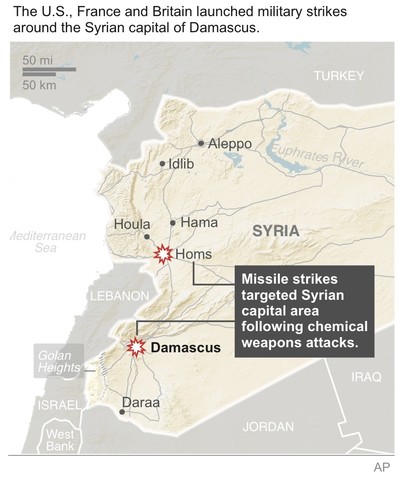 In their phone conversation, Erdoğan and Putin resolved to continue joint efforts to find a political solution to the Syrian crisis and agreed to stay in close contact on bilateral and regional issues. Earlier, the Turkish president also spoke with British Premier Theresa May.

Prime Minister Binali Yıldırım said yesterday that Turkey supports the airstrikes; however, the move was a belated action. Speaking at the Sixth Ordinary Congress of the ruling Justice and Development Party (AK Party) in Istanbul's Tuzla district, Yıldırım said: "It is a late response to the regime and vile murderers, who caused the atrocity in the region."

Ankara has underlined that both the U.S. and Russia follow incorrect strategies in Syria, as Washington supports the PKK's Syrian affiliate People's Protection Units (YPG) in the fight against Daesh and Moscow supports Bashar Assad, whose regime has killed hundreds of thousands of its people.

Regime forces are strongly supported by the Russian military as well as forces loyal to Iran. After the attacks, the Kremlin issued a statement condemning the airstrikes, saying, "The current escalation around Syria is destructive for the entire system of international relations." The statement added: "History will set things right, and Washington already bears the heavy responsibility for the bloody outrage in Yugoslavia, Iraq and Libya." Russia had also urged the United Nations Security Council (UNSC) to condemn the attacks; however, the motion was rejected.

Iranian Supreme leader Ayatollah Seyed Ali Khamenei sent a tweet on Saturday, condemning the air strikes. "This morning's attack on #Syria is a crime. I firmly declare that the Presidents of U.S. and France and British PM committed a major crime. They will gain no benefit; just as they did not while in Iraq, Syria & Afghanistan, over the past years, committing the same criminal acts," he tweeted.

Supporting the Assad regime since the early stages of the nearly 8-year-old Syrian war, despite the regime's brutality on civilians, Iran has been blamed of attempting to increase its influence in the region, including in the conflicts in Syria and Yemen, due to religious and sectarian motivations.

The UNSC unanimously adopted a resolution on Feb. 24, calling for a month-long ceasefire in Syria, including Eastern Ghouta, to allow the delivery of humanitarian aid. Despite the resolution, the regime and its allies earlier this month launched a major ground offensive backed by Russian air power to capture opposition-held parts of Eastern Ghouta.

Turkey is not taking sides between Russia and the U.S., Foreign Minister Mevlüt Çavuşoğlu said on Saturday, referring to escalated tensions between U.S. President Donald Trump and the Kremlin.

Ahead of strikes, Trump had warned Russia via Twitter to brace for U.S. military engagement in Syria. He tweeted: "Get ready Russia, because they will be coming, nice and new and 'smart!' You shouldn't be partners with a Gas Killing Animal who kills his people and enjoys it!" During the airstrikes on Saturday, Russian military bases in Syria were not hit, reports said. Strikes carried out on Syria targeted three facilities associated with the government's chemical weapons program, U.S. Marine General Joseph Dunford told reporters in Washington on Saturday. The first target was a scientific research center outside of Damascus and the second was a chemical weapons storage facility outside of Homs, he said. The third target was near to the second and was a chemical weapons storage facility and an important command post, he added.

"We are not making a choice between Russia and America. We are also not making a choice between the [Bashar Assad] regime and America, France and Britain," Çavuşoğlu told a crowd during the 5th ordinary congress of the ruling AK Party in Antalya's Alanya district. "Our goal is to bring a political solution to Syria, bring back peace and guarantee Syria's stability, border and territorial unity; we are sincere on this issue," he said.

After the Saturday's strikes, acting U.S. Secretary of State John Sullivan briefed Turkey's Foreign Undersecretary Ümit Yalçın over the phone on Sunday on the latest developments in Syria.

Turkey was also informed of the forthcoming strikes, ruling AK Party spokesperson Mahir Ünal said in a televised interview on CNN Türk on Saturday, adding that Turkey was already expecting such reaction following the statements coming from its allies." We see this attack as a sanction against the use of chemical weapons and a stern warning to Assad against attacking his own people with chemicals," he added.

Government spokesman and Deputy Prime Minister Bekir Bozdağ also said the U.S. did not use İncirlik Air Base located in southern Adana province in the attacks.

In a statement released after the attacks were carried out, the Turkish Foreign Ministry described the air strikes against Assad's bases as an "appropriate" response. "Turkey believes that it is of critical importance that such crimes do not go unpunished and that accountability is ensured to prevent the recurrence of similar crimes," the statement said.