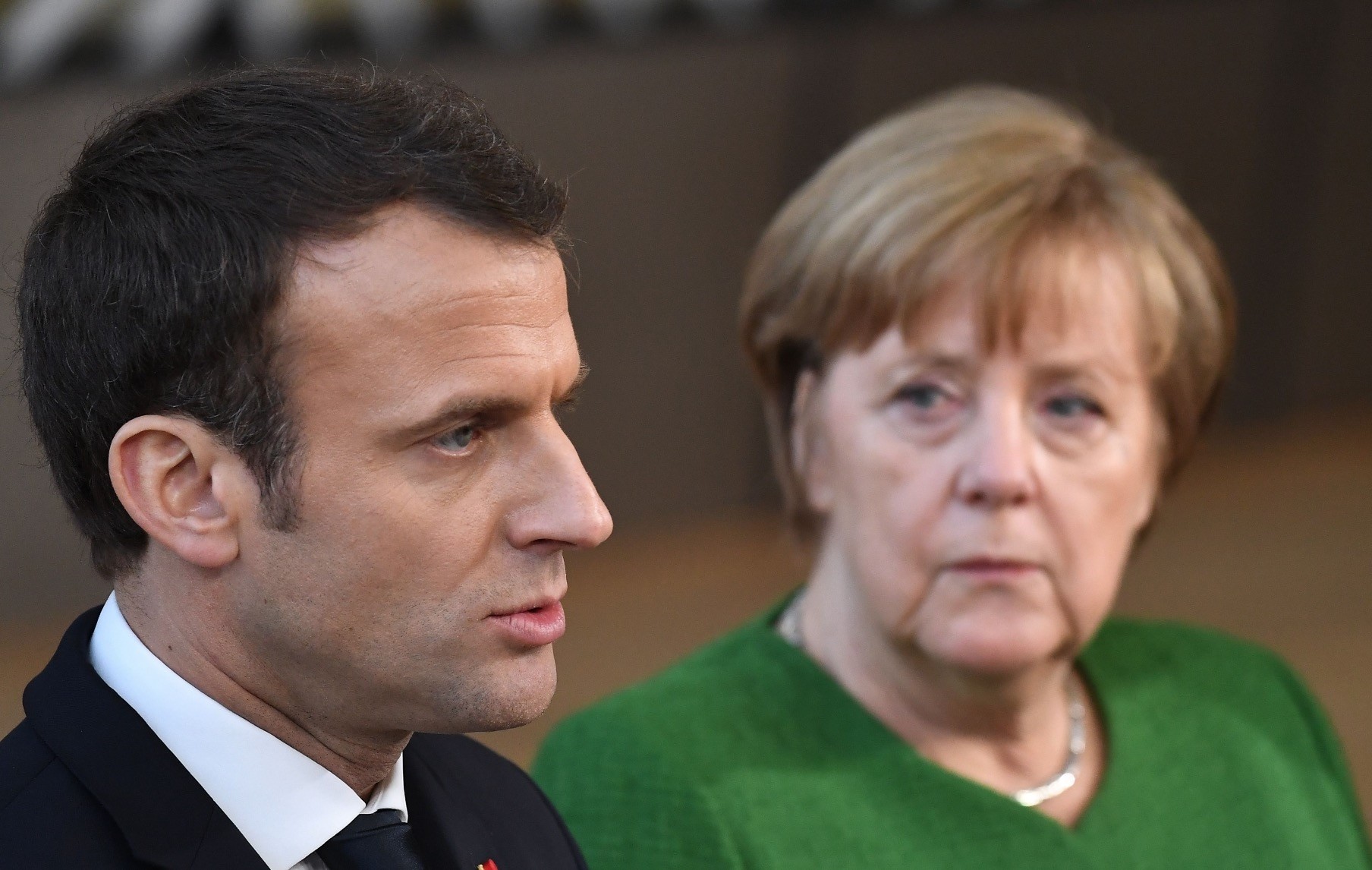 France President Macron (L) speaks to journalists next to German Chancellor Angela Merkel as they arrive for an informal meeting of the 27 EU heads of state and government at European Council headquarters, Brussels, Feb. 23.
by Daily Sabah Apr 18, 2018 12:00 am

French President Macron's remarks, claiming that his recent Syria policy moves have led to a split between Russia and Turkey split, have received harsh criticism from Turkish officials

In an interview on French television last week, Macron suggested that airstrikes on regime targets over the weekend had succeeded in engineering a split in the Russian-Turkish alliance.

"With these strikes and this intervention, we separated the Russians and the Turks on this issue. ... The Turks condemned the chemical strike and supported the operation that we conducted," he told BFM TV in an interview. Erdoğan on Saturday welcomed the strikes, which he called appropriate, and strongly condemned the alleged chemical attack.

Erdoğan said Turkey has never been and will never be fully on the side of any actors in Syria, but would work with everyone it considers appropriate.

"It is Turkey that has the most right to carry out activity on the ground in Syria. …There is a Republic of Turkey that is determined to ensure the security here. There is also the FSA [Free Syrian Army]. Turkey is never absolutely with or against anyone on Syria," Erdoğan said, adding that Turkey makes moves with actors as necessary.

Meanwhile, Erdoğan and Iranian President Hassan Rouhani agreed yesterday in a phone call to maintain cooperation between Turkey, Iran and Russia for a political solution to the Syrian civil war. A presidential source said that Erdoğan also told Rouhani that actions to increase tensions in the region should be avoided after U.S., British and French forces carried out airstrikes on Syrian regime targets over the weekend.

Foreign Minister Mevlüt Çavuşoğlu said on Monday that Macron was mistaken in his assessment and said that Ankara "expected statements befitting a president" and that Macron should express himself "more seriously."

Çavuşoğlu also added that Turkey's ties with Russia are too strong for Macron to break. A statement also came from Russia that rejected Macron's claim. "No, these strikes did not split us. It's no secret that the positions of Moscow and Ankara differ on a number of issues. At the same time, this does not prevent us from continuing to exchange views, to continue discussing this difference in positions," Kremlin spokesman Dmitriy Peskov said on Monday.

Turkey and Russia previously brokered the Astana talks for a cease-fire and the transition for a political solution in Syria. Last year, Turkey, Iran and Russia agreed in Astana to establish de-escalation zones in the northern province of Idlib and parts of neighboring Latakia, Hama and Aleppo. Under the Astana agreement, Turkey is to gradually establish 12 observation points from Idlib's north to south to monitor and sustain the current cease-fire agreement for the de-escalation zones, deliver humanitarian aid and ensure the secure return of displaced people.

Ankara has also repeatedly stressed that the Astana process is not an alternative but a complementary effort to the Geneva peace talks.

"We never said the Astana process for Syria is an alternative to Geneva. …We said it is complementary," Erdoğan said during a meeting of the trilateral establishment in Ankara on April 4

The U.N.-brokered Geneva talks, which began in 2014 to end the war by bringing conflicting sides together, have thus far failed to yield lasting results and hope for a major breakthrough following the process remains bleak.

Also commenting on areas liberated by Turkey in northern Syria with Operations Euphrates Shield and Olive Branch, Erdoğan said more than 160,000 Syrians have been able to return home thanks to Turkey. "But it is not enough," he said, adding that there will be even more homecomings in Afrin.

On March 18, Ankara announced that Afrin was cleared of the PKK-affiliated People's Protection Units (YPG), but the operation still continues as the armed forces continue to clear mines and other explosives planted by the YPG before they fled villages in rural parts of the region as well as in the city center. In 2016 and 2017, the Syrian towns of Jarablus, al-Bab, al-Rai and Dabiq were cleared of Daesh, enabling locals who had sought refuge in Turkey to safely return home. After Daesh was driven from the area and explosives were removed from the region, Turkey rebuilt previously Daesh-held towns and life has returned to normal.