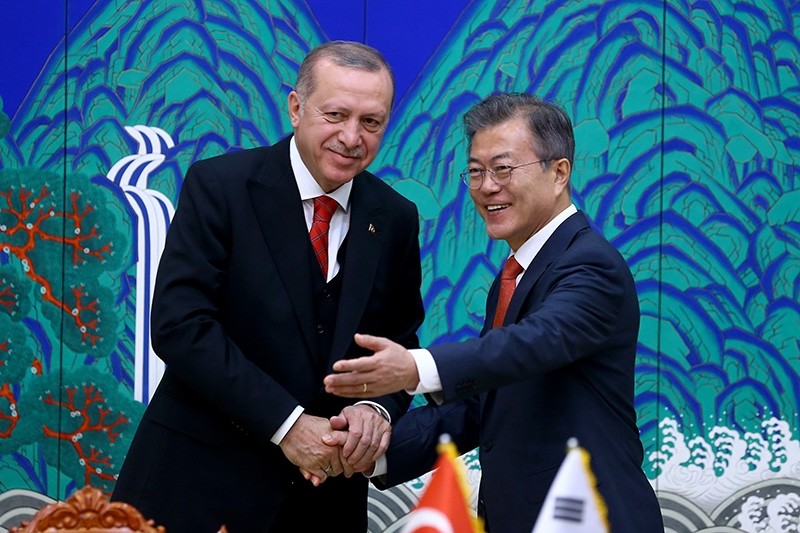 Erdoğan's two-day trip makes him Turkey's first leader to pay a state visit to the South since the countries upgraded bilateral relations to the level of a strategic partnership in 2012, a year before signing a free trade agreement.

"The two leaders noted the South Korea-Turkey free trade agreement (FTA) has become an important foundation of mutually beneficial economic cooperation by ensuring balanced growth of trade between the two countries and agreed to quickly implement an agreement on the service industry and the investment sector within the framework of the South Korea-Turkey FTA," a joint press release stated following Wednesday's summit.

The Turkish president also met National Assembly Speaker Chung Sye-kyun and termed the strong ties between Turkey and Korea as a "historical fact."

He announced that four agreements had been signed between Turkey and South Korea.

"We discussed what we could do in the area of the defense industry and many other areas in the future during our bilateral meeting and delegation meeting."

He added: "It will be a distinguished pride for us to have Korea included in our Canal Istanbul Project."

The Canal Istanbul Project is an artificial sea-level waterway that will connect the Black Sea with the Sea of Marmara.

"I believe that enhancing bilateral relations and communication between the parliaments will be greatly beneficial."

Relations between Turkey and South Korea stretch back to the 1950s, when they forged a brotherhood during the Korean War. During the war, Turkish forces served under the U.N. Command, and 774 Turkish soldiers were martyred.

But the primary focus of Erdoğan's trip appears to be economic cooperation.

"President Moon and President Erdoğan will review the development of the countries' strategic partnership and hold discussions on ways to further increase their mutual cooperation in trade and other areas," Seoul's presidential vice spokesperson Ko Min-jung was quoted as saying by Yonhap News Agency.

The Korea Chamber of Commerce and Industries hosted business leaders at an event in Seoul Wednesday morning for the 150-member Turkish delegation to develop contacts.

"The role of companies is becoming more important to cement economic relations between the two nations," South Korean Trade Minister Paik Un-gyu said during opening remarks, also promising government support in that regard.

"The role of companies is becoming more important to cement economic relations between the two nations," Trade Minister Paik Un-gyu said during opening remarks, also promising the government's support in that regard.

Bilateral trade volume rose over 17 percent between 2012 and 2017, reaching US$6.12 billion based on Seoul's official data.

Erdoğan is set to see more of Moon beyond Wednesday evening's state dinner, as they agreed to expand their MIKTA partnership -- also including Mexico, Indonesia and Australia -- from a forum of foreign ministers to one of leaders.