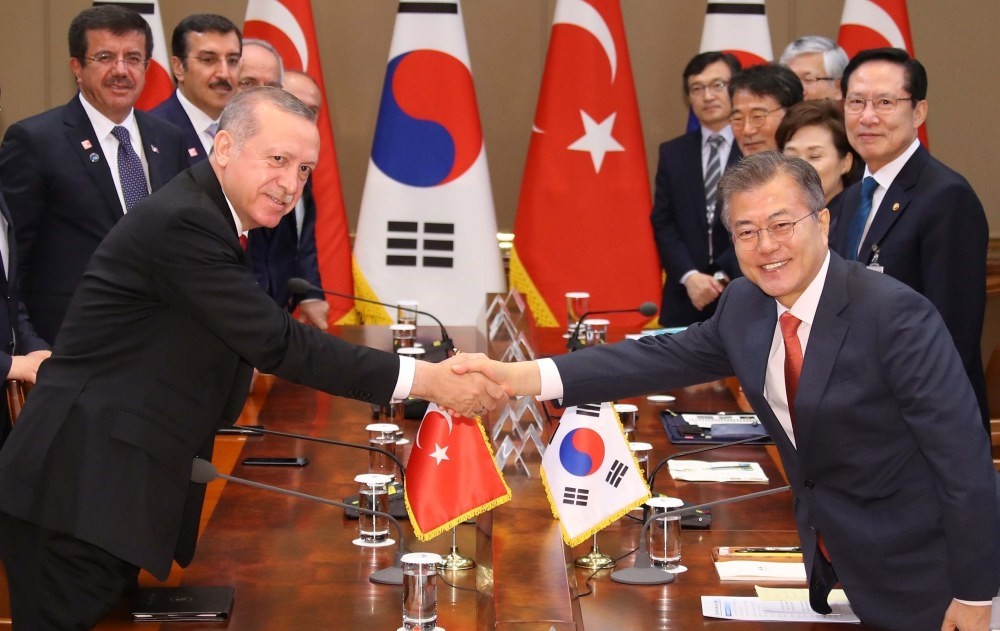 A joint statement released yesterday said that the two leaders have agreed to "cooperate on global issues, such as world peace and stability, terrorism, and refugee crisis."

The statement added that the two leaders have discussed the issues related to the Middle East, particularly Palestine and Syria, and agreed that the international community should exert efforts to find a permanent political solution to the regional crisis.

During Erdoğan's visit, Moon also highlighted Turkey's efforts toward the Syrian refugees and diplomatic work for a political solution in Syria.

Erdoğan's two-day trip makes him the first Turkish leader to pay a state visit to South Korea since the two countries upgraded bilateral relations to the level of a strategic partnership in 2012, a year before signing a free trade agreement.

The Turkish president also met National Assembly Speaker Chung Sye-kyun and termed the strong ties between Turkey and Korea as a "historical fact."

He announced that four agreements had been signed between Turkey and South Korea. "We discussed what we could do in the defense industry and other areas in the future in our bilateral and delegation meetings," he said.

Relations between Turkey and South Korea stretch back to the 1950s when they forged a brotherly relation during the Korean War, when Turkish forces served under the United Nations Command. Some 774 Turkish soldiers were killed in the war.

Turkey has also planned to establish a Yunus Emre Turkish Cultural Institute in Seoul. A Korean Culture Center was also established in Ankara in 2011.

The two leaders also expressed pleasure that the two center will facilitate exchange in the areas of culture, tourism and education.

During his visit, Erdoğan visited the Seoul National Cemetery, where he put on white gloves and burned incense in a ceremony. The Turkish president also signed the journal at the cemetery.

The primary focus during Erdoğan's visit was to increase bilateral trade and economic activity. Erdoğan also invited Moon to visit Turkey. The invitation was accepted by the South Korean president.