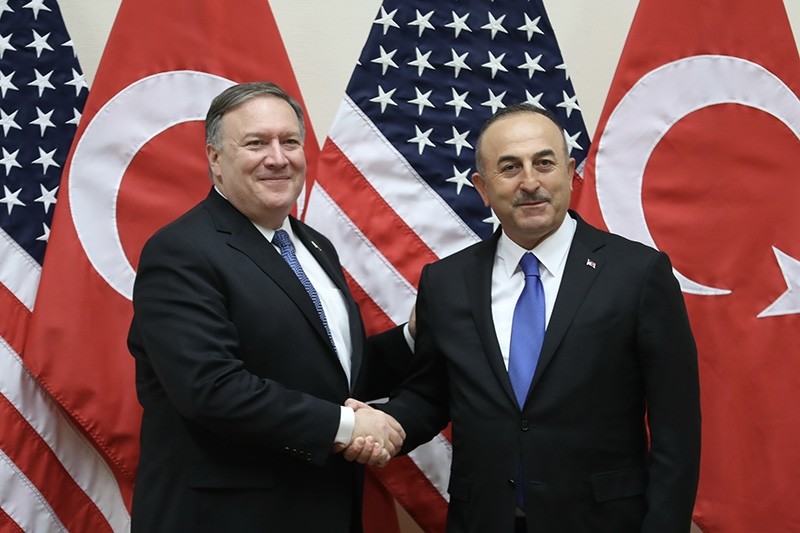 Speaking at a news conference, Aksoy said that the date of the meeting has not been set yet.

Regarding the working groups established between Ankara and Washington to contribute to normalizing bilateral relations, Aksoy said that the group responsible for consular affairs met before, adding that the other one would also soon gather in Turkey.

Çavuşoğlu and U.S. Secretary of State Pompeo held a bilateral meeting last month on the sidelines of a gathering of top diplomats of NATO allies to discuss the situation in Afghanistan, Russia, and NATO.

According to diplomatic sources, Pompeo reaffirmed the importance of the U.S.-NATO alliance and holding bilateral talks.

The U.S. State Department released a statement after the meeting in Brussels, saying that Çavuşoğlu and Pompeo "reaffirmed their support for the established bilateral process to find a common way forward on Manbij and also discussed the United States' commitment to support Turkey's national security concerns."

The two officials also discussed the current security environment and review preparations for the upcoming NATO summit to be held in Brussels on July 11 and 12.

During former U.S. Secretary of State Rex Tillerson's visit to Turkey on Feb. 15-16, three working groups were established between the two countries to overcome issues related to Syria, the Gülenist Terror Group (FETÖ) and Iraq. Following the meeting Turkey and the U.S. agreed to resolve issues that have been undermining the bilateral ties between the two countries.

Washington's efforts to normalize ties with Ankara in northern Syria have increased since Turkey launched Operation Olive Branch with the Free Syrian Army (FSA on Jan. 20 to clear the PKK-affiliated People's Protection Units (YPG) from Afrin. However, the U.S. has also often criticized the operation with the allegation that it distracts from the fight against Daesh in southeastern Syria.

Turkey has called on U.S. authorities to take concrete steps for ending the YPG presence in the northern Syrian town of Manbij, insisting that the Manbij city council should be run by groups in line with a ratio of representation by paying regard to past census results from the city before demographic changes in the area imposed by the YPG.

In relation to the Cyprus issue, Aksoy underlined that the negotiations, which have been ongoing for 50 years, have evolved into a vicious cycle.

"In this process, we have tried to take positive steps, however due to the Greek side's mindset we could not yield results," Aksoy said, and added that the Crans-Montana talks had also failed as the Greek side does not aim to build a partnership based on shared political power.

Aksoy underlined that Foreign Minister Mevlüt Çavuşoğlu evaluated the situation with authorities during his visit to the Turkish Republic of Northern Cyprus (TRNC) on April 20-21.

Commenting on the future of the Cyprus issue, Aksoy pointed out that unless there is a significant change in the mindset of the Greek side, the Turkish side is not willing to be part of the same process.

"We believe that a new way needs to be tried," Aksoy stated.

The island of Cyprus has been divided since 1974 when a Greek Cypriot coup took place after decades of violence against the island's Turkish community resulting in Ankara's intervention as a guarantor power.