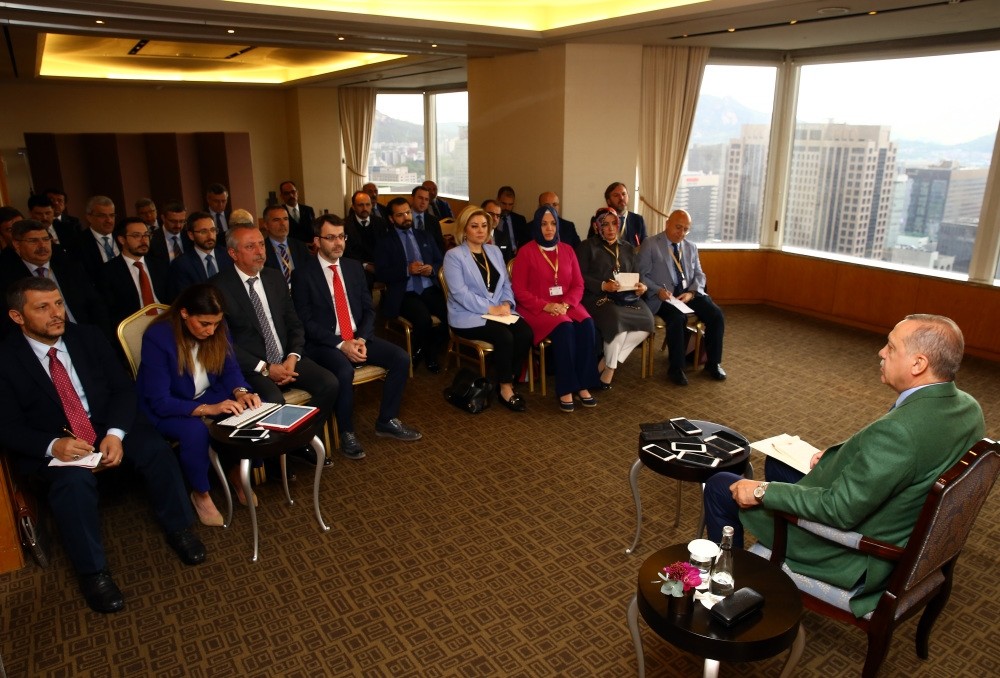 President Erdou011fan talks to the members of the Turkish press during his two-day state visit to South Korea yesterday.
by Meryem Ilayda Atlas May 04, 2018 12:00 am

AK Party will meet European Turks as part of the its campaign for the upcoming June 24 elections, President Recep Tayyip Erdoğan said as he criticized some EU states for banning campaign activities of Turkish politicians

The ruling Justice and Development Party (AK Party) will organize a large election rally in Bosnia-Herzegovina for its European Turkish supporters, President Recep Tayyip Erdoğan told reporters accompanying him during his official visit to South Korea. Erdoğan criticized the major European countries' decisions to not allow the election rallies of Turkish politicians, saying their attitude toward Turkish "politicians and citizens is not democratic." He underlined that the Turkish politicians faced similar obstacles ahead of the June 7 and Nov. 1, 2015 elections as well as before in the April 16, 2017 referendum, causing tension between Ankara and some European Union states.

"We have decided to meet our citizens in Bosnia-Herzegovina," to overcome the obstacles created by the EU states, he said and added that a crowd of nearly 10,000 people is expected to participate in their election rally, which the president will also attend. Some EU states have previously banned Turkish politicians from holding election campaigns in their countries, despite the presence of large electoral bases for Turkish parties. Ankara has criticized the decision, saying it is against the democratic rights of European Turks living in EU countries. Earlier in April, German Foreign Minister Heiko Maas announced that his country will not allow Turkish politicians to carry out election campaign rallies ahead of the upcoming June 24 elections.

Various German towns and local administrations imposed similar bans on "Yes" campaign meetings, including those of the Union of European Turkish Democrats (UETD), which is registered in Germany.

"We did not hold back from calling European leaders and congratulating them when they held elections. Because we want to open a new page and want the ties to be better," Erdoğan added.

Similarly, Austria and the Netherlands have also said that they would also not allow Turkish politicians to carry out election campaigns.

Meanwhile, AK Party officials accused the EU states of being biased against their party, as some opposition Turkish parties were able to hold meetings, despite the EU states' bans on carrying out election campaigns.

Opposition's alliance will not bring them victory

Erdoğan commented on the alliance formed by the opposition secularist Republican People's Party (CHP), the far-right Good Party (İP), the conservative Felicity Party (SP) and the Democrat Party (DP), saying the people will make the right decision and "not fall for the games" of the opposition.

"I do not believe that they will achieve the result they expect to achieve in Parliament," Erdoğan said, referring to the opposition's alliance.

He added that the current survey indicated a landslide victory for the People's Alliance, formed by the AK Party and the Nationalist Movement Party (MHP).

Erdoğan also said he will not comment on the talks over former President Abdullah Gül's possible candidacy for the presidential elections. Gül, who was predicted to be the joint candidate for the opposition, said last weekend that he will not run for president.

"I believe our people will give us the needed support," President Erdoğan added.

"These types of expressions are not suitable for a statesman," he said, referring to remarks made by Macron after the U.S. airstrike on Syria last month, which he said had caused damaged in relations between Turkey and Russia.

Ankara supported the airstrikes against the Bashar Assad regime, backed by Russia and Iran, for the alleged use of chemical weapons in Syria's Douma and eastern Ghouta. Macron had also said that the EU should keep the Balkans away from Russian and Turkish influence.

"Just like we have good relations with Western countries, we also have good ties with Russia. No one can damage Turkey's ties with another country," he said.

The president also said that given the strong historical ties with the Balkan countries, Turkey has good relations in the region and that "Macron should not make such incorrect remarks."

During his four-day trip abroad, Erdoğan headed to Uzbekistan before his visit to South Korea. In both countries, the visits focused mainly on improving bilateral trade and economic relations while strengthening exchanges in the cultural and political fields of the two countries.

Erdoğan said 24 bilateral agreements were signed in Uzbekistan's Tashkent where Erdoğan and his delegation received a warm welcome by Uzbek President Shavkat Mirziyoyev.

The agreements with Uzbekistan include deals in energy, economy and trade, which makes Turkey the first country to ink this many deals with Uzbekistan, while the two countries also agreed on 50 new investment projects with an estimated cost of more than $3 billion.

In 2017, trade volume between Turkey and Uzbekistan sat at $1.7 billion. Erdoğan said during his visit that the bilateral trade volume should surpass $5.5 billion.

In South Korea, Erdoğan was welcomed by South Korean President Moon Jae-in in Seoul. He added that Turkey aims to increase bilateral trade to more than $10 million from the approximate current amount of $7.5 billion. The president said four agreements were signed with South Korea.

The president also said Turkey and South Korea are discussing the establishment of cooperation and agreements in the defense industry and that South Korean counterparts have been invited to Turkey to further discuss the details about possible cooperation.

Commenting on a recent announcement by Standard & Poor on Turkey's foreign currency credit rating, which was lowered from "BB" to "BB-", Erdoğan said the S&P's decision was a political one and does not reflect economic realities.

"S&P's rating does not mean anything for Turkey," he said.