US will lose after opting out of Iran nuclear deal, Erdoğan says 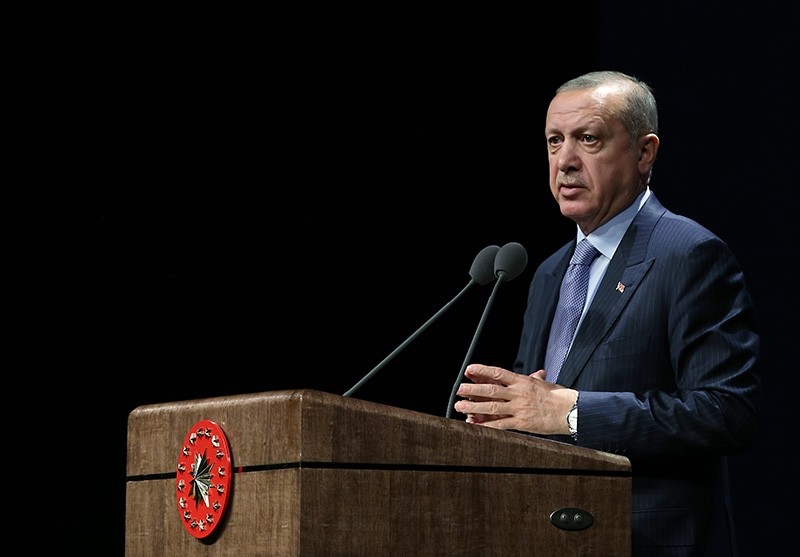 The U.S. will be on the losing side in terms of the Iran nuclear deal because it did not adhere to the agreement, President Recep Tayyip Erdoğan said Wednesday, as he criticized U.S. President Donald Trump's decision to withdraw from the agreement.

The deal was made "possible after years of negativity, in the end raising hope all around the globe. At the drop of a hat, turning this deal around and retreating from this deal, possibly is not just going to impact the region but also the entire world," Erdoğan told CNN International in an interview.

The economy of the whole world is at stake, he warned, adding: "The U.S. might gain some certain positivities out of the withdrawal from this or the rising oil prices, but many of the countries in poverty will even be hit harder and deeper."

"We don't need new crises in the region," he added.

Asked if Trump's action could lead to a geopolitical war, Erdoğan said: "That's not what we would wish to see of course, this is not something would like to expect. However in my view, the U.S. will be the ones to lose. Iran will never compromise on this agreement and will abide by this agreement till the end."

One must "respect an agreement you have signed," he reiterated.

Bucking pressure from the U.S.' closest European allies, and most of the U.S. political establishment, Trump on Tuesday pulled the U.S. out of the landmark nuclear agreement that world powers struck in 2015 with Iran.

Trump opted not to extend sanctions relief for Iran, vowing instead to re-impose nuclear-related economic penalties.

The 2015 deal placed unprecedented restrictions on Iran's nuclear program in exchange for billions of dollars in relief from international sanctions, but Trump has railed against it since his presidential campaign, repeatedly calling it the "worst deal" he has ever seen.

All of the U.S.' negotiating partners -- the U.K., France, Germany, Russia, China and the EU -- agree that maintaining the accord is the best way to reign in Iran's nuclear program.

Erdoğan also commented on the planned formal opening of the U.S. embassy in Jerusalem, calling the move a "huge mistake."

He said that the U.S. had "nothing to gain," urging Trump to reverse his decision. "East Jerusalem is the capital city of Palestine," Erdoğan stressed.

Pointing to the fact that the U.S. was isolating itself from the international community due to its controversial stance, the president warned that "the United States is losing true friends right now."

Ankara also has a sometimes troubled relationship with Tehran, but the two sides have been working closely -- along with Russia -- over the last year in a bid to bring peace to Syria.

Turkish-American relations are already strained over U.S. backing for PKK-linked People's Protection Units (YPG) in Syria, as well as the jailing of an American pastor in Turkey for ties to the Gülenist Terror Group (FETÖ) and the PKK.

Erdoğan said that the U.S. was arming the YPG "free of charge and criticized his U.S. counterpart for rejecting Turkey as a "strategic partner" in the fight against terrorism in Syria.

"Let's fight together in Raqqa, was what I said to President Trump personally," he said. "And stop supporting PYD and YPG. Don't walk hand in hand with these terrorists or that'll be a mistake. But unfortunately, the US preferred moving with them and set aside Turkey."

Regarding the ongoing trial of North Carolina pastor Andrew Brunson, Erdoğan said that the U.S. was politicizing the judicial matter and underlined that he was "not a hostage."

The president also reiterated Turkey's demand to extradite FETÖ leader Fetullah Gülen, who is beng "harbored" in the U.S.

"And we demand his extradition, and he's not being extradited to us. But there is a Pastor Brunson here, who is being currently prosecuted -- and he's allegedly associated with terrorist organizations. And you're asking for him?"

"These two incidents are completely independent from one another," he said.