Growing reactions against US for withdrawing from nuclear deal 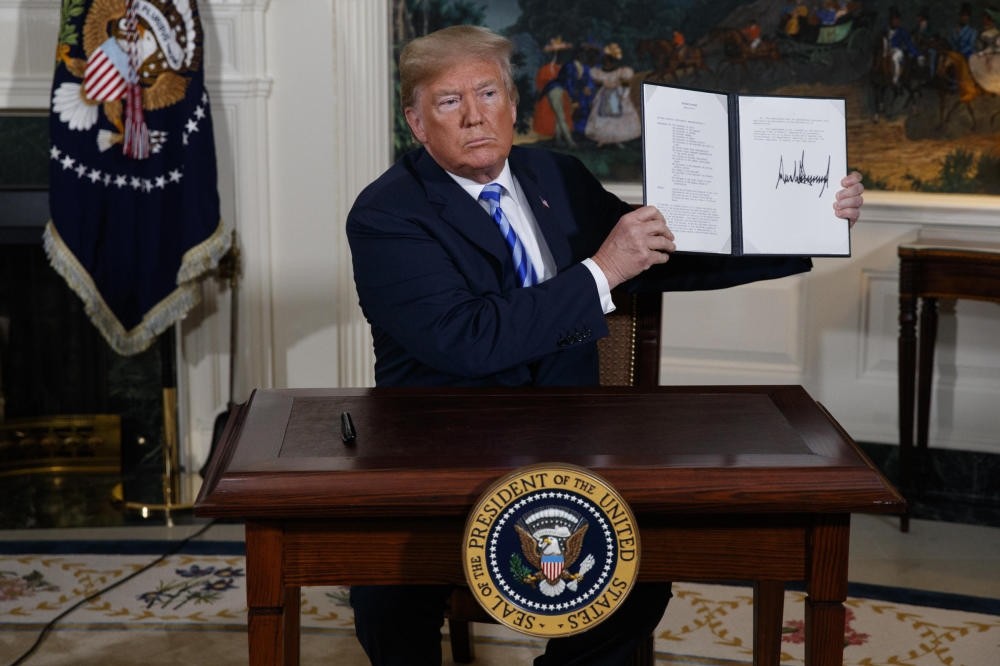 President Trump shows a signed presidential memorandum reinstating US nuclear sanctions on the Iranian regime on May 8, 2018. Evan Vucci/AP
by Daily Sabah May 11, 2018 12:00 am

International reactions against U.S. President Donald Trump's announcement to withdraw from the Iran nuclear deal are growing as Washington is blamed for breaking an agreement and risking regional stability

Washington has lost its credibility in the international arena by withdrawing from the nuclear deal with Iran. Several countries, including traditional allies, have strongly reacted against the U.S. for reneging on its promise.

After his long-running criticisms since the time he stepped into White House, U.S. President Donald Trump finally announced on Tuesday the U.S.'s exit from the agreement with Iran, known as the Joint Comprehensive Plan of Action (JCPOA).

He asserted that the "decaying, rotten structure of the agreement" is not able to prevent "an Iranian nuclear bomb."

The U.S.'s allies, however, didn't seem to share grave concerns of the U.S. president, and strongly criticized the decision - not only for breaking an agreement, but also for risking the stability of the region.

President Recep Tayyip Erdoğan said on Tuesday that Washington will not gain anything from pulling out of the deal, adding that the agreement was a hope for regional stability.

The deal was made "possible after years of negativity, in the end raising hope all around the globe. At the drop of a hat, turning this deal around and retreating from this deal, is not just going to possibly impact the region but it might affect the entire world," Erdoğan told CNN International.

The president told his Iranian counterpart Hassan Rouhani Thursday in a phone call that he sees the U.S.'s withdrawal from deal as "wron

g." The two agreed that they are in favor of maintaining the agreement in that conversation.

Also on Thursday, German Chancellor Angela Merkel disclosed the fracture in the traditional Europe-U.S. alliance by saying that Europe can no longer rely on the United States to protect it and urged the bloc to take its destiny into its own hands.

"It is no longer such that the United States simply protects us, but Europe must take its destiny into its own hands, that's the task of the future," she said, after Trump's exit decision.

French President Emmanuel Macron also urged Europe on the same day to unite and exert a self-confident "European sovereignty" in the face of an increasingly complex world and unilateral American moves on issues such as the Iran nuclear deal and climate change.

The Russian Foreign Ministry said Thursday that Russia will maintain close coordination on nuclear issues with Iran despite the U.S.'s decision.

The Iranian deal, also known as the P5+1, was signed by Tehran and six other superpowers, which includes the five permanent members of the United Nations Security Council - the U.S., Russia, France, China, the U.K. - plus Germany and the European Union.

So far, along with overwhelming majority of countries from different regions of the world, international associations also stated their disturbance over the U.S.'s decision.

U.N. Secretary-General Antonio Guterres called the nuclear deal "a major achievement" that "has contributed to regional and international peace and security" and said he was "deeply concerned" by the U.S.'s decision.

ernational Atomic Energy Agency (IAEA), which was tasked with monitoring and verifying Iran's adherence to the 2015 deal, also said that "as of today, the IAEA can confirm that the nuclear-related commitments are being implemented by Iran."

Even so, the U.S. has some support for the decision.

Not surprisingly, Israeli Prime Minister Benjamin Netanyahu hailed Trump's decision and said that leaving the deal unchanged would be "a recipe for disaster, a disaster for our region, a disaster for the peace of the world."

"The kingdom supports and welcomes the steps announced by the U.S. president toward withdrawing from the nuclear deal... and reinstating economic sanctions against Iran," Saudi Arabia's foreign ministry said.