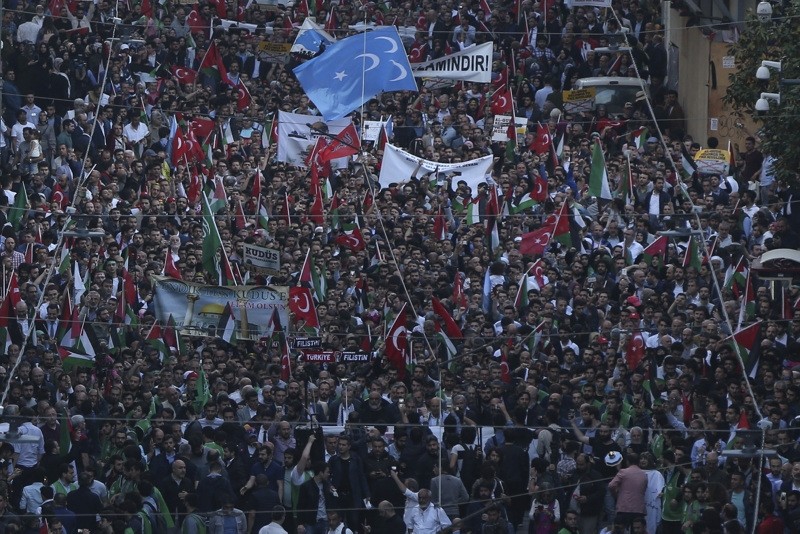 Turkey recalled its ambassadors to Washington and Tel Aviv, and declared three days of mourning to commemorate Palestinians killed by Israeli forces, President Recep Tayyip Erdoğan announced late Monday. The next day, the foreign ministry summoned the Israeli ambassador over the violence in Gaza.

Speaking in London, Erdoğan said, as the Rotating Chairman of the Organization of Islamic Cooperation (OIC), he will chair an extraordinary meeting on Friday regarding the Palestinian deaths and called on the United Nations Security Council to gather for an emergency meeting.

Gaza experienced its bloodiest massacre since 2014 on Monday, as the Israeli military killed at least 52 Palestinians and wounded more than 2,400 others as protesters streamed to the frontier for the climax of a six-week demonstration as the United States prepared to open its embassy in Jerusalem.

Speaking at the ruling Justice and Development Party (AK Party) parliamentary group meeting on Tuesday, Prime Minister Binali Yıldırım said that the Parliament will convene later in the day to hold a special session on the issue of Jerusalem.

"The U.S. has ignored the will of 128 UN member countries and insisted on this wrong decision. The result is the deaths of 60 people, injuries of thousands," Yıldırım said, referring to the U.N. General Assembly resolution adopted by 128 countries on May 21, 2017 against U.S. President Donald Trump's decision to recognize Jerusalem as Israel's capital and relocate the U.S. embassy there from Tel Aviv.

Yıldırım reiterated that Turkey stands with Palestinians as a whole.

Earlier on Monday, the Foreign Ministry had also strongly condemned the attacks in a written statement.

"We curse the massacre carried out by Israeli security forces encouraged by this step on the Palestinians participating in peaceful demonstrations. Neither regional nor global peace and stability will be viable unless the Palestinian question is settled through a lasting and just solution and unfair treatments towards Palestinian people cease," the statement said.

"We strongly condemn the decision of the U.S. Administration to move its embassy from Tel Aviv to Jerusalem violating international law and all relevant UN Resolutions. We reiterate that this action is legally null and void," it added.