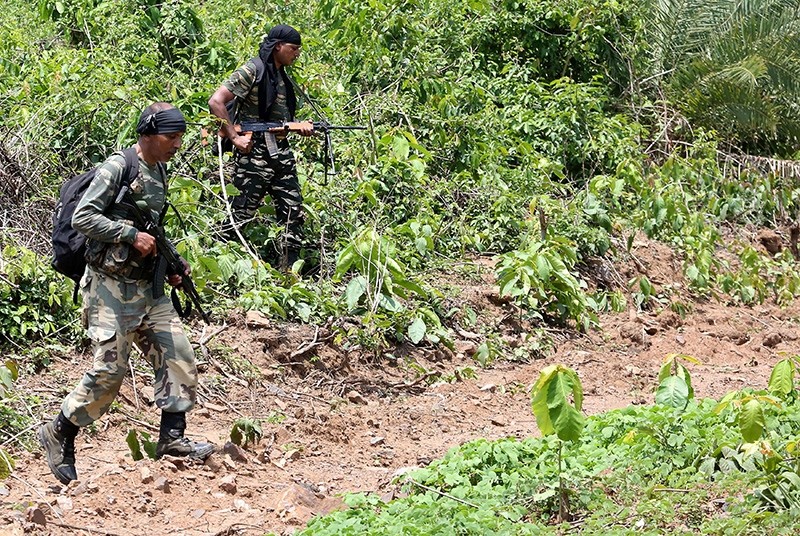 This photo taken on May 9, 2018 shows Indian military personnel patrolling in the Saranda forest area in operations against Maoist rebels in the West Singhbhum district of India's eastern Jharkhand state. (AFP Photo)
by Compiled from Wire Services
May 21, 2018 12:00 am

"We are saddened by the loss of lives of seven policemen in the terrorist attack that took place in Chhattisgarh, India," the ministry said in a statement Monday.

The officers were killed as Maoist insurgents blew up an improvised explosive device as a police vehicle passed by in a remote forest in eastern India, where the guerrillas have been waging an insurgency for decades.

"We condemn this terrorist attack and extend our condolences to the families of the policemen who lost their lives and to the people of India," the Turkish ministry said.

The police were escorting a truck carrying material for road construction in the Dantewada district of Chhattisgarh state. The Maoists, who were waiting at a distance, snatched the weapons of the dead policemen including two AK-47s, IANS news agency reported citing police sources.

India's Maoist insurgency began in the 1960s and has cost thousands of lives in almost daily incidents of violence.

In March eight Indian paramilitary troopers were killed when their vehicle drove over an explosive device.

The Maoists are believed to be present in at least 20 Indian states but are most active in forested resource-rich areas known as the "red corridor" linking the states of Chhattisgarh, Orissa, Bihar, Jharkhand and Maharashtra.

The rebels, also known as Naxals, claim to be fighting for the rights of the indigenous tribal people, including the right to land, resources and jobs.