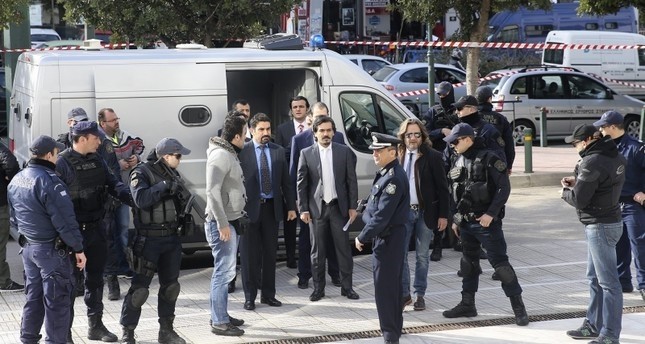 After the July 15 coup attempt, eight soldiers escaped to Greece in a Sikorsky helicopter and landed in Alexandroupolis, Greece.
by Daily Sabah Jun 06, 2018 12:00 am

Greece defended its move of releasing eight putschist officers that participated in the July 15, 2016 coup attempt in Turkey by saying that they will not extradite anyone to Ankara.

Speaking to Greek state television ERT yesterday, Greek Foreign Minister Nikos Kotzias said that Turkey is aware of the fact that Greece is not a country to play with after it released coup plotters, which was considered a hostile move by Turkey.

Responding to government spokesman Deputy Prime Minister Bekir Bozdağ's statements on the release of the officers, Kozsias said that "these kind of inappropriate statements are for the ones who conduct a foreign policy that is based on domestic politics."

Speaking on Greece's move, Bozdağ said on Monday that it is unacceptable for Turkey that Greece supports the putschists.

The Ministry of Foreign Affairs also released a statement yesterday, condemning Greece's decision. "With this decision, the putschists will be free in Greece. Greece has declared clearly that it is a country that provides a safe haven for putschists," the statement said.

The statement added that Ankara will continue its extradition efforts for the putschists and seek their trial in Turkey.

Greece has so far granted asylum to one of the putschists, while the cases of the others are pending though authorities are expected to grant them asylum as well.

Özkaynakçı and others hijacked a military helicopter and fled to Greece when the coup, blamed on military infiltrators of the Gülenist Terror Group (FETÖ), was thwarted.

The maximum detention period expired for the soldiers at the end of May.

After the coup attempt in 2016, eight soldiers, consisting of two commanders, four captains and two sergeants, escaped to Greece in a Sikorsky helicopter and landed in Alexandroupolis.

Following their landing, they asked for asylum from Greek authorities. Before their asylum request was taken to court, a Greek court sentenced the eight men to a suspended two-month jail sentence for illegal entry into Greece.

The Turkish government formally requested that Greece extradite them. Greece rejected Turkey's third extradition request for the eight soldiers in March. The Greek appeals court handling the case ruled that the suspects would not get a fair trial in Turkey if extradited. Meanwhile, Turkey says it is unacceptable to grant asylum to the putschists and accused Greece to exploiting the judicial process for its political interest.

Bozdağ also added that Turkey thought the Greek Prime Minister Alexis Tsipras would remain true to his word. The Turkish minister reminded that Tsipras had promised initially to extradite the former soldiers yet the promise was never kept.

On Monday, a lawyer representing the eight suspects wanted by Turkey for their role in the coup attempt said they were freed pending a ruling on their applications for asylum. The eight men were already living in a secret location under police protection.