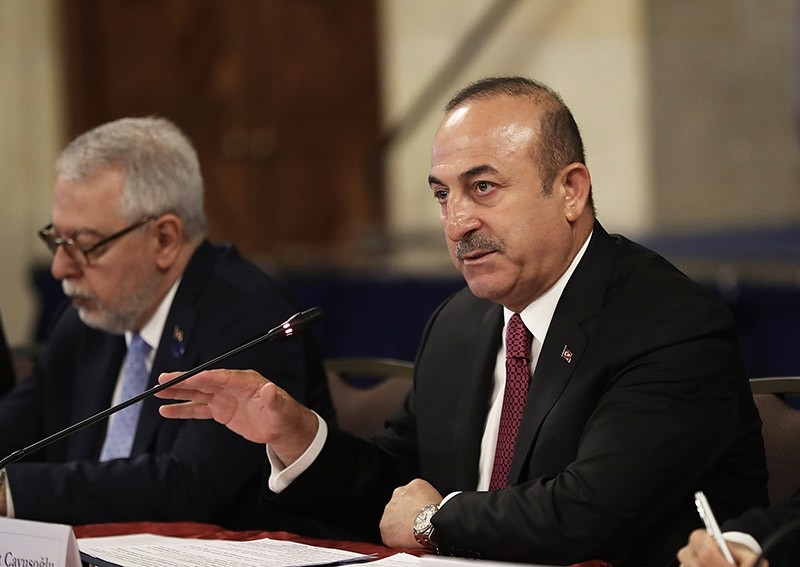 This was a step taken by Ankara in response to Athens's tolerance of putschist soldiers in Greece.

"What Greece did is unacceptable. It's Greece that has suffered a lot from coups. The government really wants to solve the issue," Çavuşoğlu said.

However, he added that there is a "a lot of pressure from the West on the Greek judiciary."

The foreign minister's remarks in the southern resort town of Antalya came after the recent decision by a Greek court to release eight putschist soldiers who had fled Turkey after the July 15, 2016 coup attempt while they await their asylum applications. After the coup attempt in 2016, eight soldiers – consisting of two commanders, four captains and two sergeants – escaped to Greece in a Sikorsky helicopter and landed in Alexandroupolis. Following their landing, they asked for asylum from Greek authorities.

"We have a migrant deal with the EU, which is currently in place. We also have a bilateral readmission agreement with Greece, [but] right now we are suspending this deal," Çavuşoğlu said, adding that the retaliatory efforts against Greece will continue.

The Greece-Turkey Readmission Agreement, signed in 2002, allows the return of "irregular migrants" to Turkey from Greece and vice versa.

According to this agreement, the "irregular migrants" who had crossed into the mainland Greece from Turkey would be returned back to Turkey, and this did not include some of the islands on the Aegean Sea, on the route used by refugees to go to Europe.

There are some 4 million Syrian refugees living in Turkey, creating a huge social, economic, and political burden on the country, which has been a main route for refugees trying to cross into Europe since the beginning of the civil war in Syria.

Many have attempted to cross into Greece through the sea or the land to reach the EU borders. However, with the agreement, there has been a significant decrease in illegal migration from Turkey on the Aegean Sea.

Of the irregular migrants held in 2017 in Turkey, who tried to cross into Europe, the majority came from Pakistan, numbering around 15,000, followed by Afghans, at about 12,000 and Syrians totaled 10,000.

According to reports, some 60,000 asylum seekers are trapped in Greece after European countries started closing their borders one by one in the face of the rising refugee influx.

The strained Greece-Turkey ties are not new, though there had been attempts from both sides to normalize ties. The main issues have historically been related to the Cyprus and the situation of islands in the Aegean.

Recently, Turkish warships blocked an Italian oil rig from reaching a natural gas exploration zone unilaterally declared by the Greek Cypriot administration, Turkey opposes the drilling before a permanent solution is reached on the island.

In another incident, two coast guard vessels, one Turkish and one Greek, collided off the Kardak islets rekindling tensions in the two-decade issue stemming from the larger territorial waters dispute in the Aegean.

The Greek court's decision on pustchist soldiers, participated in the 2016 coup attempt, have, indeed, added to the already shaky relations. Turkey has repeatedly called for the extradition of the suspected coup-plotters, including during President Recep Tayyip Erdoğan's official visit to Greece last December.

On July 15, 2016, Gülenist Terror Group (FETÖ) members attempted to overthrow the government and take over the state through a coup attempt. In the events, 250 people were killed and more than 2,200 were injured.