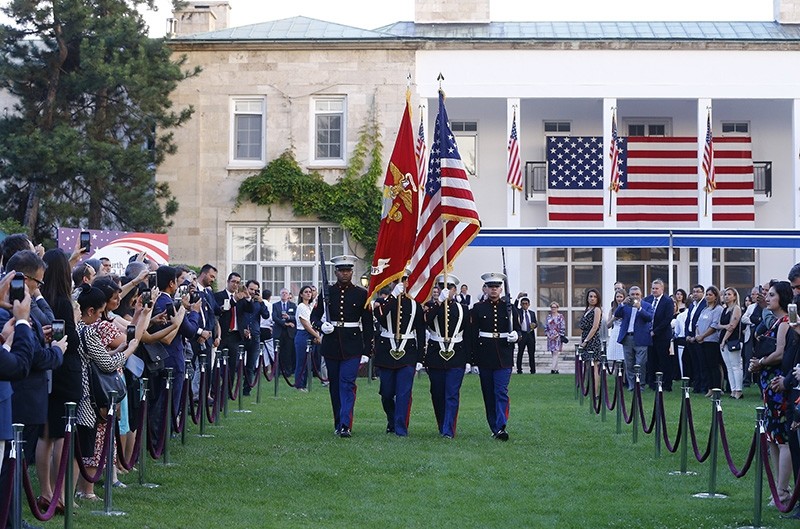 The U.S. Embassy in Ankara celebrated the country's Independence Day on Monday evening with a reception at the embassy building.

Speaking at the reception, Turkish Foreign Ministry Undersecretary Ümit Yalçın said working group meetings between the U.S. and Turkey on Manbij, Syria will "continue to be a path to a solution to delicate issues."

Hailing the U.S.' 242nd Independence Day, Yalçın said ties between Turkey and its NATO ally and strategic partner are having "one of their busiest periods ever."

Also speaking at the reception, U.S. Embassy Charge D'affaires Philip Kosnett said both Turkey and the U.S. are committed to rebuilding their relationship.

"I believe that starting at the very top from President [Donald] Trump and President [Recep Tayyip] Erdoğan, there are very strong signals that rebuilding the Turkish-American relationship is an important priority," Kosnett said.

Kosnett told reporters separately on Monday that Trump has been taking his time to appoint "a highly qualified individual" as the ambassador to Turkey.

At the reception, Kosnett said the status of Pastor Andrew Brunson, other American citizens and local Turkish employees of the U.S. mission should be resolved for progress in bilateral relations.

However, the progress that Turkey and the U.S. have made building new security arrangements in northern Syria, starting with Manbij, served for the establishment of "a positive tone for the relationship more broadly," Kosnett said.

He also underlined that the deployment of Turkish and U.S. forces in northern Syria is fundamentally to protect citizens of Turkey, the U.S. and Syria against "all manifestations of terrorism."

Backed by the U.S., the PKK-linked People's Protection Units (YPG) terrorist group occupied Aleppo's Manbij district in August 2016 on the pretext that it was fighting Daesh terror group.

Last month, a roadmap for securing the region was unveiled following a meeting in Washington between Foreign Minister Mevlüt Çavuşoğlu and U.S. Secretary of State Mike Pompeo.

The deal explicitly calls for the immediate withdrawal of the YPG terrorist group from Manbij.

On Sunday, the Turkish General Staff announced that the Turkish and U.S. militaries had -- in line with the roadmap -- conducted separate patrols in the zone between areas liberated by Operation Euphrates Shield and Manbij.

In its more than 30-year terror campaign against Turkey, the PKK has claimed some 40,000 lives, including those of numerous women and children. The YPG is the group's Syrian affiliate.

Ankara says that the presence of terrorist groups near its border constitutes a clear and present danger and remains engaged in military operations aimed at purging the region of the terrorist presence.