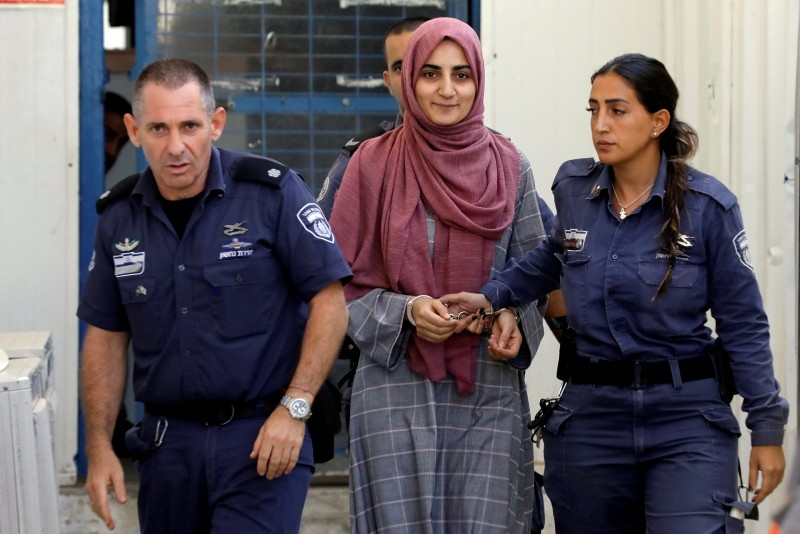 An Israeli military court on Monday ordered the conditional release for a Turkish citizen, who has been under arrest since June 11 for alleged links to terrorist groups during a touristic visit to Jerusalem, according to the lawyer for Ebru Özkan.

Özkan is Muslim tourist of Turkish origin who was the latest target of Israel's random detention policy against Muslims. Her arrest on vague charges in June 11 raised a public outcry in Turkey and brought Israel's intimidation towards the Muslim faithful back into the spotlight.

Omar Khamaysa, Özkan's attorney, told Anadolu Agency that during today's hearing at a military court in Salem, northern Israel, the court ordered a pending trial and conditional release for his client.

Khamaysa stressed that his client will be free if the Israeli prosecutor does not appeal the verdict by 5 p.m. tomorrow. The conditions for her release are 15,000 Israeli shekel ($4,125) in bail, confiscation of her passport, and her signing in twice a week at a nearby police station.

Khamaysa said she was charged with asking to transfer money and a cell phone charger to Hamas members, but she wasn't aware of their identity.

He said earlier that the 27-year-old woman was charged with helping terrorists but the only tangible evidence was apparently "bringing five bottles of perfume" from Turkey to Israel and hand it out to an unidentified Palestinian.

Both were members of Hamas, which is viewed as a terrorist group by Israel, according to the indictment against Özkan. Özkan denied that she was aware of the Hamas links of the people she contacted. She was interrogated in Arabic despite having very little command of Arabic, Khamaysa informed media outlets.

If the Israeli prosecutor fails to provide sufficient evidence, the lawyer asserted, the court order for a pending trial will come into force, and today's ruling has no sign on any ban on Özkan speaking to the press.

However, Israeli prosecutor objected to Özkan release on Tuesday, and it is not clear whether she will be freed.

Otherwise, Khamaysa said, the case will go to a higher court. Officials from the Turkish Embassy in Tel Aviv also attended today's trial, he said.

Özkan was arrested on charges of threatening Israel's security and links with terrorist groups, allegations which she denies. She was among 38 Turkish tourists on a trip to Jerusalem. Her friends dispute Israel's allegations and say she was simply there to visit Al-Aqsa Mosque in the city. Like other Muslims, she spent a night at the mosque by reciting and performing prayers at the third holiest site of Islam.

Israel's disproportionate policy of detaining anyone with a Muslim background or people they suspect of having ties to Palestinian or Muslim associations in general raise serious human rights concerns. In particular, Israeli officials target those seeking to visit Jerusalem where sites sacred to the Muslim faithful are located.

Osman Hazır, another Turkish national, was arrested by Israel after he took a selfie while holding a Turkish flag at the same mosque in January.

One month before that, Israeli police barred Abdullah Kızılırmak and Mehmet Gargılı from entering the holy site and subsequently arrested them, also in December 2017, Adem Koç, another Turk, was arrested inside the mosque compound. All three were charged with disturbing the peace and taking part in an illegal rally and were later released on bail.

Turkish Foreign Minister Mevlüt Çavuşoğlu condemned the arrest and implied that they would respond to the arrest of Özkan though he did not elaborate. Turkish citizens visiting Israel already complain of random, arbitrary detentions at the airports and hours of interrogation by security forces, despite perceived improvement in relations between Turkey and Israel after a bitter row.

"For genuine normalization of our relations, Israel should end its wrong policies and its inhumane cruelty. We are aware of their treatment towards some Turkish citizens. Lately, they extended the detention of our sister Ebru Özkan. They should not force us to take a step to counter it. We will not exert pressure on civilians but if Israel takes steps to deter our citizens from visiting Jerusalem, we will give a response to them. Our relations will only normalize once Israel ends these inhumane, wrong policies," the foreign minister said.

Ebru Özkan was picked from among 38 Turkish nationals visiting Al-Aqsa mosque, the third holiest site in Islam, in Jerusalem as part of a tourist trip. Despite granting her a tourist visa earlier, Israeli officials decided to detain her while she was returning to Turkey, for charges dating back to 2016. She was detained at Tel Aviv's Ben Gurion Airport moments before her flight back to Turkey. Since then, she has remained in detention with a court extending the detention period twice.

Although Israel detains people from other nationalities as well, Turkish citizens make the headlines in Israeli and international media as Ankara is the most outspoken critic of Tel Aviv for its policies against Palestinians. She was also probably the first Turkish national to be paraded before cameras while handcuffed and shackled before she was brought to a military court to set the hearing date.