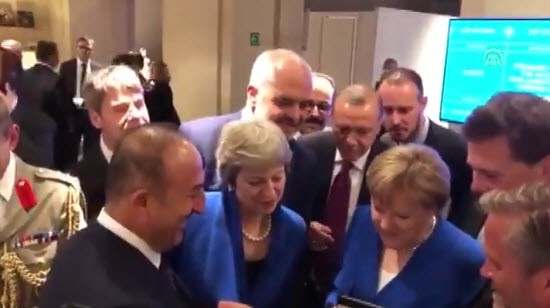 The World Cup is a huge occasion bringing excitement around the globe with very few remaining indifferent.

This has been proven correct for world leaders as well during NATO leaders' summit on Wednesday.

A close semifinal battle was raging on as NATO leaders were enjoying the working dinner in Brussels.

However, as the game went to extra-time, where Croatia took the lead against England in the 109th minute, the participants could not resist watching the dramatic game.

After the final whistle, Erdoğan, Merkel and Rama tried to console May on England's loss.

The game, officiated by Turkish referee Cüneyt Çakır, started very well for England as Kieran Tripier fired a magnificent free kick home in the 5th minute. Croatia, however, found the strength to come back from behind thanks to goals from Ivan Perisic in 68th minute and Mario Mandzukic in second half of extra time.

The Balkan team will face France in the World Cup final at the Luzhniki Stadium in Moscow on July 15.