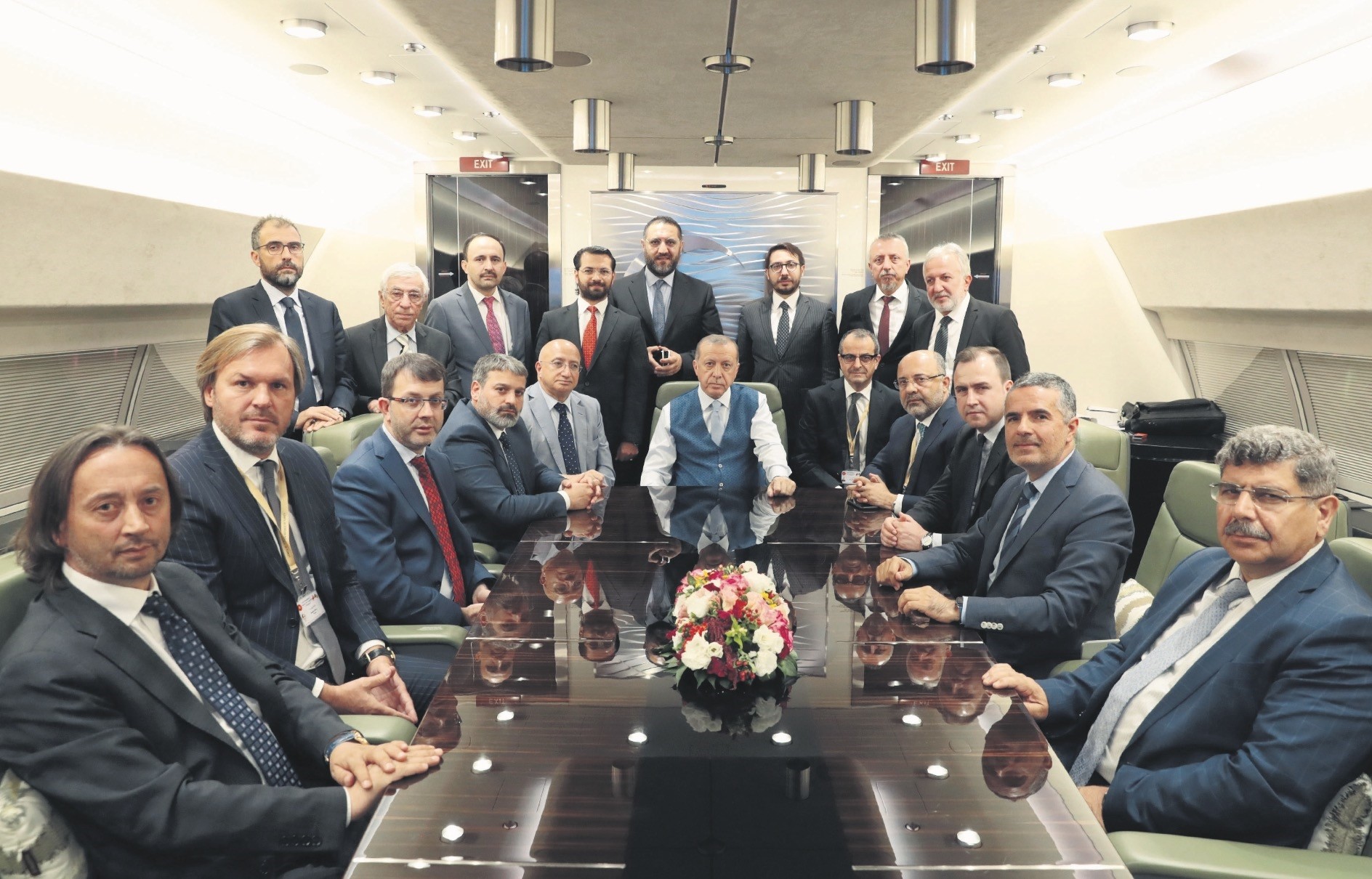 President Recep Tayyip Erdou011fan with members of the Turkish press on his way back from Brussels, yesterday.
by Serdar Karagöz
Jul 14, 2018 12:00 am

The NATO alliance should increase their dialogue channels with Russia to minimize military tensions, President Recep Tayyip Erdoğan told journalists accompanying him during the NATO leaders' summit in Brussels on Friday.

"We pointed out the need for increasing political and military dialogue with Russia to minimize military risks and establish transparency," Erdoğan said.

The 29-member alliance was formed in 1949 to counter the threat of post-war communist expansion by the Soviet Union and its aims of increasing political influence over European countries. Despite the collapse of the Soviet Union in 1991 and the end of the Warsaw Pact, which acted as a counter alliance against NATO, military tensions have continued between Russia and NATO, particularly the EU and the United States. To overcome postwar tensions between the two poles, the North Atlantic Cooperation Council (NACC) was established in 1991 as a platform for dialogue and cooperation. Yet, the tensions never disappeared, particularly in areas where their interests clashed, including on natural resources as well as military and territorial tensions.

On Monday, a meeting is scheduled to be held between the U.S. President Donald Trump and the Russian President Vladimir Putin in the Finnish capital, Helsinki. The two leaders are expected to discuss bilateral relations and seek ground for future prospects. On Thursday, Trump described Putin as a "competitor" and not an enemy. Washington and Moscow have conflicting stances over the crisis in the Ukraine and also Syria. Moscow is also being accused of meddling in the 2016 White House race, in favor of Trump, by U.S. intelligence agencies.

"I think this summit is very important," Erdoğan said, referring to the Trump-Putin meeting in Helsinki, adding that Ankara will follow how it will unfold.

Meanwhile, the Turkish president added that a phone call with Putin is being arranged for Saturday and that he will offer his Russian counterpart an opportunity to get together at a summit in Turkey to discuss regional matters.

"If he [Putin] accepts this offer, it would be good for us too. Maybe we can invite one or two more states to the summit as well. With this, I think we would make the situation more stable in the region," Erdoğan said.

Turkey, Russia and Iran have been cooperating over finding a solution to the Syrian crisis, in what has been known as the Astana talks.

Trump writes letter to Congress on sale of F-35s

Erdoğan said he discussed the situation in Manbij, northern Syria, as well as Turkey's purchase of F-35s with Trump on the sidelines of the NATO summit in Brussels.

"With the last installment, we would be paying $900 million. We had already paid $800 million. The remaining $100 million will be paid in a few days. Mr. Trump said the deal will be implemented as is. He said he had given necessary orders. The White House has sent a letter to Congress. He said he is opposed to sanctions," said the president.

The ceremony for the delivery of the first two F-35s to Turkey was held last month at Lockheed Martin's facilities in Fort Worth, Texas. The jets will remain in the U.S. for training activities and will be shipped to Turkey by November 2019 and be stationed at an integrated air base in Turkey's eastern province of Malatya.

The delivery of Turkey's F-35 jet took place at a time when the U.S. Senate had been working to block the transaction. The U.S. Senate in late June had passed a $716 billion defense policy bill, which included an amendment advising U.S. President Donald Trump and the U.S. Department of Defense (DOD) to prohibit the F-35 Joint Strike Fighter Jets sales to Turkey. The Republican-controlled U.S. Senate voted 85-10 for the annual National Defense Authorization Act (NDDA) for the Fiscal Year 2019.

Turkey has been a partner in the F-35 Joint Strike Fighter project, a consortium of nine countries, since 1999. The country is expected to receive six F-35 jets by 2020.

The Turkish defense industry has been playing an active role in the production of the fifth generation F-35 fighter jets. It is estimated that the Turkish firms, including the defense giant Aselsan, Turkish Aerospace Industries (TAI), Alp Aviation, Havelsan and Kale Aero, will reach a trade volume of $12 billion in the production process.

Meanwhile, "the Manbij deal is continuing as planned. However, our actual aim is that the U.S. cut all of its cooperation with the PYD [Democratic Union Party] and the YPG [People's Protection Units]," Erdoğan said, referring to U.S. military support for the PKK terror group's Syrian affiliate under the pretext of fighting Daesh.

The Manbij deal, made between Turkey and the U.S., focuses on the withdrawal of the YPG terrorist organiz

ation from the northern Syrian city in order to create stability in the region. Previously, U.S. military support for the YPG terrorist group in Manbij had strained ties between Ankara and Washington and had led to fears of military clashes between the two NATO allies, since there were roughly 2,000 U.S. troops deployed in the city.

However, a Manbij road map was announced after a meeting in Washington between Foreign Minister Mevlüt Çavuşoğlu and U.S. Secretary of State Mike Pompeo in early June. Should the Manbij model prove to be a success, Turkey will push for a similar arrangement in eastern Syria to remove terrorist elements that have major affiliations with the PKK.

Erdoğan said, however, that halting cooperation with the YPG does not seem to be on the U.S. agenda.

"What is on the agenda in Manbij right now is for the YPG to move east of the Euphrates [River] and ensuring that the actual owners of Manbij [return], which previously had a 90 percent Arab population," said the president.

During the summit in Brussels, Erdoğan also met with German Chancellor Angela Merkel where the migrant deal between the Turkey and the EU was discussed.

"In our meeting, we discussed the transfer of funds agreed on in the March 18 migrant deal. We said that the transfer of funds must be accelerated. As you know, the deal was 3+3 billion euros. The pledged first payment was not delivered in a timely manner," Erdoğan said and added that the second payment has not yet been transferred to Turkey. He added that the issue was also discussed during his meetings with the Italian prime minister and the French president.

Turkey and the EU signed an agreement on March 18, 2016, to stem the inflow of refugees to Europe, which is considered unbearable by the EU. Turkey has been the main route for refugees trying to cross into Europe since the beginning of the civil war in Syria. With the agreement, irregular arrivals decreased by around 99 percent, thus preventing the loss of many lives at sea.

The deal included a 6-billion-euro aid package to help Turkey care for millions of refugees hosted in the country, and the EU promised to initially allocate 3 billion euros in its first tranche to support Syrian refugees. The deal was also to provide visa-free travel for Turkish citizens to the Schengen area. However, this has yet to be implemented as relations between Turkey and the EU have been strained and await resolution.

Erdoğan also said that Ankara's concerns over the verdict in the National Socialist Underground (NSU) case were delivered to Merkel.

Munich court announced the much-anticipated NSU verdict in the five-year trial last week. Beate Zschaepe, the sole surviving member of the neo-Nazi gang behind the murders of eight Turks, was sentenced to life for her role. Four others were handed down prison sentences of between three and 10 years for aiding and abetting the gang.

"We conveyed our concerns that the verdict was not satisfactory and that further investigation was needed in the case."

The NSU is implicated in the killing of 10 people, including eight Turks and a Greek man, mainly for racist motives. The gang, which consisted of Zschaepe, Uwe Mundlos and Uwe Boehnhardt, also killed a German policewoman. The gang is also charged with a bomb attack on a Turkish neighborhood in Germany. Mundlos and Bohnhardt took their own lives when the police closed in on them. The trial started five years ago, but it failed to respond to allegations of a cover-up of intelligence services' ties to the gang and the neo-Nazi scene in general. Zschaepe had set a house she shared with Mundlos and Bohnhardt on fire in an attempt to destroy evidence related to the crimes of the NSU in 2011 before turning herself in to the police.

Erdoğan added that Ankara's concerns over the presence and activities of members of the Gülenist Terror Group (FETÖ) and PKK followers in Germany still exist and that they were also delivered to Merkel. He said the need for a more determined stance against terrorism by Germany was also voiced during the meeting.

Turkey does its part on NATO burden sharing

Erdoğan said that Turkey has been doing its best to meet its part in NATO burden sharing, an issue that the U.S. president has been vocal about in all NATO related meetings. Member countries are expected to financially support NATO with 2 percent of their GDP. Trump has been criticizing NATO members, saying that many of the wealthy and developed countries have not met or come near the threshold.

"Turkey's support at the moment is about 1.8 percent. Of course, we have also spent about $30 billion on equipment and ammunition," Erdoğan said and added that Turkey will continue its position by increasing its support to the alliance.

"In this perspective, NATO has a very positive perception of our country," Erdoğan said and recalled that the goal of 2 percent by 2024 was set during the administration of former U.S. President Barack Obama. Trump has asked that this goal be increased to 4 percent by 2024.

Erdoğan added that many countries also voiced their concerns over the financially liability to NATO, saying that their budgets do not allow that. The president also said that sanctions imposed on Russia push countries to look for more costly alternatives, particularly in energy-related matters.