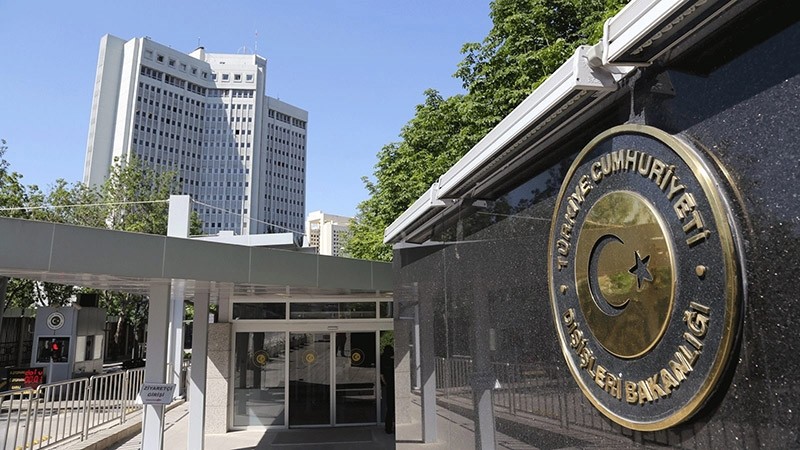 The Jewish nation-state bill passed by the Israeli parliament early Thursday disregards the norms of universal law and the rights of Palestinian-origin Israeli citizens, the Turkish foreign ministry said in a statement.

"The law announcing Jerusalem, occupied by Israel, as the capital city is null and void in the eyes of the international community," the ministry said, adding that promoting Jewish settlements that have been repeatedly deemed unlawful by the United Nations is also "unacceptable."

Giving the right of self-determination only to Jews is "the product of an outdated and discriminatory mentality" and the law "eliminates the vision of a two-state solution," the ministry warned.

The ministry also called on the international community to respond to Israel's bid to cover up ongoing occupant and unlawful activities in Palestine.

Vice President Fuat Oktay also lashed out at the bill and said it hurts the rule of law and cannot be accepted by the Republic of Turkey.

Presidency Spokesperson Ibrahim Kalın also criticized the bill, saying that Turkey condemns the move in the strongest terms and it is unacceptable to accept this racist step aiming to legally erase the people of Palestine from their homeland.

The controversial legislation officially defines Israel as the "national homeland of the Jewish people."

The law, which passed with a 62-55 backing, is defined as a "basic law," granting it quasi-constitutional status.

Opponents to the law say it marginalizes the country's Arab minority. One clause downgrades the Arabic language from official to "special" standing.

Israel's Arab citizens number some 1.8 million, about 20 percent of the 9 million population.

Early drafts had gone further in what critics at home and abroad saw as discrimination towards Arabs, who have long said they are treated in Israel as second-class citizens.

Clauses that were dropped after political wrangling would have enshrined in law the establishment of Jewish-only communities.

"This controversial law is another attempt to obliterate the Arab-Palestinian identity and to institutionalize and legitimize apartheid policies rather than promoting peace," Palestinian Prime Minister Rami Hamdallah said in a statement.

Hamdallah also said the law, which refers to the contested city of Jerusalem as Israel's capital, "is the last nail in the coffin of the two-state solution."

The European Union on Thursday also said it was concerned about the new Israeli law.

"We are concerned, we have expressed this concern and we will continue to engage with Israeli authorities in this context," a spokeswoman for EU foreign affairs chief Federica Mogherini told a news briefing.

"We've been very clear when it comes to the two-state solution, we believe it is the only way forward and any step that would further complicate or prevent this solution from becoming a reality should be avoided," she said.