Four decades on, Cyprus still looking for a political solution 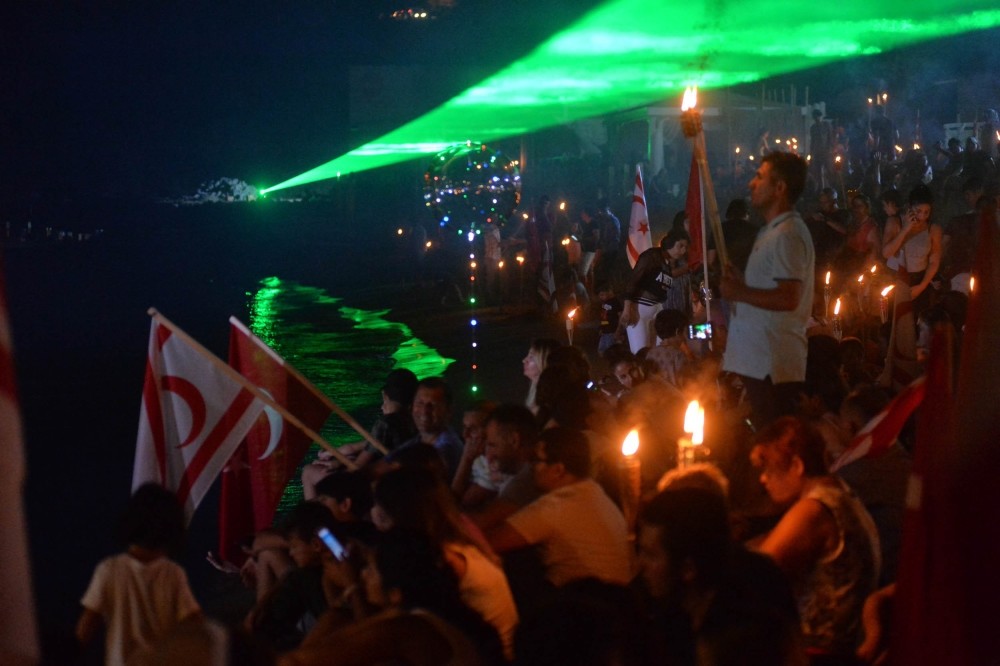 Friday marked the 44th anniversary of Turkey's operation in Cyprus to end Greek occupation. Yet, no solution has been reached with the Greek Cypriot administration which insists on unilateral decision making and actions

More than four decades have passed since Turkey launched a military operation to protect the Turkish population in northern Cyprus, but a political solution to the division on the island still remains out of the reach.

On Friday, thousands gathered at the Five Mile Beach (Yavuz Çıkarma Plajı), in the Turkish Republic of Northern Cyprus (TRNC), to commemorate the 44th anniversary of Turkey's Operation Atilla in 1974 at a dawn vigil, which is also celebrated as the July 20 Peace and Freedom Day. The beach is where the Turkish forces landed on the island on the day of the operation.

"[It is] the most honorable day in the Turkish Cypriots' struggle for right and freedom, and continue their existence as the equal owner of the island," Turkey's newly-appointed Vice President Fuat Oktay, who visited the Island for the commemorations, said at another event in Lefkosa.

Oktay said the Turkish military used its rights under international agreements to protect Turks in Cyprus. "[Turkey] defeated the attempts to eradicate the Turkish Cypriots and remove them from pages of history," he added, referring to the operation, which was launched under the codename "Ayşe Tatile Çıksın" (Ayşe should go on vacation). Ayşe was the name of the then-foreign minister Turan Güneş's daughter's name.

"That day, Turkey, as a guarantor, showed to the whole world that it will continue to stand by Turkish Cypriots no matter what," Turkish vice president said.

On Friday, President Recep Tayyip Erdoğan also released a statement criticizing the Greek Cypriot administration for its unwillingness to reach a solution. He reiterated that Turkey will stand by the Turkish Cypriots and their rights.

The developments that set the stage for the Cyprus Peace Operations began in 1959 when the London and Zurich Agreements were signed between Turkey, Greece and the U.K. for the constitution of the Republic of Cyprus, on the basis of equality of rights.

However, the Turkish Cypriots, who had been attacked since 1963 by Greek Cypriot armed groups, which peaked in the Bloody Christmas, were removed from the state administration by pressure and oppression. From that date on, Turkish Cypriots were forced to live in enclaves scattered throughout the island.

Ultra-nationalist and anti-Turkish Nikos Sampson, one of the leaders of EOKA B, a Greek Cypriot paramilitary group formed in 1971, overthrew then-President Archbishop

Makarios on July 15, 1974, with the support of the then Greek military junta.

When the news of the coup arrived in Ankara, the National Security Council (MGK) was convened. Turkey's then Prime Minister Bülent Ecevit instructed the Turkish Armed Forces (TSK) to prepare for a possible operation in Cyprus.

EARLY EFFORTS IN GENEVA NOT FRUITFUL

Following the events and Turkey's intervention into the crisis, a process for peace was initiated in Geneva on July 25, 1974, following the collapse of the Greek military junta on July 23, 1974, mainly due to the events in Cyprus.

However, the talks were not fruitful and short lived. Talks in Geneva ended on July 30. Although the parties wished the continuation of the cease-fire, Greek Cypriot forces launched an attack in the western part of Girne (Kyrenia) on Aug. 6.

The sides met for the second time in Geneva to discuss the terms of the peace. The then Turkish Cypriot community leader Rauf Denktaş and the Greek Cypriot leader Glafcos Clerides attended the talks.

The delegation representing the Turkish Cypriots stated that the island needed a new constitution and a federation system should be established and 34 percent of the territory should be left to the Turkish side. After the Greek Cypriots and Greece rejected the demands of the Turkish side, the conference ended without any result.

A SECOND INTERVENTION AGAINST OCCUPATION

On Aug. 14, 1974, Turkey launched a second operation to save the regions from the Greek occupation. During the operation, a number of mass graves of Turkish civilians were found in Turkish towns.

In September, the sides exchanged the prisoners on Green Line - a cease-fire line which separates the two communities on the island to this day.

Following the success of the operation, Turkish Federated State of Cyprus was established on Feb. 13, 1975, and Denktaş was elected president.

On Nov. 15, 1983, the Turkish Republic of Northern Cyprus (TRNC) was established.

STILL NO POLITICAL SOLUTION AHEAD

However, the island is still waiting for a political solution. The U.N. has sought a peace deal to unite Cyprus under a federal umbrella that could also define the future of Europe's relations with Turkey, a key player in the conflict. The most recent talks aimed at reunifying the island as a bi-zonal, bi-communal federation collapsed in Switzerland last July. Representatives of the European Union, the Turkish and Greek Cypriot leadership, and the three guarantor nations - Turkey, Greece and the U.K. - had participated in the intense discussions, which yielded no results.

Turkey blames Greek Cypriot intransigence for the talks' failure, also faulting the EU for admitting the Greek Cypriot administration into the union in 2004 although Greek Cypriot voters had recently rejected a peace deal. Greek Cypriot voters' had also rejected the Annan plan for reunification in 2004 in a referendum.The Greek Cypriot side wants military intervention rights expunged and Turkish troops gone to eliminate what it sees as an existential threat and Ankara's instrument of control over the island. Its argument is that no EU member country would ever need third-country security guarantees.

Turkish Cypriots see Turkey's troops as their sole assurance of protection in case a peace deal unravels and want them to stay.

The incumbent TRNC President Mustafa Akıncı has said a rethink over the need for troops could happen around 15 years after reunification. Turkish Cypriot and Turkish officials insist a Greek Cypriot call for a full troop withdrawal is a non-starter.

In April, Akıncı and his Greek Cypriot counterpart Nicos Anastasiades had met in the Island, a first after the failed talks in July 2017.

Speaking after the three-and-a-half-hour meeting with Anastasiades in the UN-controlled buffer zone in Nicosia, Akıncı said the Greek side did not show a change in their stance but that the Turkish Cyprus will no longer follow the same strategy in Crans-Montana in last July and that Anastasiades was warned against the Greek side's unilateral search for natural gas reserves and the Turkish Cyprus is the co-owner of the island's natural resources.

In addition to the existing political crisis over the division in the Island, tensions have recently escalated because of unilateral moves by Greek Cyprus, which has been commissioning Western energy companies to explore hydrocarbon resources in the Eastern Mediterranean in an area it declared its exclusive economic zone (EEZ).

However, Ankara's reactions and measures in the area have prevented these moves since it considers them to be a violation of the sovereign rights of Turkish Cyprus. President Recep Tayyip Erdoğan said in March that Turkey is determined to continue protecting Turkish Cyprus's rights to natural resources in the region. The Greek Cypriots had commissioned Italian energy company ENI, which declared the discovery of a potentially sizable gas field off the southwestern coast close to Egypt's Zohr deposit, the largest-ever discovered in the Mediterranean. However, Turkey immediately deployed warships in the region and prevented the Italian energy firm from continuing its operations there. As a result, ENI's drilling vessel left the area. Ankara argues that all steps in the waters surrounding the Island should be taken through the participation of both Turkish and Greek parties, including investments and the share of discovered resources.