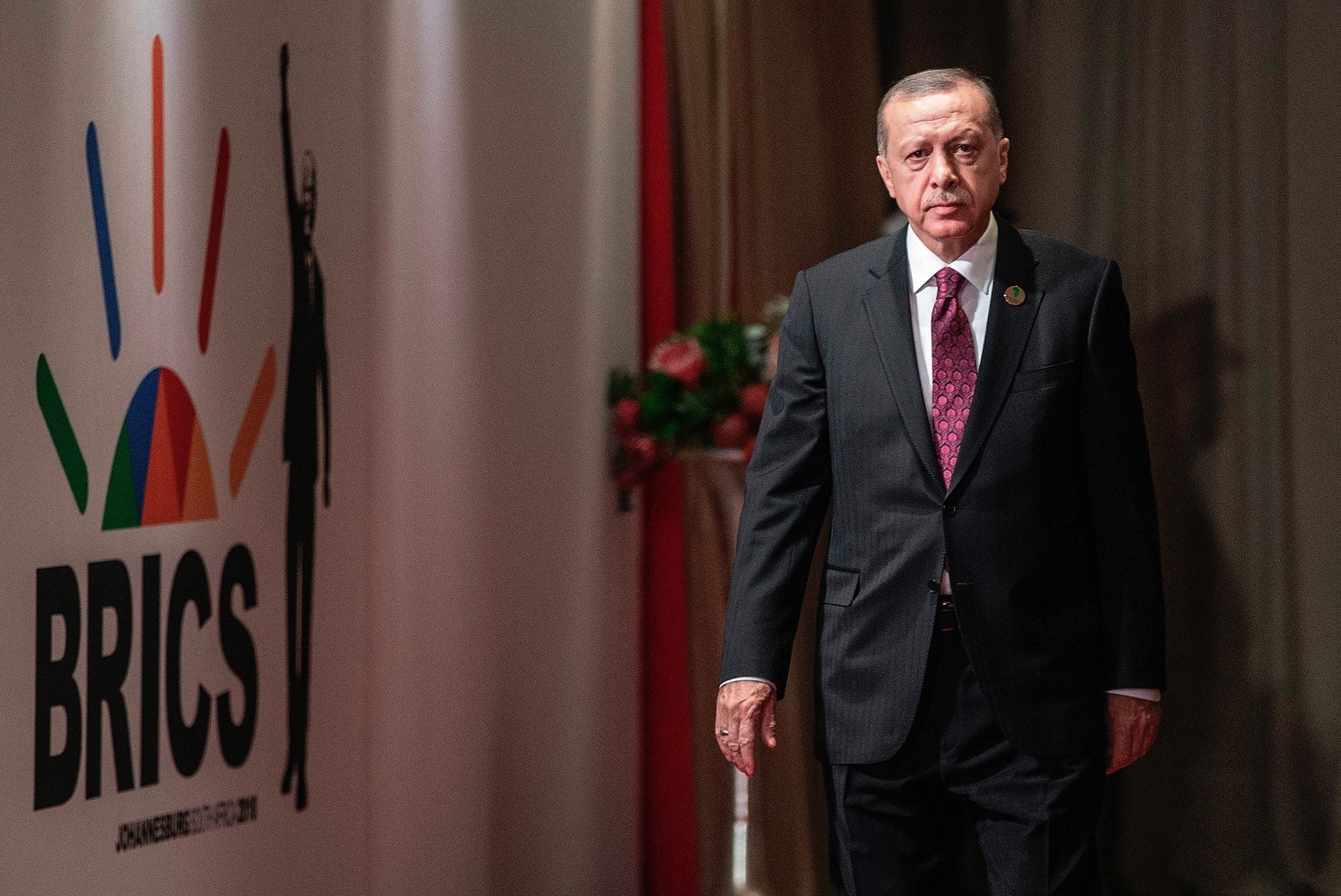 In his speech at the BRICS summit on Friday, President Erdoğan said Turkey eyes to move forward the cooperation with BRICS countries in the field of economy, investment, energy and development areas

Turkey sees the BRICS summit as an opportunity to develop a collaboration between the two sides, President Recep Tayyip Erdoğan said Friday. "We, as Turkey, want to work with BRICS countries especially in the fields of economy, trade, investment and development," Erdoğan said during his speech at the BRICS Outreach Workshop held at the Sandton Convention Center.

As the term chair of the Organisation of Islamic Cooperation (OIC), Turkey was invited to the 10th Leaders' Summit of BRICS countries, which was held on 25-27 July and hosted in South Africa's financial capital of Johannesburg.

President Erdoğan's participation in the summit was the first high-level official contact between BRICS and Turkey.

The president said he believed that the New Development Bank (NDB) and the BRICS Business Council could establish cooperation between the institutions in Turkey. "We hope the ongoing membership negotiations between the Treasury and Finance Ministry and NDB will be completed soon," Erdoğan said, suggesting that they can act jointly, both within BRICS and in Turkey in separate projects to establish a fairer, more objective and new international credit rating agency.

"We want to further improve our existing cooperation with BRICS countries in the field of energy," he added.

The BRICS group - made up of Brazil, Russia, India, China and South Africa - was established in 2006 to enhance cooperation between member countries and also other developing countries. These five countries are G20 members, along with Turkey.

The trade of BRICS countries corresponds to 23 percent of global trade, while the gross domestic production (GDP) in these countries make up more than half of global economic growth. The BRICS countries produce one-third of the global industrial products and half of the agricultural produce.

The foreign trade volume of Brazil, Russia, India, China and South Africa with the rest of the world was recorded at $5.9 trillion.

Turkey's trade volume with BRICS countries in 2017 was calculated at $60.7 billion. The country's total exports to the five BRICS members was $7.3 billion, while its imports from these countries hit $53.4 billion.

President Erdoğan also elaborated on the current global system, indicating that it does not satisfy anyone, except for a happy minority whose interests are guaranteed. "We have come to this day with economic crises repeated almost every 10 years. It is not possible for this structure to continue unchanged without reconsidering it in line with today's conditions. It is imperative that the growing weights of emerging economies be reflected in the system."

He recalled that Turkey was invited to the session as OIC term chair, underlining that he represented not only Turkey but also all the OIC-member Muslim countries. "There is a real need to advance the cooperation between the organization and the BRICS. For a fairer world, we can benefit from a south-south cooperation process in this framework," President Erdoğan continued, adding that it might be useful to evaluate the cooperation possibilities between the Islamic Development Bank (IDB) and NDB, especially in support of Africa's development efforts.

Pointing out that the world is going through a rather painful period, Erdoğan said that they all witnessed what a great wound wars, terrorist attacks, economic crises and natural catastrophes had opened on humanity in recent years.

He emphasized that they carefully watched the role that BRICS would like to undertake in the "south-south cooperation," highlighting that Turkey is one of the leading countries in the world in the field of development aid which is the most important element of this cooperation. "With the help of official development assistance of $8.2 billion last year, we were among the top-ranking countries in this area. In humanitarian aid, on the other hand, we come first by a long shot," Erdoğan noted.

Stressing that Turkey provides the most aid in all categories in proportion to national income, Erdoğan said today the country is home to more than 4 million asylum seekers, including 3.5 million from Syria and Iraq. "In an environment where many developed Western countries have condemned refugees to barbed wires, Turkey has spent $32 billion on asylum seekers," Erdoğan highlighted.

The president said that Turkey had put the issue of development at the heart of the G20 agenda as the term chair in 2015, adding that on June 4, they opened the United Nations (U.N.) Technology Bank for the Least Developed Countries.Erdoğan stressed that it is extremely important that Africa was the main theme of the 10th summit of BRICS. "The value of our country's direct investments in Africa has exceeded $6 billion. Our country's work in Somalia since 2011 is an important example of our approach to Africa in this respect," he said.