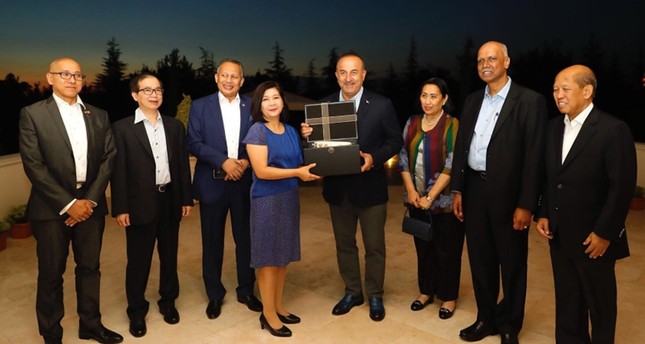 Foreign Minister Mevlüt Çavuşoğlu met ambassadors of the Association of Southeast Asian Nations (ASEAN) in capital Ankara on Sunday ahead of a summit in Singapore.

In a Twitter post that came along with a photograph with the ambassadors, Çavuşoğlu said: "We exchanged views with Ambassadors of ASEAN countries in Ankara on continuously developing and diversifying cooperation between #Turkey & #ASEAN, prior to traveling to Singapore to attend the 51st Association of Southeast Asian Nations (ASEAN) Foreign Ministers' Meeting."

The ASEAN meeting will be held Monday through Saturday.

Çavuşoğlu will visit Singapore for four days to take part in a series of events as part of the ASEAN foreign ministers' meeting, according to an earlier statement by Turkish Foreign Ministry.

As part of the meeting, the first-ever ASEAN-Turkey Trilateral Ministerial Meeting will be held following last year's establishment of a sectoral dialogue partnership between Turkey and the regional organization.

The Turkish foreign minister is also expected to hold bilateral meetings with his counterparts from other participating countries, the statement added.

Indonesia, Malaysia, Thailand, the Philippines and Singapore are the founder countries of the ASEAN while Brunei Darussalam, Vietnam, Laos, Myanmar and Cambodia are the other members.