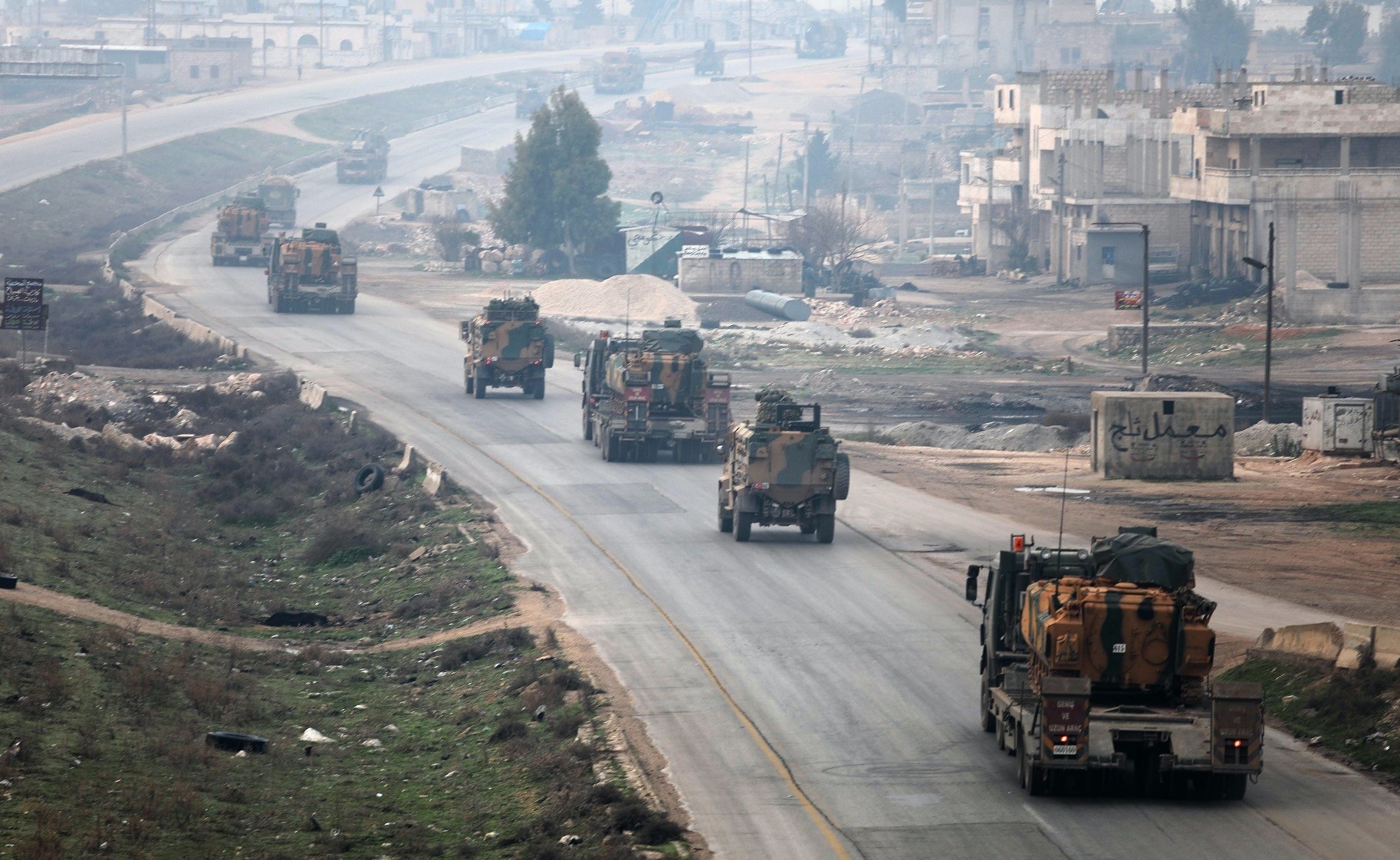 A Turkish military convoy in Idlib on Feb. 15 as part of Turkeyu2019s role in the de-escalation zones established during the Astana talks.
by Özgenur Sevinç Aug 06, 2018 12:00 am

Turkey, Russia, Germany and France, four countries with strong economies and military capabilities, are coming together to seek solutions for crises in the region, particularly Syria and Iraq. Two countries currently in the region, the United States and Iran, have, however, been left out. Having more to agree on than disagree in regional matters, the quartet is expected to bring a new dimension to regional politcs

A summit focusing on Syria and the wider region will be held in Istanbul on Sept. 7 with the participation of the most senior representatives from Turkey, Russia, France and Germany. Considering the key role these countries play thanks to their economic and military power, experts argue that this step is significant and it signals a joint initiative to create a new framework for regional issues regarding security, economy and defense. "The summit will be a turning point, and it will shape diplomatic talks for the upcoming period as a road map for concrete steps will be discussed in the summit," said Talha Köse, an academic from İbn Haldun University.

The summit was first announced by President Recep Tayyip Erdoğan on July 28 in Johannesburg, South Africa, where he attended the BRICS (Brazil, Russia, India, China and South Africa) summit. Erdoğan underlined that the four countries will take up a wide-ranging set of issues, including Iraq. "By attending the summit, countries that have strong economic and military power might be sending the message that they can sit together as regional powers to resolve some issues," said Hakkı Uygur, the deputy chair of the Center for Iranian Studies in Ankara, adding that this is the first time the four powers will hold such a meeting.

In relation to the summit, the absence of the U.S. in talks regarding significant issues draws attention. Commenting on the issue, experts pointed to recent conflicts stemming from the U.S. administration. They highlighted that Germany and France have been objecting to arbitrary steps taken by the U.S. and added that Russia and Turkey also do not welcome these steps.

Köse underlined, "These four countries might attempt to set a framework for issues of security, defense and economy that is different than that of the U.S." He said: "Recently, the [Donald] Trump administration has been having some problems with its relations with the European Union. There is a decrease in U.S. support of EU security compared to the stance of previous presidents. Thus, discussions concerning security will be the most significant part of the summit."

Referring to recent U.S. steps to impose sanctions on countries and using a threatening voice, Kemal İnat, an academic from Sakarya University, said that the Istanbul summit might enable talks to discuss ways of maintaining international stability in the face of current problems. He added, "Even though France and Germany are disturbed by the U.S.' arbitrary steps, it is difficult to estimate to wh

at extent they are in favor of an alternative political system that questions the leadership of Washington." İnat stressed that Germany and France tend to be patient "until Trump leaves."

Yet, their participation in a summit where the U.S. is absent shows that they will act more independently of Washington, İnat added.

Turkey previously had some problems with the four countries expected to join the summit. Now that relations are normalizing, European countries are directly engaging with Turkey, seeking common ground on various issues, Köse said.

He also highlighted that given its current stance toward the EU and its Brexit process, it is difficult to expect the participation of the U.K. in the Istanbul summit. He stressed that the country has long been struggling to manage the Brexit process.

While the Syrian crisis will be on the table during the summit, Iran, which has been highly involving in the crisis, will not be attending the summit as well. The underlying reason of this could be that some countries in the region have described polices followed by Iran as "sectarian and divisive."

New period ahead in Syrian crisis to be discussed

Recent developments in the Syrian civil war and the current situation of the refugees are expected to top the agenda at the summit.

"As we enter a new period in the Syrian crisis where diplomatic talks will prevail more, the Istanbul summit will be significant. Germany and France can be the countries that can contribute the most to return refugees to their homes and rebuilding Syria will be high on the agenda," İnat said.

He underlined, "It is not difficult to estimate that Germany and France will be the most eager countries to resolve the refugee crisis given the deep fissures this crisis created in European politics."

Turkey has been substantially affected by the Syrian crisis that erupted in 2011 as it shares a 911-kilometer border with the war-torn country. Turkey has been hosting over 3.5 million refugees, providing all kinds of support to alleviate the suffering of people who fled a civil war.

In the Istanbul summit, the refugee deal between the EU and Turkey is likely to be discussed. Turkey and the EU signed an agreement on March 18, 2016 to stem the inflow of refugees to Europe, which is considered unbearable by the EU. Turkey has been the main route for refugees trying to cross into Europe since the beginning of the civil war in Syria. With the agreement, irregular arrivals decreased by around 99 percent, thus preventing the loss of many lives at sea.

The deal included a 6-billion-euro aid package to help Turkey care for millions of refugees hosted in the country, and the EU promised to initially allocate 3 billion euros in its first tranche to support Syrian refugees. The deal was also to provide visa-free travel for Turkish citizens to the Schengen area; however, this has yet to be implemented as relations between Turkey and the EU have been strained and await resolution.

Turkey also has been involved in efforts to reach a political solution to the crisis. It is a guarantor country along with Russia and Iran in the Astana process, which has been deemed as more successful when compared to the U.N. brokered Geneva talks.

The trilateral Astana talks on Syria complement the U.N.-brokered talks in Geneva as both have focused on bringing an end to the civil war in Syria. Leaders and officials from Turkey, Russia and Iran have held a series of summits in Sochi, Russia to bring together the conflicting parties in Syria, including the moderate opposition and the Syrian regime, excluding groups listed as terrorists by the three countries.

Meanwhile, a meeting between Turkish, Russian and Iranian leaders on Syria will be held in Tehran.

Sanctions on Iran not welcomed by four countries

In relation to the U.S.' decision to impose sanctions on Iran, experts stated that the four countries attending the summit oppose the decision and might discuss the issue in Istanbul.

"European countries, Turkey and Russia have observed that the U.S. scratching the issue of Iran's nuclear program, which was actually resolved justly, has been causing the country to pursue more radical policies. They are in favor of continuing the deal with Iran as they believe that not only the region but the world would face great turmoil if Iran descends into chaos," İnat said and added that to prevent stoking tensions, the countries might be coming together to urge the U.S. to step back from its decision.

On May 8, President Donald Trump pulled the U.S. out of a 2015 nuclear pact with Iran reached by his predecessor Barack Obama and other world powers, the U.K., France, China, Russia and Germany and ordered tough U.S. sanctions on Tehran. The decision has drawn criticism worldwide. U.S. Assistant Secretary for Terrorist Financing Marshall Billingslea was in Turkey on Friday to participate in negotiations with Turkish authorities and hold meetings with Turkish companies that have been operating in Iran for years. As Billingslea put it, he was in Turkey "to educate Turkish companies" on behalf of the American administration. "We definitely are encouraging companies to wind down their businesses. That's why we gave them 180 days. It is up to the individual companies to make their business decisions. We are not in a situation where we try to dictate to Turkish companies what to do," he had told Daily Sabah in an interview.

In relation to the U.S.' decision, Erdoğan stated ahead of his visit to South Africa on July 25 that Turkey is against severing economic ties with Iran. Turkey is not obliged to go along with sanctions imposed by the U.S. or Britain against Iran, according to the Turkish foreign minister on July 24.

"As Germany and France are disturbed by the sanction decision on Iran, they might discuss what can be done if they decide not to implement the decision. In this case, Turkey would play a significant role as it is a neighboring country of Iran," Uygur said.